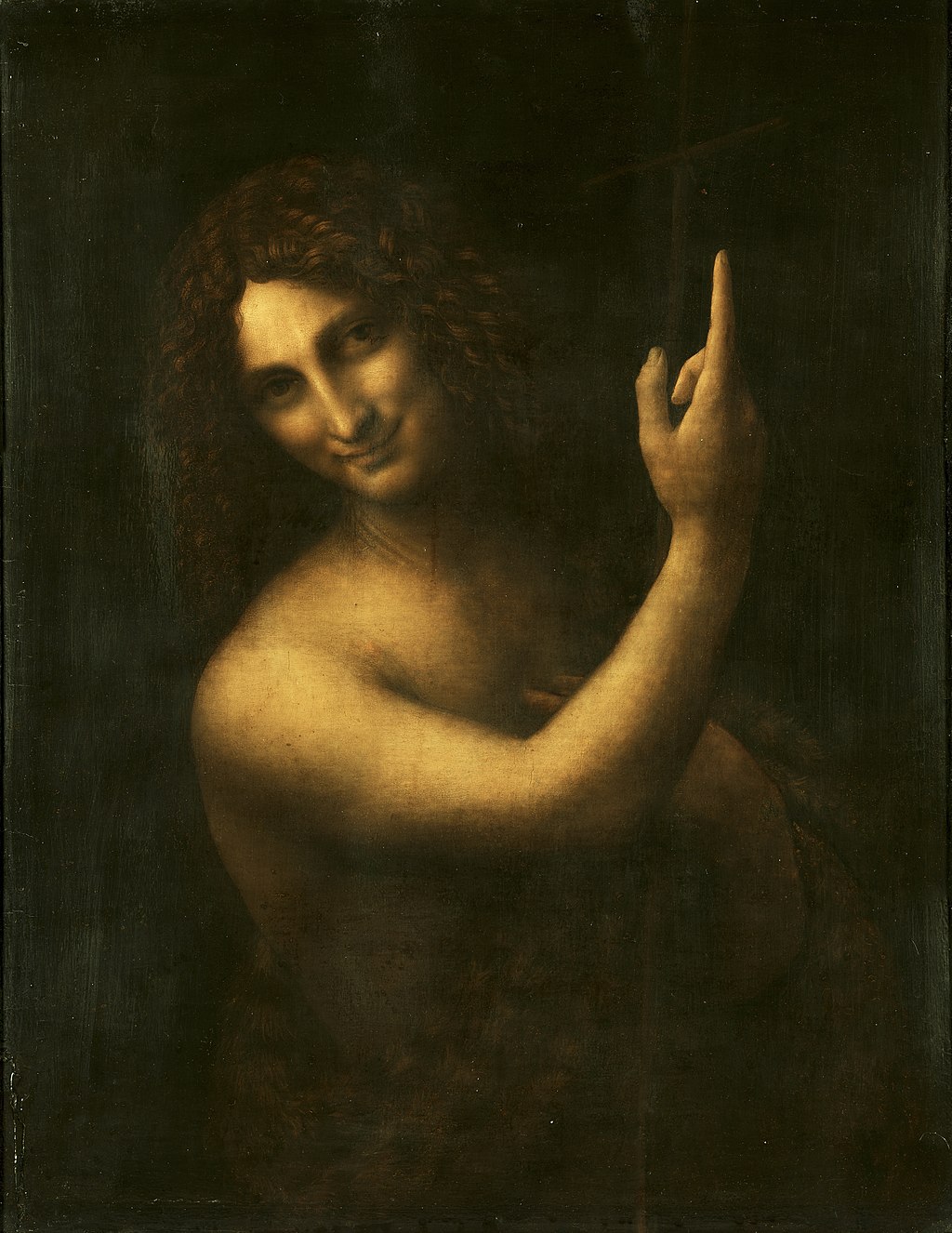 At the time of Leonardo da Vinci’s death in 1519, he had only three paintings in his possession, Saint John the Baptist was one of them. Leonardo continually worked on these, bringing the sfumato and the chiaroscuro effects to perfection. The painting is recognised as the pinnacle of his skill in the technique. On par with Leonardo’s famous Mona Lisa, it remains as one of his most mysterious and enigmatic works. The painting is held in the Musée du Louvre, in Paris.

What is Depicted in the Saint John the Baptist by Leonardo da Vinci?

The painting depicts the figure of Saint John the Baptist in solitude, appearing as if he is emerging from a dark background. He holds a reed cross in his left hand, while his index finger on his right hand points upwards towards heaven. He is dressed in fur and has long curly hair. He is smiling in an enigmatic manner reminiscent of the mysterious smile of Mona Lisa.

The figure of the saint is depicted in complete isolation in a dark, abstract space. There is no background landscape or a source of light other than the one that is shining on him.

What is the Meaning of Saint John the Baptist by Leonardo da Vinci?

St John the Baptist is a biblical figure of the New Testament. He was an ascetic prophet, who was a forerunner and contemporary of Jesus Christ. He lived very modestly, dressed himself in a coat of camel skin and ate grasshoppers and honey.

In the Gospel of John in the New Testament, he is described as a man who was sent from God, “who was not the light, but came as a witness, to bear witness to the light, so that through him, everyone might believe” ( John 1:7). Thus, he was a divine messenger, who preached and prepared the people for the coming of Christ. He was also the one who baptised Jesus Christ.

St John the Baptist is also the patron saint of Florence.

Why is Saint John the Baptist pointing up?

It has been suggested by scholars that St John’s pointing gesture is a restatement of his words “There is one who cometh after me” (John 1:27). So the figure of St John the Baptist acts like the saint in the Bible, announcing the coming of Christ to the beholder. In being so starkly confronted by the divine messenger, the beholder of the art is made to receive the message and its symbolic meaning.

Analysis of Saint John the Baptist by Leonardo da Vinci

Leonardo da Vinci’s depiction of St John the Baptist is very unusual and enigmatic. Rather than a large, iconographically complex religious work, this painting is highly simplified. Leonardo does not focus on any more details of the saint’s life, other than what is necessary to identify him. Instead, he uses only the nuances of shades of colour and contrasts of light against the shadowy background to tell the narrative. The subject of the painting is the atmosphere of divine mystery that emanates from St John as a witness to the light of God. The focus on the mood and ambivalent spirit of the work suggest that the painting was meant to be contemplated in silent devotion. The mysterious atmospheric effects of the scene are heightened through the use of painterly techniques of chiaroscuro and sfumato.

Chiaroscuro is one of the canonical painting styles of High Renaissance, which Leonardo was a master of. In painting, the technique involves the use of strong contrasts between light and dark. The effect comes to most prominence when it affects the whole composition – for example, when we see a strong illuminated figure versus a dark shadowy background, as here. The strong use of contracts also achieves a sense of volume and helps with the appearance three-dimensionality of figures and objects in painting.

Chiaroscuro also has a symbolic effect on the painting. Here, it helps with the atmospheric effect of St John the Baptist emerging from darkness, which seems infinite and is surrounding him completely. Due to the ambiguous light source which is coming from somewhere above and the way light is harmoniously falling on the figure of the saint, we get the sense that he has an inner radiance of Golden (divine) light.

Sfumato is another important art technique of High Renaissance. It involves the application of numerous layers of thin, translucent varnish and helps with the softening of transitions between colour. With it, the artist can create a whole range of shadows in the pictures, blur contours into soft transitions between light and shade, and increase the plasticity of the figures.

The sfumato adds an interesting dimension to the meaning of the painting: the figure of St John, emerging from the black background seems to be made of light, even though the scene must be illuminated by a light source beyond the pictorial space. This is completely in keeping with the subject matter, as John the Baptist is not the source, but only the witness of God’s light which is shining on him. Thus the painting gives visual form to the first verses of the Gospel according to John, which describes him as the one who was sent to bear witness to the light that shines in the darkness.

The Body and the Beholder

The painting is considered a perfect example of a depiction of a dynamic body in harmony with the composition. Leonardo was greatly preoccupied with human anatomy and how to accurately depict the movement of the body in art. In Saint John the Baptist, he achieves the ideal representation of a twisted body. The rendering of light and shadow support the dynamics of the movement and add volume to the figure, which gives it its liveliness.

The painting Saint John the Baptist also reflects Leonardo’s preoccupation with the involvement of the beholder in art. Not only is St John looking directly outside of the painting, he is also directly communicating with the audience through a hand gesture. In this way, the painter establishes a line of communication between the painted figure and the real-life person standing in front of the work.

Why is the Saint John the Baptist by Leonardo da Vinci Important?

The painting Saint John the Baptist is important because it is the final painting by the artist and displays the perfection he achieved in the techniques of chiaroscuro and sfumato. It also reflects Leonardo’s preoccupation with the art of painting and conveying a narrative through stylistic techniques instead of iconography. This would prove to be highly influential for the coming school of Baroque and Mannerist art.

Even though the work wasn’t immediately understood and the public was rather shocked at the depiction of the saint, the painting was highly influential for the later depictions of St John the Baptist. Prior to the Leonardo work, St John was traditionally portrayed as a gaunt ascetic, with long hair and a dark beard, who lived in the desert. In Leonardo’s painting, the saint is depicted with a a youthful androgynous face and long curly hair. Leonardo’s work started a new tradition and artists began to depict St John as beardless, half-naked and with youthful energy. It particularly influenced the ambiguity of bodies in Mannerism.

Who Commissioned the Saint John the Baptist by Leonardo da Vinci?

It is not known who commissioned the painting. Due to Leonardo da Vinci’s close connection with the Medici family in Florence and with John the Baptist being the patron saint of Florence, it has been suggested that it was commissioned by the Medici.

However, since the painting was one of the three works in his possession at the time of his death, he could have painted it solely for his own pleasure and experimentation with the technique.

History of the Saint John the Baptist by Leonardo da Vinci

In 1517 Antonio de Beaits saw the painting in Leonardo’s studio in France and wrote about it in his diary. The painting seems to have been a part of the French king Francis I’s collection. In 1625 King Charles of England received the painting in exchange for Titian’s Holy Family and Hans Holbein’s Portrait of Erasmus. After the death of Charles I, the painting was bought by the German banker and art collector Eberhard Jabach. Saint John the Baptist was again sold to the French King Louis XIV. Following the French Revolution, the painting became a part of the collection at Louvre, where it has remained until today.

How Old was Leonardo da Vinci When He Painted Saint John the Baptist?

Saint John the Baptist is believed to be Leonardo’s final painting. He painted it between 1513-1516, when he was in his early 60s.

The model for the figure of John was Gian Giacomo Caprotti da Oreno, better known as Salaì. He was also an artist and pupil of Leonardo from 1490 to 1518 and served as a model for many paintings and drawings.

You can buy reproduction prints of Saint John the Baptist by Leonardo da Vinci at Amazon.

Meant to be a related links section.

Other Artwork of Saint John the Baptist