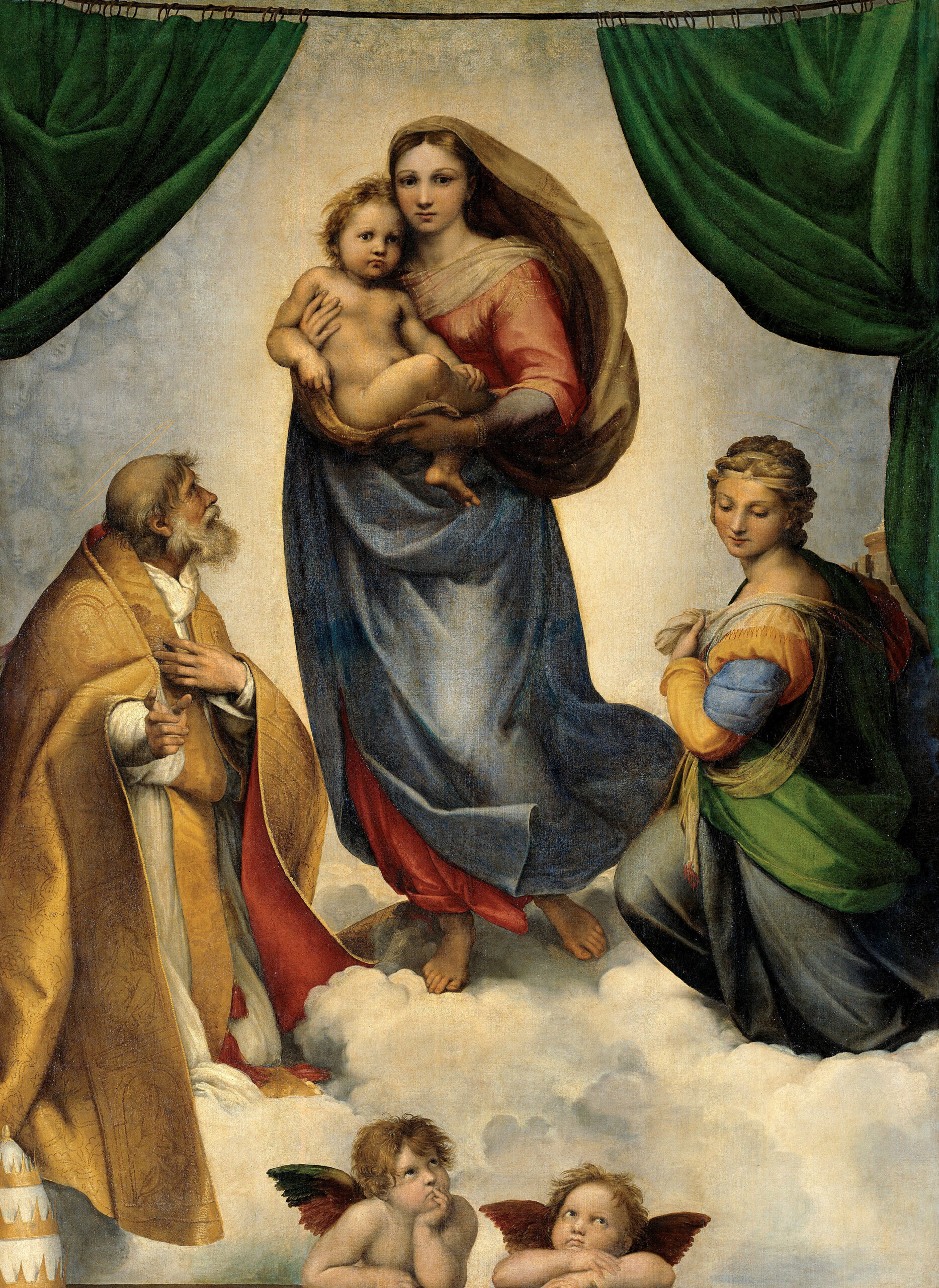 The Sistine Madonna (also known as the Madonna di San Sisto) is one of the most important and famous religious paintings by the High Renaissance master Raphael. It is an oil painting on canvas, with dimensions 265 x 196 cm. The painting was commissioned in 1512 for the church of San Sisto in Piacenza by Pope Julius II and was executed between 1513-1514. It depicts the Madonna, holding Christ Child, with Saint Sixtus and Saint Barbara on the right and left.

The painting has had a turbulent history. It was brought to Germany in the 18th century, where it achieved high prominence and had a great cultural impact. During World War II, it was saved from the bombings and stored a tunnel. It was later taken to Moscow by the Red Army. The painting returned to Germany in the 1950s, where it been has displayed in the Gemäldegalerie Alte Meister in Dresden ever since.

What is Depicted in the Sistine Madonna by Raphael?

This extraordinary work depicts a trio of figures – The Virgin Mary in the middle in a blue robe, with Saint Sixtus on her left, and Saint Barbara on her right. They form a triangular composition, with Madonna at the top, holding the infant Jesus. Saint Sixtus is looking up at her, his right hand pointing upwards. On the opposite side of the Virgin, Saint Barbara is looking downwards. At the bottom, two winged putti are resting their elbows on the frame of the picture, looking distractedly at the three figures above them.

The figures inhabit an imaginary space, where they are standing on a bed of clouds. The composition is framed by heavy green curtains, which have been opened to reveal the heavenly scene, reinforced by the golden light that is enclosing Mary’s figure. In the background behind the Madonna and the curtain, countless faces of angels can be seen. At the very bottom on the left, the Papal tiara rests on the frame of the painting. 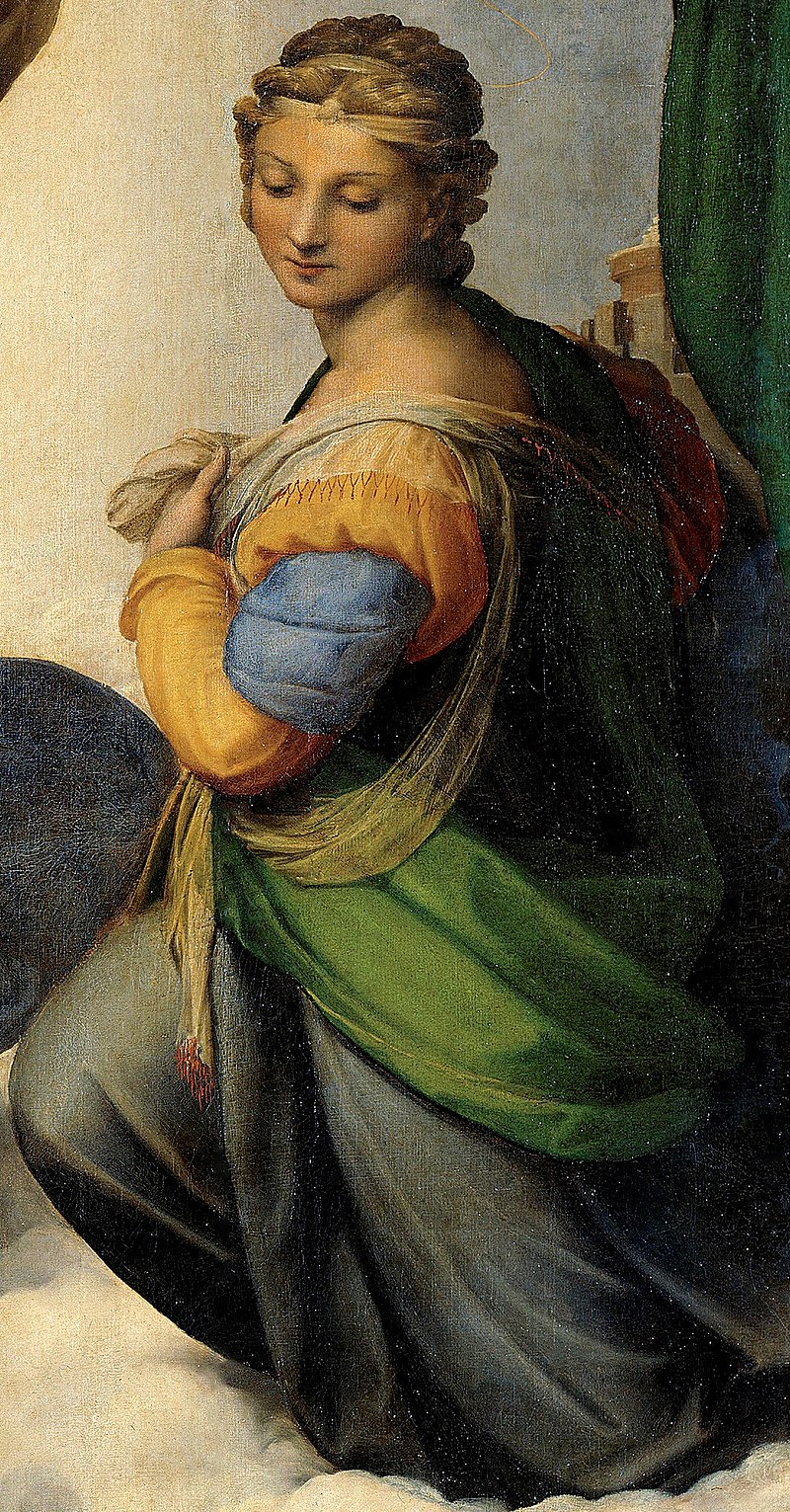 Analysis of Sistine Madonna by Raphael

Since the painting was intended as an altarpiece for the basilica church, the scene is taking place above where the church congregation would be sitting. As was custom in the Renaissance, the artist has taken the spectators into account and the figures of the two saints are suggestively interacting with the real people (sitting in the church below). The Virgin appears as if she is descending from the heavenly space, symbolically bringing the Christ Child down to the world. The gesture of St Sixtus and the downward gaze of St Barbara are also directed towards the church visitors.

For many years, scholars were puzzled by the somber and almost frightened expressions of Mary and her child. Recent research has discovered more about the original location of the painting, which gives some insight into the mystery. On the far end of the San Sisto church, in the chancel, stood a crucifix, which the mother and child are directly looking at. The crucifix symbolises death and the upcoming suffering and torture of Jesus Christ. The expressions of horror and fright on their faces are thus a reaction to the foreshadowing of the child’s fate.

What is the Meaning of Sistine Madonna by Raphael?

The commission of the painting required that it depicts Saints Sixtus and Barbara, as the two saints were venerated at the high altar in San Sisto. St Sixtus was a martyr from the 3rd century, as was St Barbara. Behind her, we see the tower where she was locked up by her father upon her conversion to Christianity.

The two angels with wings at the bottom of the painting are known as putti. They are usually depicted as chubby male children, usually naked and sometimes with wings, which is why they are often confused with angels. However, putti have their origin in the pre-Christian ancient world, where they were a common motif on sarcophagi and vases. They were usually depicted fighting, dancing, playing sports or instruments. They were revived in the Renaissance, largely thanks to Donatello, when their pagan origins were fused with Christian elements, and they were placed in new contexts, such as musician angels.

The two winged putti at the bottom have become famous in their own right. Ever since the painting came to Dresden in the 18th century, their figures, isolated from the rest of the image, have been heavily marketed and reproduced. For over 200 years, they have been appearing on illustrations, greeting cards, postcards, wrapping paper, souvenirs, T-shirts, socks, notebook covers and more. In effect, they are probably one of the most famous details from a painting in the Western world, on par with the fame of Mona Lisa (though they have achieved legendary status long before the Mona Lisa sparked the attention of the larger public in the 20th century).

Throughout centuries, the two putti have have inspired countless legends. According to one story, they were children who came to watch Raphael paint. The Italian artist was struck by their postures and transfixed gazes, and added them to the painting exactly as he saw them in his workshop. Another story tells that he was inspired by two children he saw on the street, looking wishfully through the window of a baker’s shop.

Putti are essentially decorative and ornamental, and appear in both secular and religious works. They establish a curious connection to the viewer, because they never partake in the events or narrative depicted in a painting. In the Sistine Madonna, as elsewhere, they resemble the real-life act of the spectator, looking at what is happening in a painting, without taking part in it.

The model for the Madonna is assumed to be Margherita Luti, the daughter of a Roman baker. She was Raphael’s mistress and model for many paintings.

Why is the Sistine Madonna by Raphael Important?

Raphael painted the Madonna countless times in his career. The Sistine Madonna is his last painting of the subject and also one of his most acclaimed works.

The painting exemplifies many distinctive features of High Renaissance painting. The swirling green drapery frames the composition, which helps to direct the spectator’s eye to the scene. In Renaissance paintings, such framing reflects the idea that a painting opens the window to an ideal world. This is why the aim is to make the visual space as real and three-dimensional as possible.

The figures loosely form a triangle, which is an important technique that enhances the perspective and depth in a painting. In this case, the Madonna is positioned deeper into the pictorial space than the two saints. Additionally, the winged putti at the bottom have their arms placed on the frame of the painting, as if they are coming out of the painting into the real world. In this way, the image blends the boundaries between the imagined and the real world.

During the Renaissance period, the function of the triangle is not only compositional, but also symbolical, as it represents a spiritual hierarchy.

The composition of figures is exceptionally balanced and well-placed. Each one of the bodies occupies their own space, while at the same time forming a harmonious pictorial relationship through the interaction of their gestures and poses. Harmony in the composition of figures and a rich, balanced colour palette are two key design features exemplified by Raphael and the High Renaissance.

History of the Sistine Madonna by Raphael

The painting was commissioned by Pope Julius II, in honour of his deceased uncle Pope Sixtus IV. It was intended as an altarpiece for the church of the Benedictine Monastery San Sisto in Piacenza. For almost 250 years, the painting remained in the original site.

In 1754 it was bought by King Augustus III, Elector of Saxony and King of Poland, who was anxious to have a work by Raphael in his collection. The monastery was in big financial difficulties at the time, and they agreed to sell the painting for a large sum of money – at the time and for many decades to come, it was the highest price paid for a painting.

Upon arrival to Dresden, Germany, the painting achieved new prominence almost immediately. The Sistine Madonna was hailed as a supreme exemplar of High Renaissance art, and was even ascribed divine elements. On one hand, a myth of the so-called Raphael’s Dream emerged. According to the legend, Raphael received a heavenly vision that enabled him to paint the Madonna as divinely as he did. On the other hand, stories about the painting’s supernatural powers started circulating. Apparently, many viewers were transfixed to a state of religious ecstasy upon viewing the painting. This nearly miraculous power of the painting made it into an icon of 19th century German Romanticism. Moreover, the painting was a favourite motive in magazines, embroidered pictures, advertisements, caricatures and scrapbooks of the middle class in the Biedermeier period in the German Empire. It achieved the status of a cult object, with travellers coming from all over Europe to see the masterpiece and purchase reproductions. The painting also influenced many cultural icons, such as the famous writers Goethe, Nietzsche, Wagner and Dostoyevski. The latter described the painting as “the greatest revelation of the human spirit”.

During the bombing of Dresden in the second World War, the painting was rescued and stored in a tunnel in Sächsische Schweiz, south-east of Dresden. Towards the end of the war, it was taken by the Red Army and transferred to the Pushkin Museum in Moscow. In 1955, the Soviet Union decided to return the painting to Germany. The painting’s return caused an international controversy, as rumours circulated that the painting had been damaged in Soviet storage. The accusations have been vehemently denied by Soviet art historians and museum personnel. During the 2012 exhibition which celebrated the 500 anniversary of the painting, curators in Dresden stated that they do not believe the painting was damaged.

After its return to Germany, the painting was restored for display in the Gemäldegalerie Alte Meister in Dresden. Today, the divine Madonna retains its legendary status and is considered one of the highlights, not only of the art collection in Dresden, but in the whole of Germany.

Where to Buy Prints of the Sistine Madonna by Raphael

You can buy prints of the Sistine Madonna by Raphael at Pictorem.

Other Artwork of the Madonna