The Annunciation is a Renaissance painting thought to have been painted by a young Leonardo da Vinci circa 1472, while he was an apprentice at Andrea del Verrocchio’s workshop. The Annunciation was painted in oil and tempera on a large poplar wood panel with dimensions 98 x 217 cm. The painting depicts the popular Biblical moment of Annunciation, when archangel Gabriel appears to Mary and tells here she will give birth to Jesus Christ.

The details of the painting’s commission and early history remain obscure. The painting was brought to the Uffizi gallery in 1867 from the monastery of San Bartolomeo a Monte Oliveto, outside of Porta San Frediano in Florence. It was usually attributed to early Renaissance painters from Florence, Domenico Ghirlandaio or Verrocchio. However, in 1869, Karl Eduard von Liphart, an important figure in the German expatriate art colony in Florence, recognized the painting as a work by youthful Leonardo. The painting has remained in the Uffizi gallery ever since. It has become one of the best known portrayals of Annunciation in Western art and a treasured early work by Leonardo.

What is Depicted in the Annunciation by Leonardo da Vinci?

The painting depicts the Biblical moment of Annunciation, when archangel Gabriel appears to Mary and tells here she will give birth to Jesus Christ. In the painting, Mary is sitting outside, reading in front of a lectern in a lush Florentine palace garden. Angel Gabriel appears and kneels before her, blessing her with his right hand and offering a lily in his left. 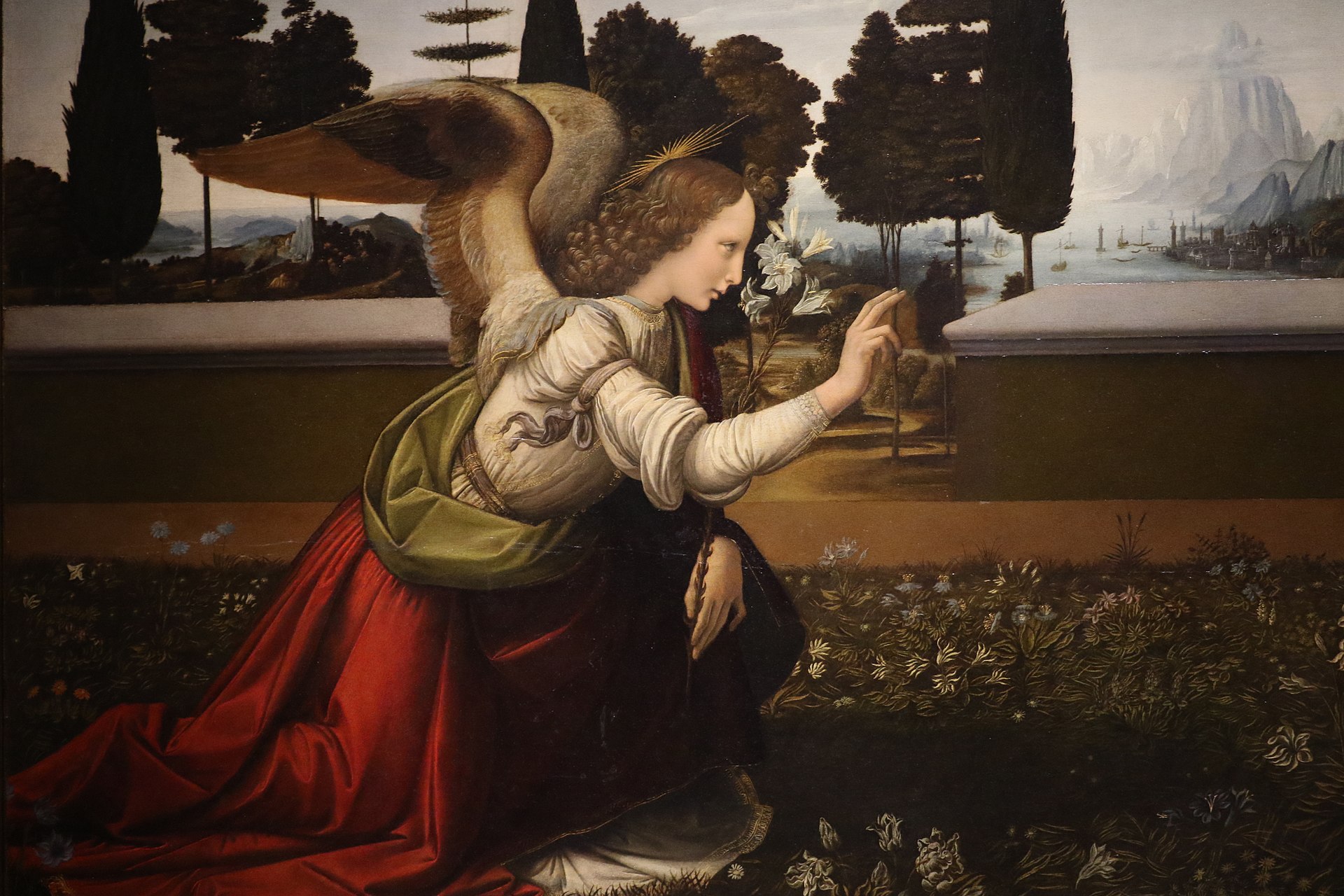 The scene is set in an earthly, natural setting. In the background, we see an extensive panoramic view of a Tuscan landscape with cypresses, pines, and olive trees, a seascape with ships in the middle, and a fantastical mountain in the center in the back. A massive stone wall separates the garden from the landscape. There is a small opening in the wall around angel’s hand, where one can directly enter the landscape.

What is the Meaning of the Annunciation by Leonardo da Vinci?

Analysis of the Annunciation by Lenonard da Vinci

The composition of the scene is innovative and different from standard depictions of the Annunciation. Traditionally, Mary (recognized by the blue dress) is seated and reading in an interior setting, with a partial view of a landscape beyond through a window. Leonardo however, sets the scene in an earthly, open courtyard garden, which extends from an indoor bedroom of the Renaissance palace on the right. By going against the tradition and having the Biblical scene take place in a contemporary and everyday environment, the artist naturalizes the otherwise mystical and supernatural event.

The scene in the garden is also known as hortcus conclusus (“enclosed garden”). The name refers to the Song of Songs in the Bible, where it symbolises Virgin Mary’s virginity. Mary’s purity is also symbolised in the lily flower (also known as the Madonna lily) that the angel holds in their hand. The lily is also the symbol of the city of Florence. The hortus conclusus contains a variety of spring flowers that are associated with religious moments. Besides the white lily, we can also identify white champions, flax, daisies, morning glories, lavenders and claimants, all further symbols of the Virgin’s innocence and purity. Passionflowers, iris, and forget-me-nots, allude to Mary’s love and mourning.

Leonardo’s preoccupation with the real presence of the divine can be seen in the attention to corporeality of the angel Gabriel. He is not an illusion or a product of the Virgin’s imagination, but a real solid presence, as suggested by his shadow on the grass. The folding of his clothing as well as the wings are based on real-life studies by the artist.

The scene is drawn according to rules of mathematical perspective. The perspective leads the eyes diagonally from the bottom of the painting toward the mountain top, which is the vanishing point. The perspective lines can also be seen in the tiled pavement and bricks of the house.

The painting’s perspective takes into account the original position of the spectator, which would have been slightly below and to the right. This is why the Virgin’s right arm appears too long.

Why is the Annunciation by Leonardo da Vinci Important?

The Annunciation by Leonardo da Vinci is an important youthful work by the artist and an early testament of his signature style. We can already see evidence of his preoccupation with the theory of optics and perception in painting, which he developed into revolutionary painting techniques: sfumato and atmospheric perspective.

The perspective in the Annunciation is not limited to the architectural elements that guide the eye. Leonardo was the first to develop the so-called atmospheric or aerial perspective. This technique creates the illusion of depth in a painting by depicting distant objects not just smaller, but also less colored, less detailed and more blue than the objects in the front.

The background of the painting displays an early example of Leonardo’s sfumato (smoky) technique. Sfumato was developed by Leonardo and is intended to capture the diffusion of air. The painterly illusion is achieved by employing a range of color tones, from light to dark, so that the eye doesn’t perceive boundaries or lines, but a continuous flow of air.

Who Commissioned the Annunciation by Leonardo da Vinci?

Nothing definitive is known about who commissioned Leonardo da Vinci’s Annunciation, or what was the intended purpose of the painting. Since the painting was brought to Uffizi from the Olivetan monastery San Bartolomeo, scholars have suggested it might have been the monastery’s monks who commissioned the painting for their sacristy after the church’s renovation in 1472.

How Old was Leonardo When He Painted the Annunciation?

The Annunciation is the earliest major work by young Leonardo. He painted it when he was just 20 or in his early twenties, while he was serving as an apprentice to Verrocchio.

Other Interesting Facts about the Annunciation by Leonardo da Vinci

The Annunciation is a painting widely attributed to Leonardo da Vinci when he served as an apprentice to Andrea del Verrocchio. However, there is no definitive consensus as to which parts of the painting Leonardo painted and which parts were painted by Verrocchio. We know that Verrocchio used lead-paint and more heavy brush strokes in other works. Leonardo on the other hand used light brush strokes and no lead in his painting. Subsequent X-rays have shown that some parts of the painting contain lead, while others do not. A preparatory drawing for the angel’s sleeve has also been found and attributed to Leonardo. The background landscape and the angel are unilaterally attributed to Leonardo.

Where to Buy Prints of the Annunciation by Leonardo da Vinci

You can buy reproduction prints of The Annunciation by Leonardo da Vinci at Pictorem.

Other Artwork of the Annunciation