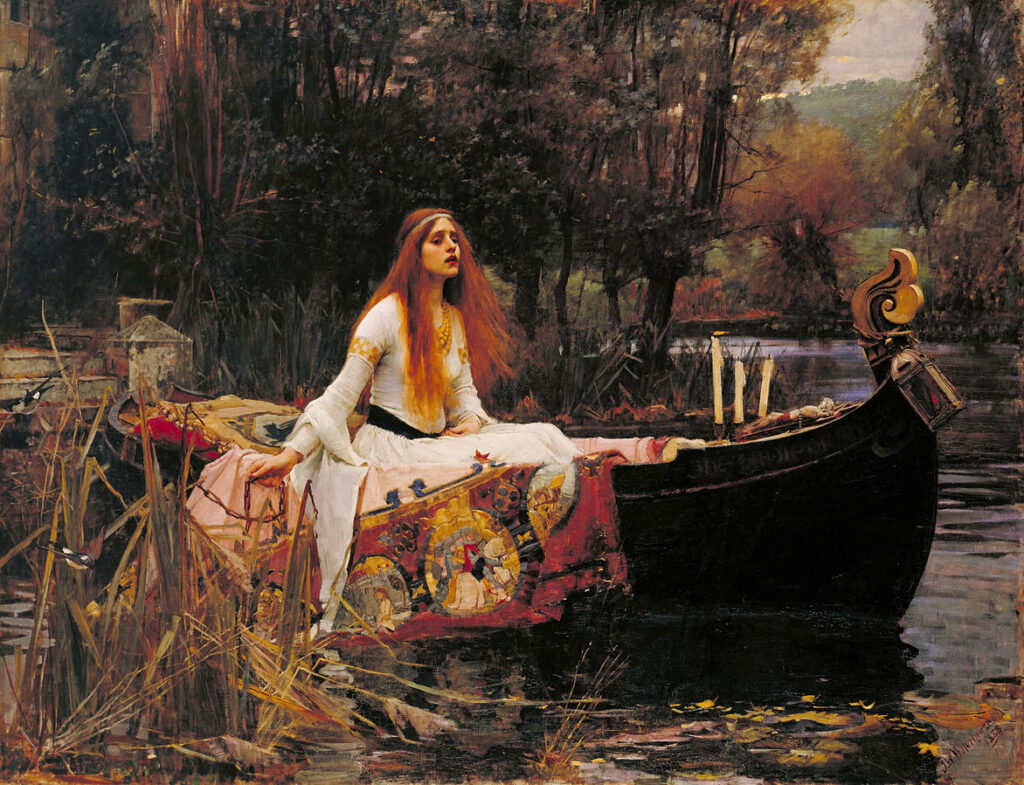 The Lady of Shalott is an oil on canvas painting completed by artist John William Waterhouse (1849-1917) in 1888. The canvas measures 72 x 91 inches and depicts a scene from Lord Alfred Tennyson’s (1809-1892) poem of the same name. The painting was exhibited at the Royal Academy Exhibition in 1888. Later, the painting was owned by Sir Henry Tate (1819-1899) and was donated to the Tate Britain in 1894 creating a public collection. It is currently on display at the Tate Britain.

Waterhouse’s style initially reflected the classicism being taught at the Academy. Though Waterhouse was barely born at the time the Pre-Raphaelite Brotherhood was disbanding, his later works began to reflect the influence he received from the Pre-Raphaelites, particularly Sir John Everett Millais (1829-1896).

The Pre-Raphaelite Brotherhood was founded by three British artists, William Holman Hunt (1827-1910), Dante Gabriel Rossetti (1828-1882), and Sir John Everett Millais, who were students that met at the Academy. These artists disliked the direction that the classically leaning Academy was taking in regard to art. They sought to take inspiration from Quattrocento Italian art and Medieval art and literature believing that it reflected truth in nature more than the idealized art of Raphael (1483-1520). Waterhouse was one of a few younger painters who took up the Pre-Raphaelite banner during the Pre-Raphaelite revival in the latter part of the century.

What is Depicted in the Artwork?

John William Waterhouse’s The Lady of Shalott is based on Lord Alfred Tennyson’s Lady of Shalott. Tennyson’s lyrical ballad was first published in 1832. In true Pre-Raphaelite fashion, Tennyson’s poem was based on a 13th century Italian poem “Donna di Scalotta.” The story told is one taking place near the legendary Camelot, the court of King Arthur. In art history, scenes from the Arthurian legend were common as a Pre-Raphaelite subject. This Arthurian legend features Elaine of Astolat who lived on an island called Shalott. Thus, she became known colloquially as the Lady of Shallot. Elaine lives in a tower down the river from Camelot.

Elaine is cursed to never look out of the window to the outside world. She can only look through a mirror to see outside. Elaine spends her days weaving images into a tapestry. The story she weaves is one of unrequited love. However, one day she sees the Knight Sir Lancelot in the mirror. She cannot resist him and looks outside the window at him. The mirror cracks enacting the curse. Elaine rushes down the steps from the tower to the docked boat. However, because of the curse, she will not make it to Camelot. Elaine sings as she rows down the river in a boat. In that boat she will die.

Depicted in Waterhouse’s 1888 painting are the final moment before Elaine launches the boat down the river. Waterhouse chose to paint part IV of Tennyson’s poem. The lines read:

And down the river’s dim expanse
Like some bold seer in a trance,
Seeing all his own mischance –
With glassy countenance
Did she look to Camelot.
And at the closing of the day
She loosed the chain, and down she lay;
The broad stream bore her far away,
The Lady of Shalott.

This painting is the first of three paintings Waterhouse created from the legend of the Lady of Shallot. Waterhouse’s sketchbook reveals early pencil sketches for three scenes from this poem. The three works were painted in 1888, 1894 and 1915. A last and final scene, representing the moments after her death, was intended but never completed by Waterhouse.

Upon the canvas, the young woman sits in the boat, her hand clasped around the chain that moors the boat to the dock. In moments, she will release the boat from the dock, and drift downstream to her untimely demise. Victorian audiences would have read Tennyson’s poem and known the outcome of the story. However, Waterhouse chose to paint this moment before everything is final. Of the three candles on the end of the boat, only on remains lit. The other two having been snuffed out. This perhaps symbolized the nearness of her untimely demise. However, one light still remains, painted sideways aloft in the wind.

The lady sits in the boat, her white dress juxtaposes distinctly with the darker tones of the landscape. Underneath her and draped across the side of the boat is the very tapestry that she wove earlier in the story. The tapestry features the tower and the knights led by Sir Lancelot. On the prow of the boat, the title, ‘The Lady of Shallot’ has been carved into the wood. A single lantern is tied to the end of the boat. A pair of swallows fly in the left foreground symbolizing the ominous ending to the tale.

Waterhouse’s realistic painting abilities can be seen in the highly realistic landscape. Like Pre-Raphaelites before him, Waterhouse painted the natural landscape with accuracy, attempting to perfect his representation of nature. During this period, in the 1880’s Waterhouse was experimenting with en plein air painting or painting outdoors. The landscape in The Lady of Shalott represents a quintessential image of the countryside, likely near Somerset or Devon, where Waterhouse frequently visited. Waterhouse’s technique of precisely painted detail was highly prized when the work was exhibited. In fact, scholars have noted that Pre-Raphaelitism was a specifically English phenomenon that distinguished this work as English. Critics for the Art Journal noted the similarities that Waterhouse’s canvas shared with Pre-Raphaelite works.

Critics had questioned the looser brushstroke in Waterhouse’s work, which was closer to French Impressionism than a more English National Art. However, Peter Henry Emerson’s photographs of the English Landscape prove the similarities. In particular, Dr. Chloe Portugeis cites the photograph “Ricking the Reed” by Peter Henry Emerson as a key example of how what Waterhouse painted shares a more English sentiment than French.

For, The Lady of Shalott it seems Waterhouse looked to the work of Sir John Everett Millais. John Everett Millais’s Ophelia, which was also a gift by Sir Henry Tate to the Tate Britain, shares with The Lady of Shalott distinct elements of Nineteenth century Pre-Raphaelitism. Not only did Waterhouse’s marshy background resemble that of Millais close observation of nature, but like Millais, Waterhouse shows a woman in the depths of despair. Additionally, Elaine’s red hair is also reminiscent of Millais’s red-haired maidens. Unlike the bright jewel tones of Millais’s early Pre-Raphaelitism, Waterhouse here is replacing jewel tones with a darker coloration.

What style of art is Waterhouse?

Waterhouse’s earlier works were academic leaning following the classical influence of artists like Sir Lawrence Alma-Tadema (1836-1912) or Sir Frederic Leighton (1830-1896). Therefore, Waterhouse was first influenced by classicism. His Sleep and His Half Brother Death of 1877 reflects this notion. Set against a classical architectural backdrop, Waterhouse’s canvas features a preciseness of line and composition in the academic style. His early life in Rome has been referenced as a reason for the Italian settings and backdrops in his early paintings.

His later works reflect the revival of Pre-Raphaelite artistic style within the art world. Though he was painting decades after the initial Pre-Raphaelites, Waterhouse responded to many of the same calls to action. His paintings take influence from Quattrocento Italian art, and Medieval art. Waterhouse’s later works show a keen interest in the accurate representation of nature and his saturated colors and rich detail fit well within Pre-Raphaelitism.

What does The Lady of Shalott symbolize?

The Lady of Shalott is said to symbolize unrequited love. The crucifix on the boat symbolizes sacrifice and there are many symbols referring to death, such as the swallows and the dead leaves. Some scholars have also suggested that the lady choosing her own fate and controlling the boat makes commentary on the agency, or lack thereof, of women in 19th century Britain. Women in 19th century England had little to no individual agency and were typically confined to domestic spaces, longing for the outside world as did the Elaine.

Other Artwork by the Artist