Cecile Veilhan is a French painter born in Nantes, France, in 1965. The artist was best known for painting pieces that imbibe charm, elegance, finesse, and innocence using feminine characters. Cecile was also known for paintings that revealed situations that every woman could relate to. Cecile’s art draws you into a world of femininity and its beauty in all aspects. The paintings are often candid and gracious, and tend to show unexpected elements of the subjects of the paintings.

What does Cecile Veilhan Paint About?

Cecil Veilhan paints vivid paintings of women dressed in polka dots, checkered and flowery dresses in bright colors.  The women in Cecile’s Art were also painted as attentive to others, loving, and often evoked feelings of tenderness.  Cecile has stated that the women in her paintings were “timeless” and “idealized”.

What was Cecile influenced by?

The happenings of the 1980s influenced Cecile’s art. An era of global capitalism, unique music, creative fashion, and the end of the Cold War significantly influenced artists who grew up at that time, including Cecile. Additionally, several contemporary artists and art icons whom Cecile admired also influenced her work.

What Art movement is Cecile Veilhan associated with?

Cecile Veilhan’s is associated with several art movements during her career as a visual artist including: Neo-Expressionism, Neo-Geo, and a movement known as The Pictures Generation.

Below, please find some of Cecile Veilhan’s artwork: 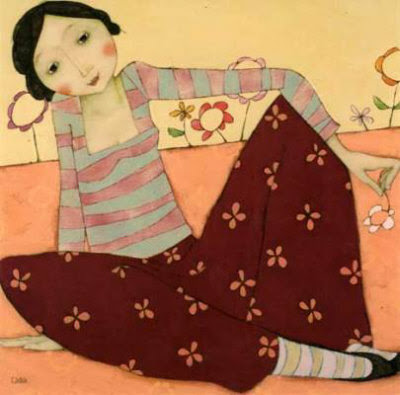