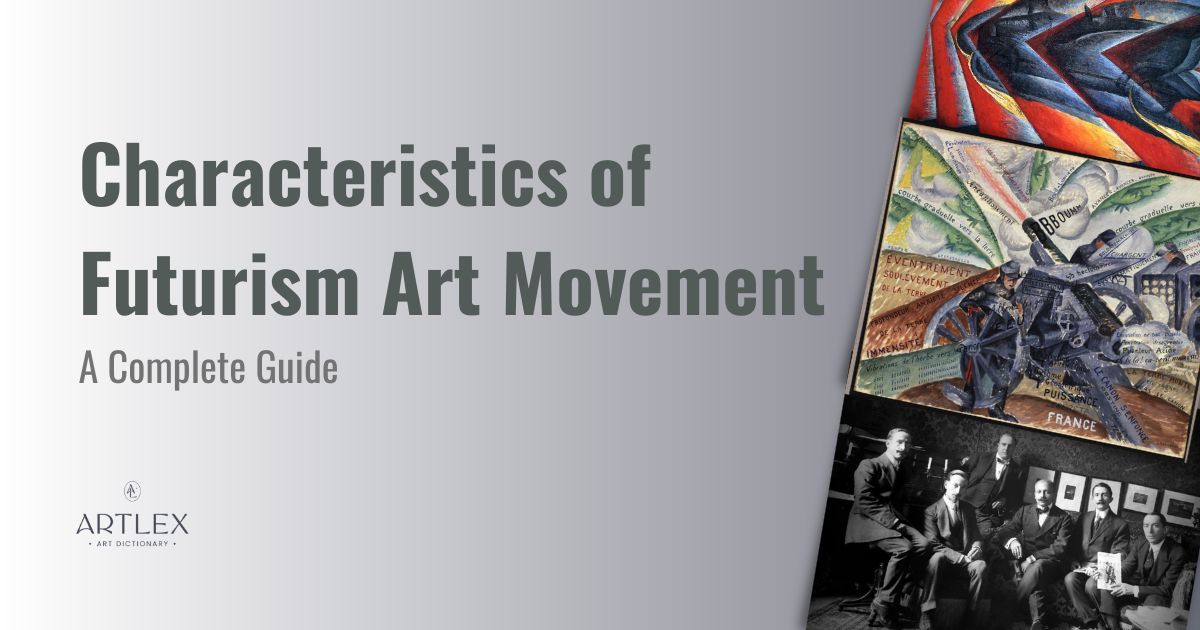 Futurism is an avant-garde art and social movement that originated in Italy. Several manifestos were created in the wake of futurist philosophy and the most important was the Manifesto of Futurism, published by Filippo Tommaso Marinetti in 1909. The attitude towards the past that the Futurist artists had was based on an uncompromising rejection of tradition. On the other side, Futurists were glorifying the cult of youth, industrialization, speed, technology, and modernization. Futurists were often emphasizing the violent component of the struggle for cultural and wider social change. Futurism developed in literature as well as in painting, sculpture, architecture, industrial design, music, film, dance, and fashion.

Major characteristics of futurism include numerous manifestos, modernization processes, fascination with speed, relation to the past, glorification of war, and fascist ideology.

Futurists used the manifesto form as an important channel of communication with a wider audience. Whether published as separate publications or in the daily press, these texts successfully introduced society to the ideas of the Futurists. In addition to organizing futurist evenings and exhibitions, publishing a manifesto stands out as an important feature of this group’s activities. Manifestos were written in the fields of literature, painting, sculpture, music, architecture, and film.

The process of modernization stands out as a dominant feature of futurist philosophy. The idea of ​​modernization is present in all aspects of futurist creativity and can be singled out as the most recognizable element of Futurism aesthetics. Modernization processes in the field of industrialization, urban planning, and architecture, as well as the development of automobile traffic, were a continuous inspiration for the Futurists. As a movement that had greater ambitions than purely artistic action, the Futurists aspired to social transformation in a broader framework. That transformation should have been achieved on the one hand by modernizing the economy and cultural practices and on the other hand by revolutionary and violent means of war that were part of the Fascist political program.

Futurists emphasized speed as a symbol of the technological revolution and transformation of the first decades of the twentieth century. That speed was reflected in the bustle of the city streets, in the rapid industrial production, and in the increasing number of bicycles and cars on the roads. In the legacy of cultural history, the Futurists saw archaism and complete inadequacy for the modern moment. The phenomenon of speed was emphasized by the Futurists as an authentic impulse of the moment in which they live.

4. Relation to the past

Futurists had an extremely negative attitude towards the past and cultural heritage in general. They believed that focusing on the past is a burden when realizing the full social potential in the current moment. They had a special animosity towards the institution of the museum, which they believed should not exist. They did not observe the history of art through the prism of achieving continuity. The only exceptions were the Cubists and Post-Impressionists, whose work the Futurists appreciated and which greatly shaped their artistic expression.

The Futurists unequivocally supported the war. In the Futurist Manifesto published in 1909, Filippo Tommaso Marinetti labeled war as the world’s only hygiene. Futurists considered a violent revolution necessary. That wave of violence was supposed, according to their beliefs, to cancel the burden of the legacy of not only Christian but also Roman civilization in order to clear the way for the creation of a new society. That society would rest on the ideas of modernization and technological progress, and in order to achieve that, society cannot be contaminated by the past. The idea of ​​national unification was also very close to the Futurists. Italian nationalism was part of the wider European political climate, which in this case referred primarily to the multinational Austria-Hungary, from which Italians and Italian territory were to be freed. War is glorified there as a legitimate means of struggle. Many Futurists died in the first years of the First World War.

The ideological determination among the Futurists was not homogeneous. The socialist and anarchist currents were much smaller in comparison to the nationalist pro-fascist majority. The glorification of war seen in Futurist art resulted in many leading artists from this movement dying in the early years of the war. Filippo Tommaso Marinetti, before the end of the First World War, in 1918, formed the Futurist Political Party. That party soon became part of Mussolini’s Italian Fascism of Combat. Marinetti, as one of Mussolini’s prominent collaborators, together with Alceste De Ambris, writes The Manifesto of the Italian Fasces of Combat, better known as the Fascist Manifesto. Marinetti’s idea of ​​a futuristic artist as a framework for the development of Italian post-war culture was never fully realized. With the introduction of the term “degenerate art” from Germany into the Italian public space, avant-garde futurist art was gradually marginalized.

Filippo Tommaso Marinetti formulated the idea of the language of the modern age in the manifesto Destruction of Syntax–Wireless Imagination–Words-in-Freedom. The new futurist language had to be structured so that it would be precise, clear, and economical in the first place. Such a language is devoid of adjectives and adverbs and introduces mathematical and musical symbols into use. The dynamics of the futurist language would rest on verbs that would always appear in the infinitive as well as on the frequent use of onomatopoeia.

Marinetti’s concept known as words in freedom opened up space for a new relationship between text and visual material. These two contents are no longer opposed but united through the idea of ​​visual poetry. New typographical solutions made it possible for the form of the poem to look completely unconventional. This approach meant a change not only in the domain of the visual but innovation in the position of the reader who now needs to look “at” and “through” the printed text. Tullio d’Albisola in the book Words in Futurist, Olfactory, Tactile, Thermal Freedom from 1932 combines the revolutionary aspects of the visual capacity of the text and the tactile values ​​of the metal on which the text is printed as well as the smell of the ink used on that occasion, all for the purpose of the overall mental- empirical experience of poetry.

The art of Post-Impressionism greatly influenced Cubism and Futurism. Paul Cezanne claimed that all phenomena in nature can be represented through three geometric bodies: a sphere, a cone, and a cube. Cubism will develop this principle and create a new revolutionary painting language that will later be appropriated by Futurism.

Besides Paul Cezanne, the artist whose influence is most visible is Georges Seurat. Seurat’s innovative approach to color known as Divisionism brought a scientistic attitude to the palette that was based on the optical research of the time. Divisionism meant applying paint to the canvas in its pure form, that is, without previously mixing the pigment on the palette. Georges Seurat believed that by appropriately positioning contrasting colors, an improved effect of image brightness is achieved. The divisionist technique was strongly represented both among the Cubists and among the Futurists.

Cubism had a crucial influence on the artistic expression of Futurism. Although these two movements developed almost simultaneously, Cubism, as the oldest avant-garde movement, influenced the path of visual development of Futurism. That influence was reflected in continuity with the post-impressionist ideas of inverse perspective and divisionism. Cubism also introduced a language of strong geometrization with a tendency towards abstraction, which the Futurists built upon. The collage technique often used by the Futurists was invented by the Cubists. One of the most significant characteristics of futurist painting is authentically cubist and refers to a mobile perspective.

Aeropainting is an authentically futurist approach to painting. This approach transformed traditional landscape painting by introducing a component of displaced view or bird’s eye view. Traveling by plane allowed this kind of access to the landscape. In 1929, the article Perspectives of Flight and Aeropainting was published in the Turin magazine Gazzetta del Popolo. This article or manifesto of Aeropainting was signed by Benedetta Cappa, Fortunato Depero, Gerardo Dottori, Filippo Tommaso Marinetti and others.

The static pastoral characteristic of landscape painting was replaced by a new futurist dynamic. That dynamic is characterized by the idea of ​​a double movement, the movement of the plane itself, which opens the scene in a different way every moment, and the movement of the brush with which the painter modifies the scene while creating it. The scenes of Umbria often served as inspiration for this painting. Landscape painting is especially valued in the social climate of heightened patriotic and nationalistic feelings that favor the glorification of the geographical environment of a particular country. Aeropainting was thus often used for propaganda purposes, by transposing Mussolini’s image into different Italian landscapes.