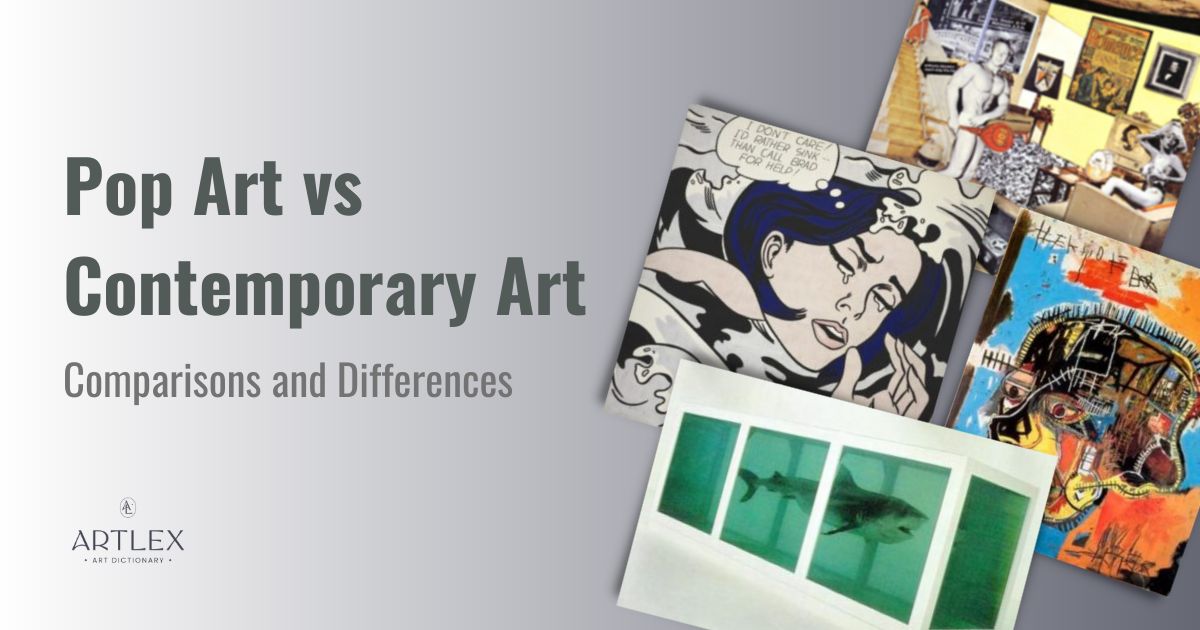 Pop art is a unique blend of fine art, along with popular and commercial culture. The Pop art movement began in England, during the 1950s, with artists Eduardo Paolozzi, Richard Hamilton, and Peter Blake. Although it has English roots, Pop art was always based on American culture. Pop art spread into New York, where artists like Andy Warhol, Roy Lichtenstein and Yayoi Kusama practiced their Pop art style.

Contemporary art is the “art of now” with artists spanning the globe. The movement cannot be defined but can best be described as anything created in our lifetime. It extends from graffiti art to video and digital works. Some of the most famous contemporary artists include Nam June Paik, Damien Hirst, Tracey Emin, Jean-Michel Basquiat, Jeff Koons and Banksy.

Pop Art vs. Contemporary Art: What is Art?

What is considered art? Both Pop art and contemporary art have challenged the answer to this question. Pop art caused a radical shift in the art movement and caused endless debate. For the first time, Pop art merged fine art with popular culture.

Similarly contemporary art transcends traditional art concepts. It too provokes challenges through thought about who is considered an artist, the materials and tools used, along with the style and presentation.

Questions began for American Pop art artist Andy Warhol (1928-1987) with his 1962 silkscreen painting, Campbell’s Soup Cans. How could a simple grocery store object be the subject of a real piece of art? Audiences dismissed the work, but the media were quick to turn this into a national debate.

Pop art was a challenge to traditional art in other ways. Pop art artists mass produced their art, making it available for public consumption. Many felt “real art” was a one-of-a-kind piece that belonged in museums.

In the contemporary art world, artists such as the Young British Artists (YBA), a collective that started in London, in the 1980s, created works that many did not consider art. Arguably, the most famous artist from the group is Damien Hirst (1965-).

Hirst’s The Physical Impossibility of Death in the Mind of Someone Living (1991), is a contemporary artwork by the artists. It was created by encasing a tiger shark, captured by a fisherman in Hervey Bay, Australia, in a glass tank of formaldehyde.

Both Pop art artists and contemporary artists have made viewers ask, “ Is this really art?”

Pop artists and contemporary artists have learned the art of self promotion through controversy.

Warhol mixed religion with popular culture which was considered outrageous. In Warhol’s Gold Marilyn Monroe (1962) the Pop art artist elevated the actress to god like status soon after her death, in August 1962. Showing how people worshipped her, he also demonstrated as the price of her fame.

The Marilyn Diptych, also from 1962, appears on two panels and clearly references Christian paintings in the title. The word diptych refers to a hinged wooden altarpiece. In presenting Marilyn Monroe in this way, Warhol invited the viewer to worship her, while highlighting his own struggles with the Catholic faith.

In The Marilyn Diptych, Warhol uses repetition. The same image of the actress, taken from the publicity photo for the movie Niagara, is repeated 50 times. Twenty-five are painted in color representing her life and vitality, while 25 are painted in black and white illustrating her death. The work was crafted by projecting the image onto silkscreen. This provoked further criticism. Not only had the artist not created the image, but he was also profiting off the movie star’s suicide.

Japanese Pop art artist Yayoi Kusama (1929-) became globally known, after her 1966 Venice Biennale installation and performance art entitle Narcissus Garden.  She hadn’t even been invited. Instead, she placed 1500 stainless steel and highly reflective mirror balls on the lawn. Dressed in a golden kimono, she simply sold the balls for $2 each. A sign said, “Your narcissism for sale!” Eventually she was asked to leave and escorted away by the police.

Always a savvy self-promotor, Kusama arrived in New York in 1958, where she immediately began approaching galleries and artists to help her. Her first mirror room installation was shown in New York, in 1965, entitled Mirror Room-Phalli’s Field at Castellane Gallery, in New York. It featured a mirrored room filled with stuffed phalluses, painted with red dots.

Young British Artists held exhibits meant to shock and promote controversy such as Freeze (1988) and Sensation (1997). Together they rejected what was considered traditional art.

Hirst has always been an artist to seek attention. The public and critics are both appalled and fascinated by his work. Death and mortality are two key focuses of his contemporary art.  More recently, in 2007, Hirsts created For the Love of God , a human skull cast in platinum, embedded with 8601 diamonds. While the work on contemporary art cost 14 million British pounds sterling to make, the work was sold for 50 million British pounds sterling.

Emin dragged her bed into the gallery and added all the items that surrounded it during her four days of self-imposed confinement. This was the fall out after a bad break up. There were used Kleenex, condoms, and dirty underwear, as part of her contemporary art.

Pop art and contemporary art reflected and reflect the times it was and is created in. For example, American Pop art artist Andy Warhol worked as a commercial artist, prior to switching to fine art and Pop art. After World War II consumerism was rampant in the United States, as families yearned for the good life. Warhol captured this American urge to shop, by using every day branded images in his work such as Campbell’s Soup Cans (1962), Coca-Cola 3 (1962) and Brillo Box (1964). Warhol also considered celebrities as commodities, using their images in repetitive style.

While Warhol created his art from the prospective of living in the environment, his contemporaries in the United Kingdom produced images of American consumerism, through the eyes of a nation that had been devastated and were still recovering from the war.

In Eduardo Paolozzi’s I was a Rich Man’s Plaything (1947), the main image in the collage is a pin-up girl taken from an American magazine. The artist obtained it from an American soldier in Paris and this gave him an insight into American life through a European lens. Other “American” images are incorporated including a cherry pie and a logo from the Cocoa-Cola company. A World War II bomber also appears, along with the word “Pop!” as a sound emitted from the gun in a man’s hand.

The anonymous British street artist who goes by the pseudonym Banksy, has become an extraordinary figure in contemporary art, by taking his art to the street. Providing social commentary on the world, Banksy’s work focuses on global issues and politics. The contemporary artist has chosen anonymity, so the focus remains on the message within the art, and not the artist, removing any possibility of celebrity.

Part of the Bristol underground scene, Banksy started  out freehand, but he later moved to stencil for speed. The artist has also created canvas versions of his street art. Some of Banksy’s visual contemporary art images include rats, monkeys, policemen and the Queen. Famous works include. Love is in the Air ( Flower Thrower) (2003), Kissing Coppers (2004), Napalm Girl (2004-2005), and Girl with Balloon (2006). Also created in 2006 was Well Hung Lover, also known as Naked Man Hanging from a Window or simply Naked Man.

The Pop art movement and contemporary art are from two different time frames. Pop art began in the 1950s, in London, England. It quickly spread throughout the United States. American pop art started in New York and then into Los Angeles. Pop art was not only made by British and American artists, but artists from other countries also began to produce Pop art by living in one of the regions where Pop art was being made.

What defines Pop art?  There are many different styles and characteristics of pop art and they vary from artist to artist, but most share at some of the following characteristics:

Conversely, contemporary art defies definition. It is made all over the world, using the style and medium the artist selects.

Nam June Paik (1932-2006) is a contemporary Korean/American artist known as the father of video art. He first started displaying the work in the new medium in 1963. One of his most popular works is Electronic Superhighway (1995), a video installation at the Smithsonian Art Museum.

The work measuring 15 by 49 feet, features 336 television sets, all showing video clips representing the 50 states across the United States. Images change rapidly and clips show potatoes for the state of Idaho, cowgirls in Texas, and The Empire State Building in New York. Movie clips are also blended in, such as the images from Wizard of Oz to represent the state of Kansas.

Technology has given contemporary artists more to work with. Some contemporary artists use traditional methods of  drawing, painting, and sculpting. Others used mixed media, in endless combinations. Additionally, art has been taken to the streets, where walls and sidewalks become the canvas.

Urban graffiti became a recognized art form in the late 1970’s and 1980s, with New York based contemporary artist Jean-Michel Basquiat (1960-1988) leading the way. Creating his work initially in marker and spray paint, he would use walls and sidewalks, with the tagline SAMO (Same Old Shit).

In Basquiat’s famous work Horn Players (1983) the artists used acrylic and oil paintstick for his three canvas panels. Paintsticks blend oil and pigment with wax and enable an artist to draw, paint, and sketch. This medium was popularized by Basquiat and other street artists of the time.

Contemporary artists are keeping Pop art going, after it fell out of favor in the late 1970s. A central figure in the movement called Neo-Pop is American artist Jeff Koons (1955-). The contemporary artist is famous for incorporating everyday images into his work such as toys, characters from cartoons, and birthday decorations.

The Balloon Dogs (1994 to 2000) takes the images of balloons crafted by clowns at children’s birthday parties as inspiration for large mass-produced sculptural works. In doing this, Koons shows how elaborately children’s birthday parties are celebrated in the United States. The works are available in blue, magenta, orange , yellow and red, and have sold for millions of dollars. Other similar animals followed including monkeys, swans, and rabbits. These works and other works by Koons are highly polished and reflective,  similar to Yayoi Kusama’s mirror creations.

Like Warhol and many Pop art artists, Koons also continues to use icons from popular culture in his contemporary works. Michael Jackson and Bubbles (1988) at the San Francisco Museum of Modern Art, is a giant porcelain sculpture. Of the work in gold and white Koons said, “I wanted to create him in a very god-like icon manner.” This draws parallels to Andy Warhol’s works of Marilyn Monroe.

Additionally, some of the original Pop art artists are still alive today and bringing Pop art style to a new generation. Some of these artists include Yayoi Kusama, Alex Katz, and Peter Max.

What other Art Movements are Similar to Pop Art?

Pop art is rooted in Neo-Dada, a movement that started in New York. Artist Robert Rauschenberg was a major influencer. Neo-Dada was influenced by Dadaism and artist Marcel Duchamps and his readymades. Neo-Dada is the art movement which links together Abstract Expressionism Art Movement and Pop Art Art Movement.