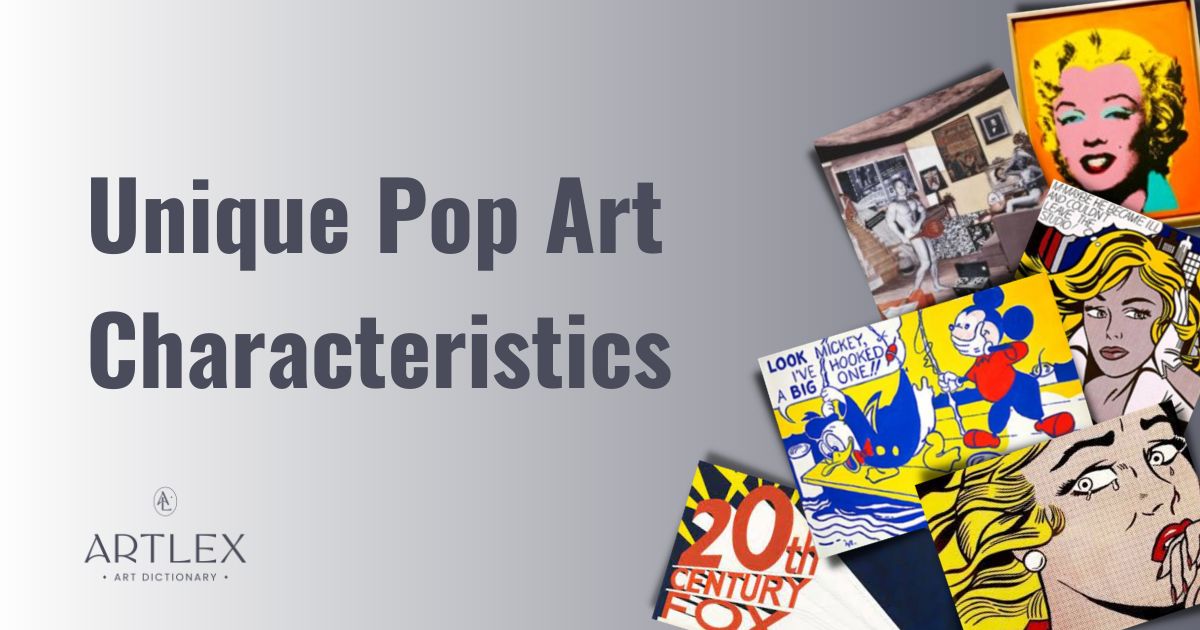 Pop art is an art movement that began in the mid-twentieth century and presented viewers with a blend of fine art with popular culture. It incorporated everyday objects into painting, sculpture, silkscreen, collage, and multimedia works.

In this article we will define the characteristics of pop art, including everyday imagery, a merging of fine art with popular culture, a criticism of consumerism, bold colors, the use of pulp culture, humor, appropriation, repetition, monumental imagery, and regional differences.

Pop art artists used everyday imagery. With a focus on consumerism, items found on grocery store shelves, and household appliances, were all part of pop art. Photos from newspapers, magazines and illustrations were utilized in Pop art. Brands and logos were also incorporated. Youthful pop culture found its way into imagery, through rock stars, movies stars and politicians.

2. A Merging of Fine Art and Popular Culture

Pop art dislodged the public’s perception of what art was. While most Pop art artists trained in fine art, they blurred the borders between fine art and popular culture. British Pop art artist Peter Blake illustrated this concept expertly with his Pop art painting On the Balcony, made to look like a collage. This Pop art shows people surrounded by fine art and symbols of popular culture such as magazines.

3. A Criticism Of Consumerism

Just what is it that makes today’s home so different, so appealing? by English Pop art artist Richard Hamilton, uses glamorized images from American pop culture, for his collage, to illustrate the imagined need to continually buy more.

Pop art artists employed bold colors from the primary color palette including vivid red, bright yellow and royal blue. They also used unexpected tones not found in nature, along with neon and fluorescents. Pop artists created art that was meant to immediately grab the viewer’s attention.

Famous Pop art artist Andy Warhol’s (1928-1987) Orange Marilyn, created in 1962, just after her death, is a cropped composition of the movie star’s face. This Pop art artwork has a background of flaming orange. Marilyn’s skin tone is an unnatural pink, with painted red lips, and heavy turquoise eye shadow, to match her collar. Her trademark platinum blonde hair is depicted in sunshine yellow.

Roy Lichtenstein (1923-1997) often painted women with bright yellow hair and bold red lips, influenced by the comic book images they came from. In his Pop art painting M-Maybe, from 1965, the viewer takes in a bit more background than Lichtenstein generally shows. He uses color as punctuation against graphic black and white. The night sky is royal blue, the partially visible staircase is red, and the window pain is the same yellow as the woman’s hair.

Pulp culture or artwork that takes on the style of another medium was well represented in the Pop art movement. Roy Lichtenstein took illustrations from popular comic books and made them into cropped paintings, without storylines. He used bright colors, dark outlines, and Ben-Day dots exactly as comic books were presented.

Pop art was created for the fun and frivolity of youth. Subjects were injected with humor. Even more serious topics were made fun of. WHAAM! by Pop art artist Roy Lichtenstein takes the subject of war and simplifies it. The pilot on the left canvas is thinking “I pressed the fire control… and ahead of me rockets blazed through the sky.” The other aircraft explodes with the word Whaam!

Many pop artists took images either from photography or print and incorporated them directly into their works. Artists like Lichtenstein would take illustrations from comic books and books, while only slightly re-imagining them. He would paint the images cropped and remove background context, thereby omitting any storyline.

Pop artists like Andy Warhol used repetition as a recurring theme within their Pop art artwork. Using silkscreen, he could quickly reproduce images and therefore the quantity of art. Think celebrity Pop art images of Marilyn Monroe and Elvis, or everyday household objects such as Campbell’s soup cans.

Pop art artistic creations could often be extremely large. James Rosenquist’s (1933-2017) training in billboard painting was the starting point for the colorful, large, fine art collages he painted. Many of these works were over 20 feet wide.

F-111, painted between 1964 and 1965, contains subject matter about the Vietnam War. It measures 86 feet long. The main image of a fighter pilot plane is broken into 23 panels, with other images of commercial products in between. These Pop art paintings include spaghetti, Angel food cake, a Firestone tire, and a beach umbrella. In total there are 59 interlocking panels.

Rosenquist created F-111 for his first solo show, which was held at Leo Castelli Gallery, in New York. There it was spread over a space of four walls, surrounding the viewer. Today, the monumental Pop art artwork hangs at MoMA, in New York: 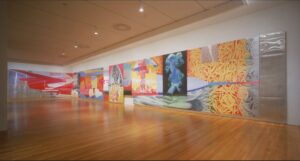 Los Angeles produced a different style of Pop art than other regions like New York. Consumer goods were less of a focus. Items referencing Southern California lifestyle were prevalent, with images of surfboards and motorcycles. It provoked feelings and attitude about the geographical mood that was less defined than the east coast.

Comparisons were evident during the first exhibit of Pop art in the region at the Pasadena Art Museum, in 1962. It was entitled New Paintings of Common Objects, which unified artists including visiting pop art artists Warhol and Lichtenstein, as well as locals Ed Ruscha, Phillip Hefferton, Wayne Thiebaud, Joe Good, and Robert Dowd. Ruscha placed many signs in his work, noting the signs everywhere in Los Angeles.