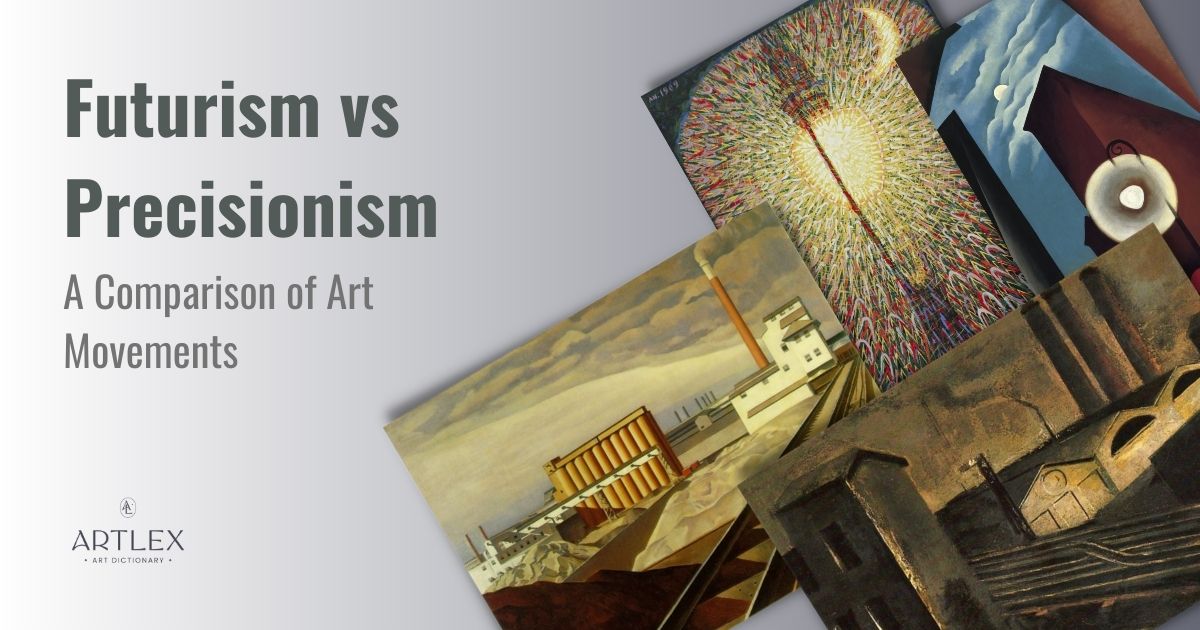 Futurism is an avant-garde art and social movement that originated in Italy. Several manifestos were created in the wake of futurist philosophy and the most important of them was the Manifesto of Futurism, published by Filippo Tommaso Marinetti in 1909. The attitude towards the past that the Futurists had was based on an uncompromising rejection of tradition. On the other side, Futurists were glorifying the cult of youth, industrialization, speed, technology, and modernization. Futurists were often emphasizing the violent component of the struggle for cultural and wider social change. Futurism developed in literature as well as in painting, sculpture, architecture, industrial design, music, film, dance, and fashion.

The characteristics of futurism include: the rejection of traditional value frameworks in the field of culture, ie striving for art freed from the weight of its past, highlighting youth as a key capital of social development, technology, modernization of urban spaces, the dynamism of industrial plants, exploring speed through the representation of objects such as cars or airplanes.

Precisionism is the first originally American modernist movement. This movement was created after the First World War, and it achieved the most significant successes during the 1920s and 1930s. The Precisionists relied on the experiences of Cubism, Futurism, and Purism in forming their artistic language. These artists drew inspiration for their work from American reality, which was characterized by the architecture of skyscrapers, suspension bridges, and spaces that were created on the wave of accelerated industrialization.

The term Precisionism was coined by art historian Alfred H. Barr in 1927. Although the range of influences that European Avant-garde movements had on the Precisionists was very diverse and unquestionable, the Precisionists themselves did not invoke this continuity. They insisted on authentic American qualities in their work. With their paintings, they created a kind of chronicle of the American interwar reality, which, in addition to the post-war wave of progress, modernization, great scientific achievements, and architectural changes, also marked the period of the Great Depression and economic crisis. The Precisionists began exhibiting together in New York at the Whitney Studio Club. During the 1920s they also exhibited at the Charles Daniel Gallery. After the closure of this gallery in 1932, Edith Halpert’s Downtown Gallery became the venue for this group.

The similarities between Futurism and Precisionism are numerous, including: geometrization, dealing with the topic of industrialization, as well as the representation of urban and rural environments using divisionist means.

The post-impressionist influence, more precisely Cezanne’s principle of geometrization, based on the reduction of all scenes in nature to three basic geometric bodies – the cylinder, the sphere, and the cone, was of key importance for the development of modern painting. The Cubists developed this idea and then influenced the Futurists and, through them, the Precisionists. The investigation of the authentic nature of painting through its two-dimensionality was supported precisely by the geometrical structuring of the scene. The topics dealt with by the Futurists and Precisionists, namely urban changes, mass construction, and industrialization, favored the development of an artistic language based on geometry.

The phenomenon of industrialization is one of the most common themes of both Futurists and Precisionists. The accelerated industrialization process of Europe and America that took place during the early twentieth century opened up space for reflection on the capacities of societies for change both on the cultural and economic levels. The artists of both these movements saw the process of industrialization as the basis for the emancipation of the broadest masses who migrated en masse from rural to urban areas precisely because of working in factories. The Futurists loaded these meanings more intensively into their art, while the Precisionists recorded their impressions of such scenes that surrounded them.

Futurism vs. Precisionism: Presentation of urban and rural spaces

Although urban spaces were much more present as subjects, both Futurists and Precisionists dealt with scenes from rural areas. The dynamism of the experience of city life, skyscrapers, street lights, bridges, railways, and industrial plants are not opposed to the rural area as an isolated pastoral concept, but on the contrary, they form two sides of the same experience. Many artists including Charles Sheeler, Niles Spencer, Sanford Ross, and Ralston Crawford explored themes that were closer to a rural or pastoral setting such as country roads, farmhouses, barns, and cottages. Futurists formulated the authentic language of landscape painting, Aeropainting, which moved geometrization and experiment with perspective to diverse landscapes.

In addition to the Cubist principles of composition structuring and geometrization, the Futurists and Precisionists adopted post-impressionist methods when it comes to the relationship to color. Creating special dynamics of colored fields was of great importance for artists from both movements because they rejected the traditional approach to light and shading. Therefore, the colored fields were supposed to generate different degrees of lightness or darkness through the dynamics of complementary relations. The Futurists especially emphasized the divisionist method because it enhanced the impression of pulsation and movement within the painted scene. Precisionists were focused on matching fields of complementary colors with the aim of building the appropriate atmosphere formulated by those colors, given that the human figure and any action in Precisionist paintings are most often absent.

The differences between Futurism and Precisionism refer to the degree of social engagement, the American or international sphere of action, the absence of manifestos, and the relationship to figuration.

Social engagement was one of the main values of the Futurist movement. Futurists did not consider their art to be self-sufficient but saw it as part of a wider cultural transformation that they considered necessary for society. Through various forms of organization, the printing of publications, performances, and gatherings at futurist evenings, these artists continuously worked to increase the visibility of their ideas. Those ideas became very aggressive and close to the fascist movement through which many Futurists operated during the interwar period. Precisionist harmonious and geometrized urban and industrial scenes, however, did not contain a critical component. Precisionism was not characterized by the engagement promoted by Futurism or Social Realism. Artists who belonged to this direction did not strive for escapism, but for a different, distant presence in the present moment.

Futurism vs. Precisionism: American or international sphere of action

Precisionism emerged and developed as an authentically American phenomenon. The American experience that the artists who belonged to this group sought to formulate through the medium of painting further situates this art in a local context. Although the visual poetics of Precisionism arose from the experience of the European avant-garde movements of Cubism and Futurism, the ideas of Precisionism did not spread outside the United States. Futurism, on the other hand, had a distinct international resonance, from Eastern and Western Europe to North and South America.

Futurism vs. Precisionism: Absence of manifestos

The Futurists considered the publication of the manifesto an important activity for the development of the movement. By writing and publishing the manifesto either in the form of an independent publication or as an article in a newspaper, the Futurists communicated with a wide audience that could be reached most effectively by these means. Manifestos were written in many fields such as literature, painting, sculpture, music, architecture, etc. The precisionists were not a hierarchically structured organization, nor did they have tendencies for cooperation in that form. Although the Precisionists exhibited together and unequivocally shared a system of values ​​and a vision of artistic creativity, the very process of writing and publishing the manifesto was absent.

Futurism vs. Precisionism: The absence of a human figure

Figurative painting was highly developed in Futurism. The Futurists deviated from many of the codes that belonged to academic painting and that related to the formal elements and composition of the painting itself, while in the field of genres this deviation is not so visible. Thus, still lifes, landscapes, individual and collective portraits, and the scene genre remained present. Revolutionary geometrization with colorism that enhances the illusion of dynamism was particularly successfully presented in portrait compositions. Precisionists, on the other hand, usually excluded the human figure from their paintings. By focusing on the atmosphere of a given scene as an overall feeling and not an individual experience of a painted figure, the Precisionists created a peculiar principle of distanced observation of visual sensations.

How did Futurism Influence Precisionism?

Futurism had a significant influence on the formation of the visuality of Precisionism. As a prominent European avant-garde movement, Futurism quickly achieved international visibility. The process of modernization, industrialization and technological revolution are topics initiated by Futurism in the sphere of art. Although the Precisionists were not inclined to point out the connections with Futurism and to acknowledge this influence, as well as the Cubo-futurists in Russia, it is undeniable that these connections existed and are visible not only in themes but also in the formal approach to painting, geometrization, divisionist methods or experimentation with perspective.

What other Art Movements are Similar to Futurism and Precisionism?

Movements related to Futurism and Precisionism are Cubofuturism, Constructivism, and De Stijl.