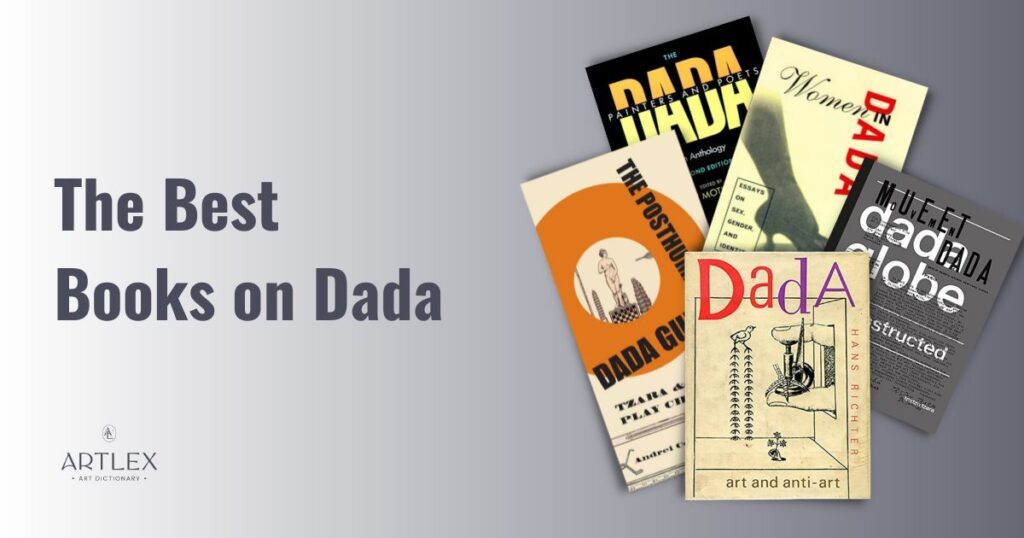 Despite Dada being a relatively short-lived art movement (it only lasted about 6 years), Dada has continued to fascinate artists to this day.  In order to grasp the absurd nature of Dadaism, finding the best books on dada can be a helpful step.  Below we’ve laid out a variety of books on Dada from different perspectives.  Picking up a few of these will help give you a comprehensive viewpoints on this most unique of art movements. 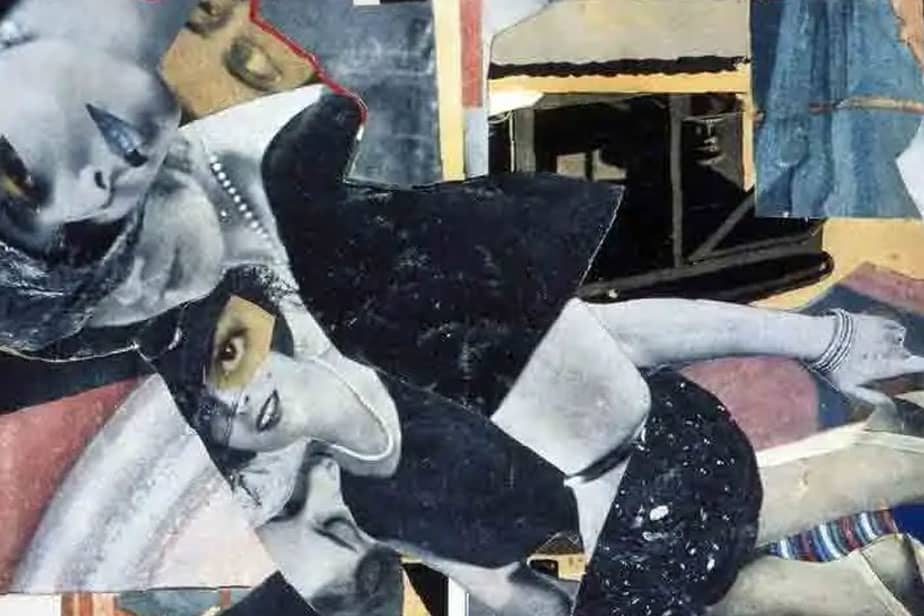 Dada was an art movement that happened between roughly 1916 and 1922.  As a perfect summation of Dada, “Why can’t a tree be called Pluplusch?”, Hugo Ball exclaimed.

Dadaists, Tzara has argued, were “against DADA”. As a rule, “I’m opposed to manifestos, just as I’m opposed to principles.” Tzara and Hugo Ball headed a small group of poets and artists who congregated at a Zurich nightclub named the Cabaret Voltaire in February of 1916. Over the course of a few weeks, they put on a series of wild performances and as this entire generation of young men was being fed up with the status quo of that era. Nihilistic jokes would soon turn into principles that would alter the trajectory of art history for the rest of the 20th century and beyond. We’ve compiled a selection of the best books to learn how that happened.

Now, in modern times many other bohemian rebels seek liberation from prevailing social, artistic, and governmental standards and are joining the original group of Dada expats. Dada thought that ridicule alone would be enough to overthrow totalitarianism, but was wrong, as its international underground movement was displaced by André Breton’s more strategically organized Surrealist movement in just eight years.

If art and liberation movements aspire to become effective forms of resistance, they need to do their study and stock up on a wide variety of tools. If two science fiction novels and a full artist biography seem improbable to mentally prepare creative cultures for drastic social change, never underestimate the power of a wide historical viewpoint. Dada began out of an idea and a World War, but in its own way became a major contribution to surrealism in Berlin, New York, and Paris with illustrations, poetry books and paintings.

Culture and literature words alone may not be weapons, but their influence and critic are an alchemy form unable to be stopped and harvested.. Enough to bring change to the world at large. If this is of interest to you, it makes you doubt and want to march for your rights and country, then read on to find books about Dada that will surely inspire you.

Quality and Price of Books on Dada 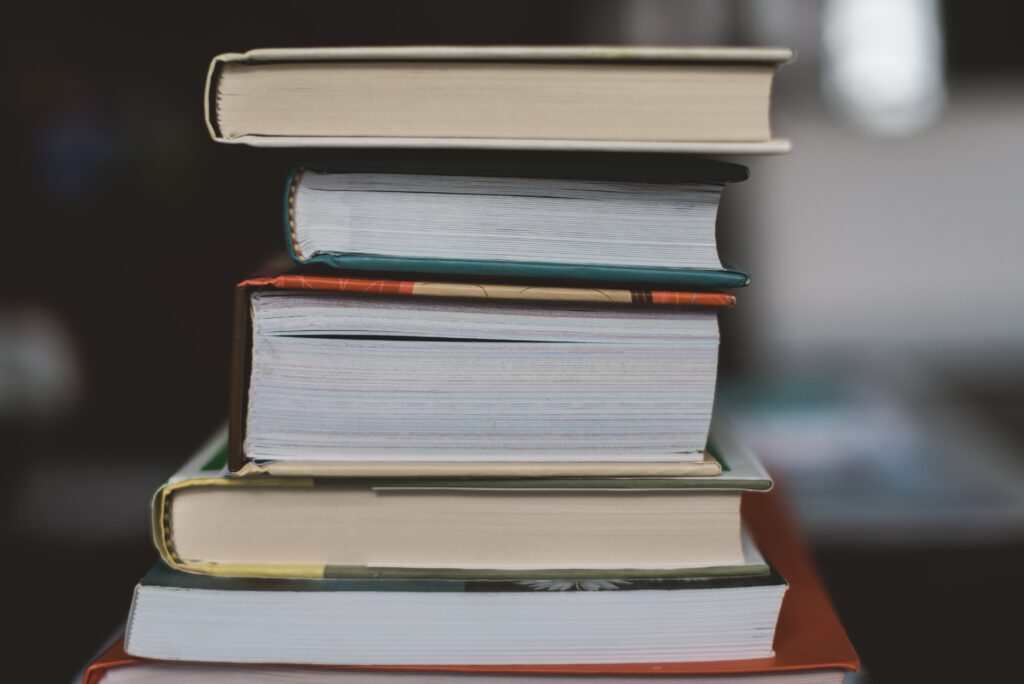 When choosing a book about Dada and viewing our overall quality rating, please keep in mind that our major factors for determining their quality were a combination of their range of information on the topic based on their category, how well written and easy to understand they were, and the illustrations included in the book. Price grading reflects this process and all of the benefits the items provide to the art community as a whole; we react to it in comparison. 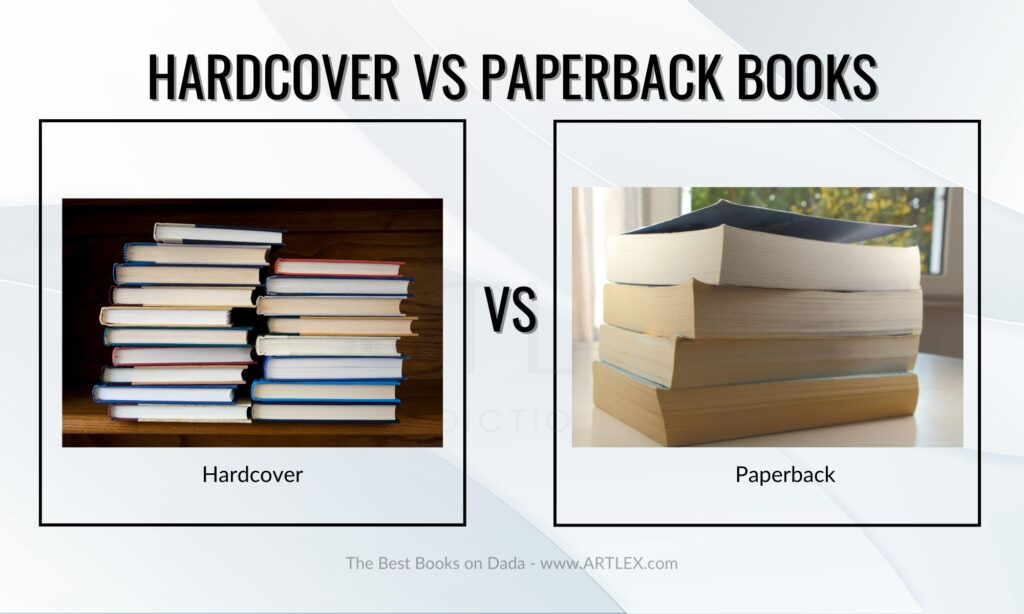 Books come in all shapes and sizes, as hardcopy in your hands or digital form ready to download off the internet. Essentially it is a matter of preference and habit. Yet, some hardcore readers (such as us) tend to look deeper into this distinction.

Unlike a hardcover, a paperback may be folded up and shoved into the corner of a bag for easy transportation. However, a hardback is the more sturdy and elegant choice. They’re significantly more durable than paperbacks, and because of their aesthetics and rarity, they’re also worth a lot more money in the long run if you plan on starting a collection.

Overall, we feel, if you are going to invest in a book that you plan on keeping for a while and possibly hand down to your children, it is a good idea to splurge on a hardcover.

Our Recommendations for the Best Books on Dada 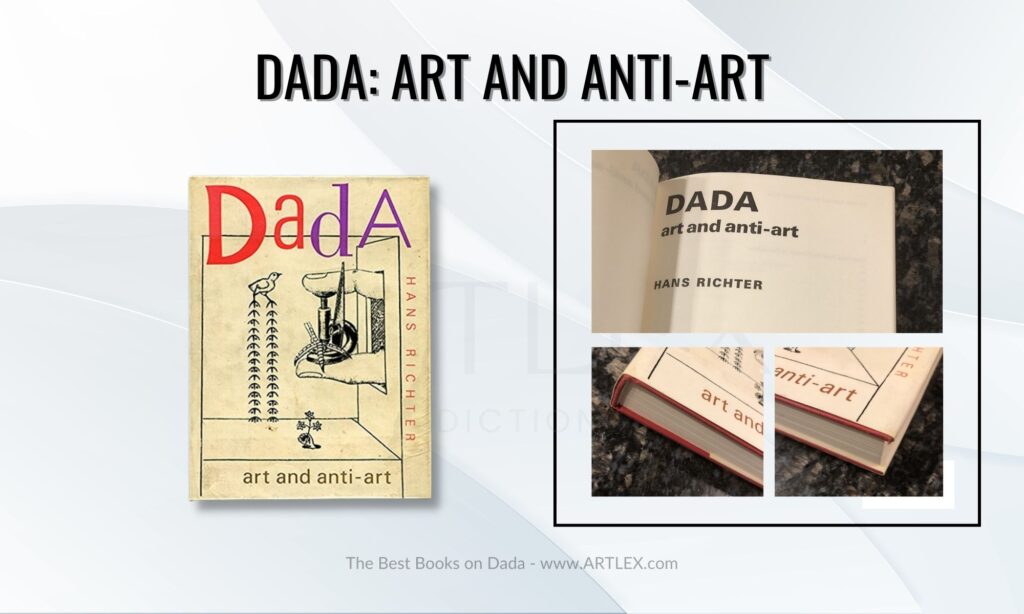 About Dada: Art and Anti-Art

Dada: Art and Anti-Art, by German artist Hans Richter, was first published in 1964 and presents a colorful first-hand introduction to the movement by one of its major practitioners. As a painter and writer, in the book, Richter chronicles the rise and fall of Dada in Zurich, Switzerland, from its beginnings in 1916 until it was replaced by Surrealism in the following decade. Among Richter’s recollections of Dada’s different forms are Hugo Ball, Tristan Tzar, Francis Picabia, Jean Arp, Kurt Schwitters, Raoul Hausmann, Marcel Duchamp, Max Ernst, and Man Ray, to name a few.

Richter focuses on the work and interactions of these essential characters. Documents and images by other Dadaists make Richter’s account bolstered by this book a fundamental source on this intriguing era in modern art history. 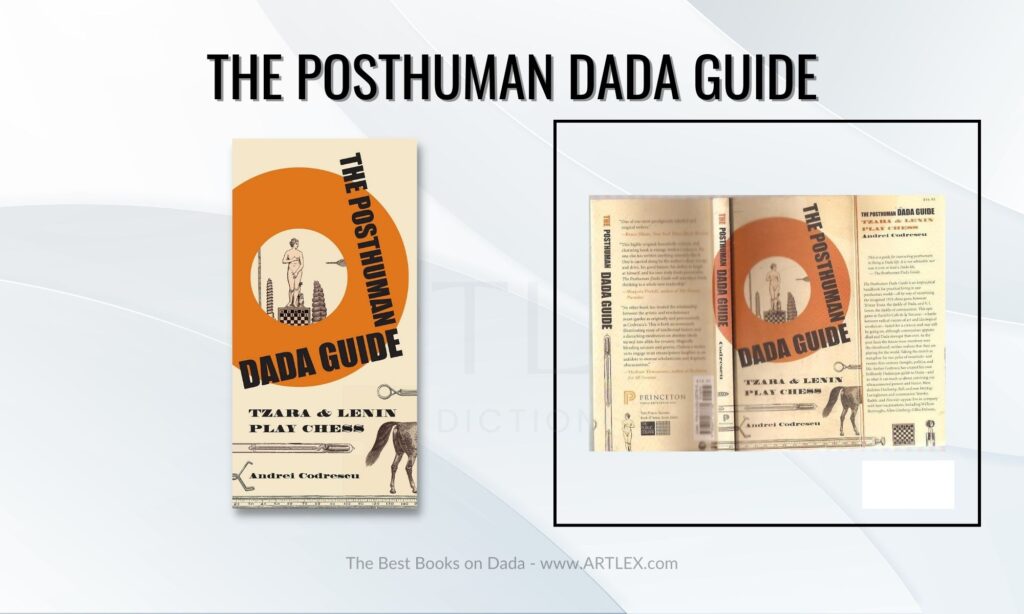 About The Posthuman Dada Guide: Tzara and Lenin Play Chess

Posthuman Dada Guide is a how-to book on practical living in our posthuman society, all by way of analyzing an imagined 1916 chess game between Tristan Tzara, the father of Dada, and Vladimir Ilyich Lenin. There has been an epic game going on in Zurich’s Café de la Terrasse for more than 100 years, even if communism looks to have died and Dada is stronger than ever. Both the poet and the communist aren’t aware that they’re playing for the entire globe as they face off on a chessboard.

This Dadaesque guide by Andrei Codrescu is based on the match as a metaphor for the two poles of twentieth and twenty-first century ideas, politics, and existence, and what it may teach us about surviving our ultra connected present and future. They feature contemporary artists such as Gilles Deleuze and Newt Gingrich, as well as Dadaists like Duchamp and von Freytag-Loringhoven. 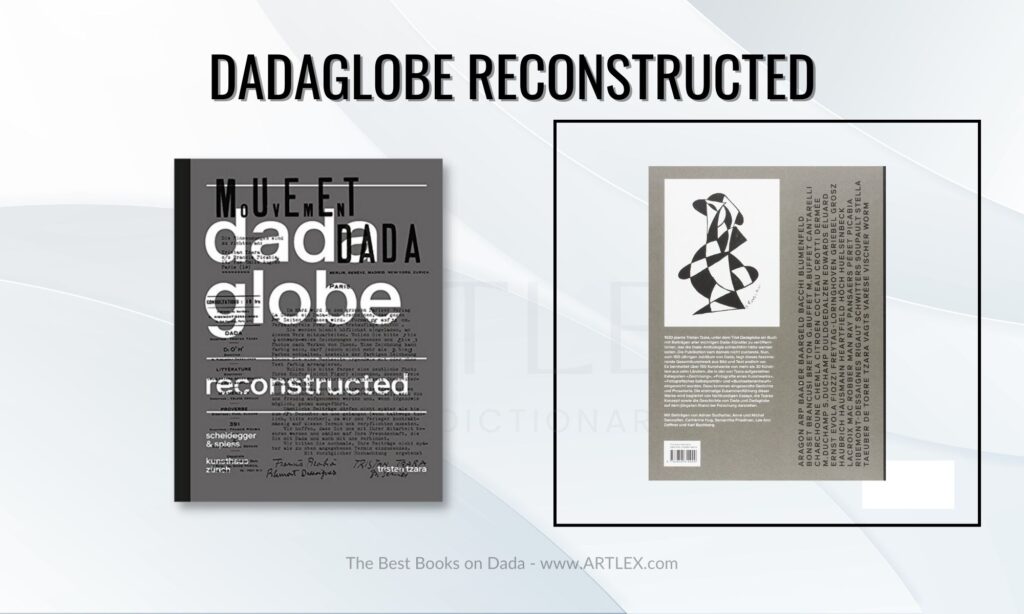 Originally slated to be the definitive collection of works by Dada artists, Dadaglobe has fallen short of expectations. The original version would have included almost a hundred pieces of art by more than thirty artists from seven nations, demonstrating the genuinely global reach of Dada’s aesthetic and literary movement if it had been published in 1921 as intended. As a result of an absence in the literature on this early twentieth-century movement due to lack of funding, it remained unpublished.

However, on the 100th anniversary of the movement, this historical work of art is now presented to the audience. Father of Dada, Tristan Tzara’s work is commemorated at Dadaglobe Reconstructed.  Here, for the first time, the collection is shown in full color and accompanied by essays on Tzara’s concept and the history of Dadaglobe. 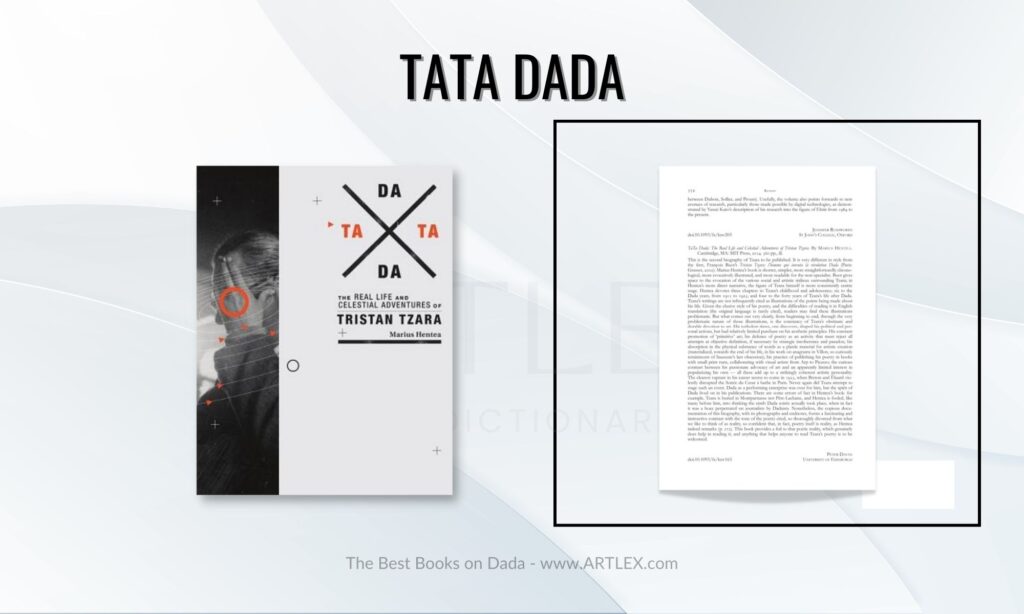 About TaTa Dada: The Real Life and Celestial Adventures of Tristan Tzara

One of the most influential figures in the avant-garde movements of the twentieth century, Tristan Tzara was born Samuel Rosenstock (or Samueli Rosenstok) on April 1896 in a small Romanian town. Little did he know that a handful of years later, at the Cabaret Voltaire, in Zurich, Tzara would become the father of Dada with a series of frantic performances involving multilingual (and non lingual) yelling, music, drumming, and calisthenics that would go on to be known as the Dada Cabaret Voltaire. It wasn’t long until Tzara’s movement, Dada, became an international art movement that drew young artists from Paris, New York and other cities throughout the globe.

If you are looking for a biography of the father of Dadaism, Marius Hentea’s TaTa Dada is the first one written in the English language, however some typos in the book may distract you while you are deep in thought. 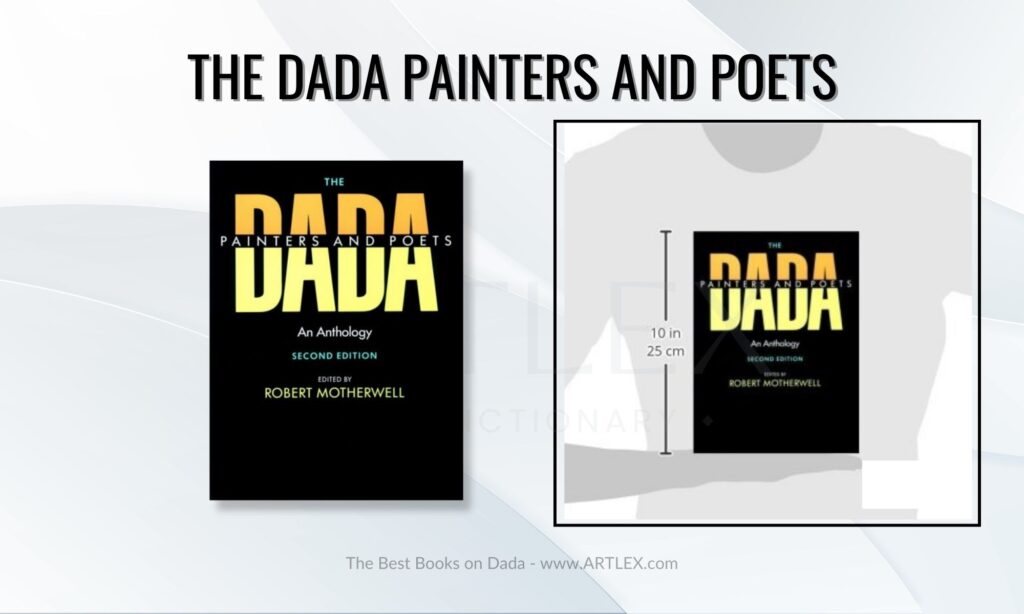 About The Dada Painters and Poets: An Anthology

Robert Motherwell, an Abstract Expressionist painter from the postwar New York School, is best known for his enormous “Elegy to the Spanish Republic” series. On top of this, as a writer he created “The Dada Painters and Poets” book on the subject in 1951, when the movement’s popularity was still regarded as a sideshow to Cubism and Surrealism. Dada pioneers Marcel Duchamp, Jean Arp, and Max Ernst were still in their prime at the time and worked with Motherwell on obtaining information for this groundbreaking study.

Dada’s most important participants—poets and artists alike—are featured in the book, which is a main source compendium of essays, manifestos and pictures. It’s hard to overstate the importance of Motherwell’s book in discovering Dada’s art-historical relevance. 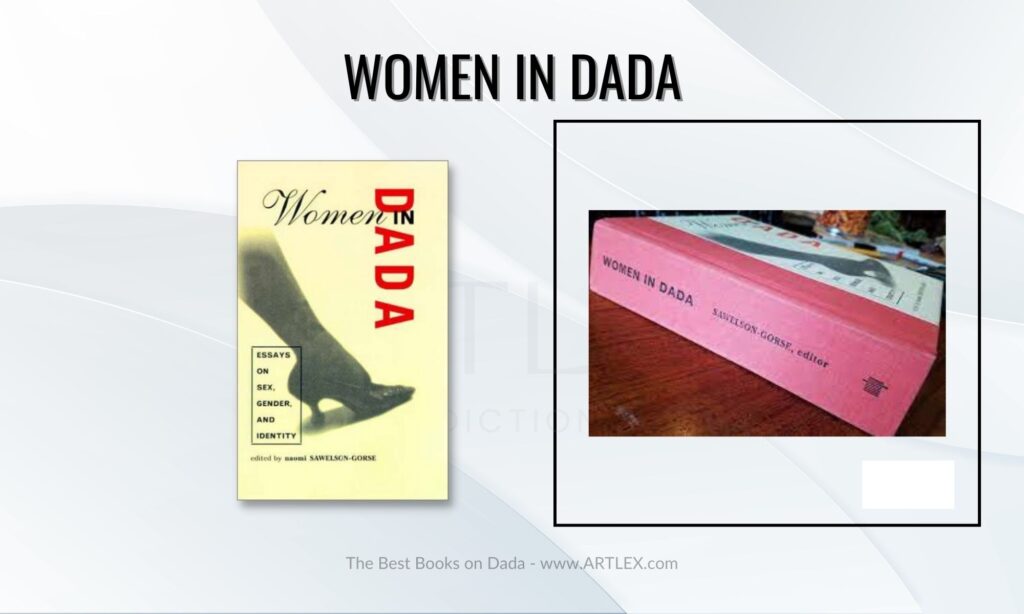 About Women in Dada: Essays on Sex, Gender, and Identity

Despite its iconoclasm, the Dada movement had its share of repression and misogynistic inclinations. Even the word Dada conjures the male figure—father and authority alike—and that’s exactly what it does.

Until now, no one has attempted to argue that Dada was directly influenced by the shifting roles of women in European and American society. Dadaism was born out of many different factors, including debates about birth control and suffrage, dwindling male populations, an increasing female workforce, and the rise of Freudianism.

If you are interested in the feministic aspect of Dadaism, and the role of women in this movement, this book is a great one to have in your library.

“For me taking part in the decay of present-day man is an entertaining task and the only one that interests me.”

If you are interested in entering the world of Dada, please do so at your own risk. If this statement didn’t scare you, then please check our list of book recommendations that will most certainly help you waltz down the rabbit hole. It sure is a fun ride!

Dadaglobe Reconstructed, based on years of research by American researcher Adrian Sudhalter, offers a fascinating look at Dada, including a plethora of previously released material. Anyone interested in the first really global avant-garde movement should read this book. It is both essential and fascinating.

Female dadaists such as German émigré Baroness Elsa von Freytag-Loringhoven, Berlin dadaist Hannah Höch, French dadaists Juliette Roche and Suzanne Duchamp, Zurich dadaists Sophie Taeuber and Emmy Hennings, exiled poet and artist Mina Loy, Clara Tice, the “Queen of Greenwich Village,” and Beatrice Wood, who died in 1998 at age 105, are all discussed in this Colonialist racism, cross-dressing and dashing, as well as machine gendering are all addressed in the book Women in Dada: Essays on Sex, Gender, and Identity.

We hope you found our analysis of the top books on dada of 2022 to be helpful. Consult our associated guides for further sources of comparable items for the artistic lifestyle.