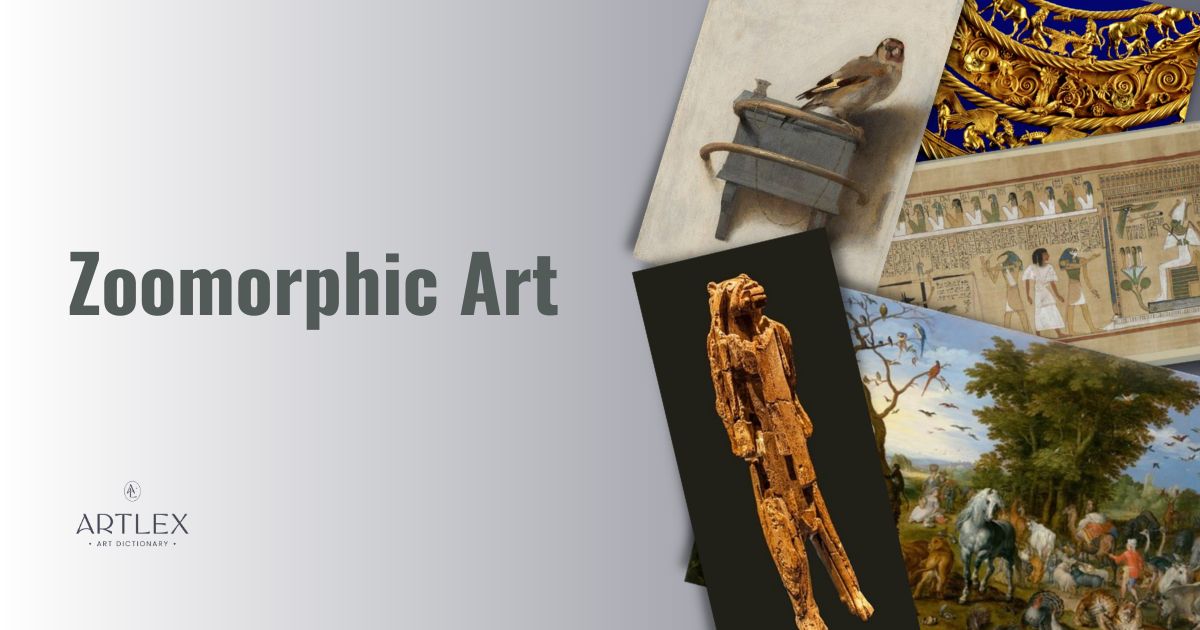 In this nomadic age, humans hunted for birds, bison, elk, deer, and mammoth. These animal forms were part of Stone Age art.

The oldest zoomorphic figure on record is Lion-man, an ivory work found in the German caves of Swabian Jura. The 35,000-year-old artwork is now in the Museum Ulm, in Ulm, Germany. Lion-man has the head of a lion and the body of a man.

Archeologists from the Department of Prehistory at the German University of Tubingen discovered the first carving to resemble a mammoth, while in Hohlenstein mountain region, in 2006. The work now called Vogelherd Mammoth is made from ivory and dates to 33,000 BCE.

With new technology, archeologists have determined that the zoomorphic paintings on the ceiling of Spain’s Altamira Caves are more than 34, 000 years old.

In the Last Judgment of Hu-Nefer from The Book of the Dead, dating back to the New Kingdom, 1275 BCE, animal forms play a religious role in the narrative scroll. Hu-Nefer holds the hand of the god Anubis, with the head of a jackal, associated with the afterlife and mummification.

To the right is the fierce Ammit, depicted as a goddess with the body of a lion, the hind legs of a hippopotamus and the face of a crocodile, stands ready to devour those deemed unworthy.

On the other side is Toth, the Egyptian god of writing and wisdom, with the head of an ibis, who records the name of whoever enters.  The god Horus, with the head of a falcon stands ready to present the man to Osiris, the god of the underworld, who sits on the throne.

Cats were considered demi-deities to the ancient Egyptians and were believed to be descendants of the goddess Bastet (Bast) who brought good health and protection.

The Bronze figure of Bastet represents the goddess in a long gown, depicted with four kittens at her feet. The eyes have gold inlay. The ears of Bastet have piercings, so this statue would have had earrings. Bronze statues such as these were made to be donated to temples.

The ancient Scythian people were originally from Iran, and as a nomadic group gradually relocated to southern Russia and Ukraine between the 7th and 8th centuries BCE. Powerful warriors, they were known for their wealth, through trading with the ancient Greeks. Money was used to purchased gold made into zoomorphic inspired jewelry, decorative objects, and ornaments, as well as battle weaponry.

The Golden Scythian below is a pectoral or necklace. It shows horses being torn apart by griffins on the lower tier.

Animal forms in Early European art were used as symbols or to tell full narratives. Artist used animal forms in scenes of battle, hunting and sport. In Christian art birds were thought to represent the soul, while peacocks were a sign of everlasting life due to the belief that their flesh never decayed

In the Medieval Period, birds, and serpents were common creatures in art. Eagles were considered the highest form in the bird kingdom. Dogs symbolized loyalty and lions were a symbol of royalty. Mystical creatures were also part of zoomorphic art including unicorns, dragons, and griffins.

The Hiberno-Saxon people (the former from Ireland and latter German) settled as a community in Great Britain, where the monastic culture at the time encouraged works of art such as the Lindisfarne Gospels. The Early Medieval illuminated manuscript, from 700 CE contains texts and images many of which are zoomorphic.

Thick with the shape of snakes, in animal style, the Lindisfarne Gospel uses horror vacui. Translated from Greek this means “fear of empty space”. Every space is filled, and the zoomorphic images make use of interlacing through the form of complicated twits and knots, the best example of which is Mathew’s carpet page.

A gold belt buckle from the Sutton Hoo Ship Burial, the largest archaeological dig in British history, is rich with zoomorphic pattern. Dating back to the 7th century Anglo-Saxon community the buckle includes an interlacing shape of snakes, using horror vacui, as well as birds of prey depicted on attack, in animal style.

Animal forms help to carry a narrative. Piero di Cosimo (1462-1522) painted The Forest Fire based on a poem by Roman philosopher Lecretius. Tree trunks explode and branches burn as creatures both wild and domestic run to escape. A deer and a pig have the heads of satyrs.

The Entry of Animals into Noah’s Ark was painted by Flemish artist Jan Brueghel the Elder (1568-1625) in 1613, illustrates a scene from the bible. As court painter to Archduke Albert and Infanta Isabella, who ruled what is Belgium today, he had access to their vast collection of rare animals and birds from which he composed studies.

It was said that a small goldfinch flew over Jesus while attached to the cross and pulled a thorn from his head. St. John the Baptist shows a goldfinch to Jesus as if foreshadowing his future in Raphael’s (1483–1520) High Renaissance painting Madonna of the Goldfinch (1505-1505).

Dutch painter Carel Fabritius (1622-1654) is best known for his masterpiece, The Goldfinch (1654), a Baroque oil on canvass painting, capturing the minute details of a bird ready to take flight.

The opposition of human and animal depiction, or aniconism, in religious art and architecture did not extend to secular artwork in the Muslim world.  Here, Islamic art used animal based figural designs in miniature paintings, decorative arts, textiles, and architecture.

The poem Language of the Birds (Mantiq al-tair) written by twelfth century Iranian poet Farid al-Din ‘Attar (1142–1220 CE) was the inspiration for this illustration, The Concourse of the Birds, on the folio of this sixteenth century Timurid miniature.  The folio which shares the same name as the poem was painted by Iranian artist Habiballah of Sava (1590-1610 CE), in 1600 CE, Language of the Birds uses ink, opaque watercolor, gold and silver on paper. 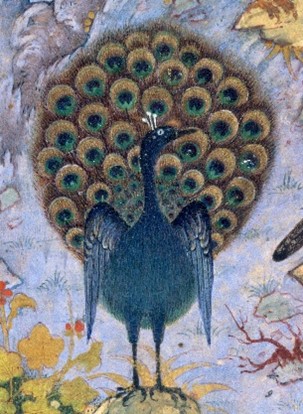 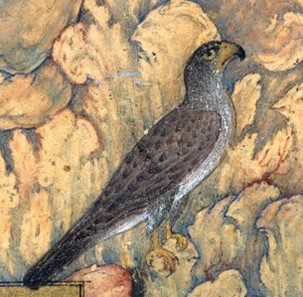 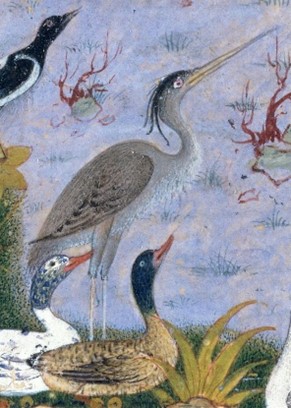 In this Islamic art zoomorphic painting, each bird represents one soul. All are in search of “simurgh” a mystical bird for spiritual unity. Birds along the banks of the river include herons, swans, ducks, doves, a hawk and even a peacock with plumage fully extended. In the distance in the mountains are two goats with stylized horns. Off to the right is a hunter with an elongated musket.

American Artist Jeff Koons used the image shape of a dog, in his mirror finish stainless-steel works, with a transparent coating of paint. These works of zoomorphic art were created in a series called Balloon Dog (1994-2000), in orange, blue, magenta, red and yellow.

Pisupo Lua Afe (Corned Beef 2000) by New Zealand born artists Michael Tuffery, is a mixed media work, created in 1994. He used cans from corned beef, which were flattened to create a life-sized bull.