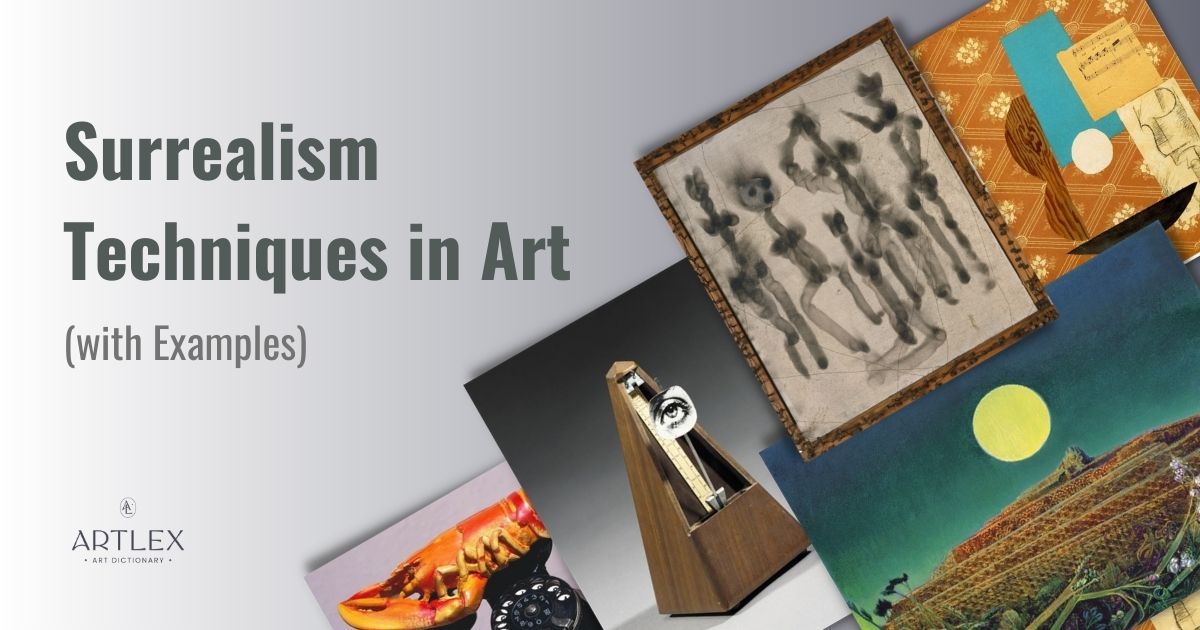 Surrealism is defined by an attitude of experimentation, spontaneity, and openness to possibilities and unexpected outcomes. The Surrealist artists utilized and invented a variety of techniques to explore a free-flowing creative process free from conscious decision-making and the rational mind. They produced an array of work and explored a range of processes, techniques, and mediums such as automatic drawing and writing, collage, frottage, grattage, assemblages of objects, and invented interactive games such as the Exquisite Corpse. Their intention was to explore their creative potential free from conscious thought; they believed that this way could produce more potent work that revealed the human psyche.

One of the most popular techniques used by Surrealists was that of automatism. Automatism in art is a group of creative techniques to generate images from the unconscious mind during the creative process, without intervention from the conscious mind. Automatism is a term borrowed from physiology that refers to automatic and involuntary behaviors and actions that are unconscious, such as breathing, motor skills, nervous tics, sleepwalking, and many other. Surrealists adopted this in part from the psychoanalytic techniques of free association employed by Freud which revealed the patients’ unconscious thoughts through unrestrained monologues, and in part from the spirit writing of mediums, who were thought to channel messages from the deceased.

Surrealists believed that the unconscious was a more powerful source of creativity than anything produced by the conscious mind and would use automatism in drawing, painting, writing, and speaking. They also developed and explored a variety of other techniques of automatism, such as the surrealist collage, frottage, and grattage. Many of these techniques were for the most part a contribution by the experimental artist Max Ernst.

Automatic writing and drawing was a very popular method used by many artists such as André Breton, André Masson, Joan Miró, Salvador Dali, and many others.

Automatic writing is defined as writing so rapidly that rational and preconceived notions are not given any time to impose control on the content. In 1920, André Breton, the leader of the Surrealist movement, and Philippe Soupault published the book Les Champs Magnétiques, the first and most famous example of automatic writing of literary Surrealism:

Automatic Drawing or Doodling is a drawing composed of a continuous line that is drawn on a surface without specific intention and a preconceived concept. Surrealists would then use their conscious mind to recognize forms in the abstract drawing, and link them to recognizable forms and themes. The automatic drawing method was also applied to painting and other media.  Examples of automatic drawing below:

Collage, which is derived from the French word “to glue”, refers to the process of creating a work of art by sticking various materials to a surface, such as scraps of paper, fabric, newspaper clippings, photographs, text, and even found objects. The Cubist artists Georges Braque and Pablo Picasso were the first to coin the term “collage”, but it was a key technique used by the Surrealists for its ability to transform reality in unexpected and yet recognizable ways. Surrealist collage proposed a more poetic visual approach with dream associations, in contrast to Cubist which focused on other explorations, such as deconstructing form and experimentation with abstraction, and Dada collage which focused more on political photomontages.

For Surrealists collage was an incredibly effective and experimental technique to create shocking juxtapositions and combine pre-existing elements to produce new realities. Surrealist artists such as Max Ernst, André Breton, and Joan Miro have explored this technique and produced bizarre and intriguing work. Max Ernst in particular, employed this technique in ingenious ways and is known for his invention of the collage-novels in 1929, where he employed late-19th-century prints by cutting and reorganizing them together to create new images.

Frottage is a French word that translates ‘rubbing’ and it involves the creative process of rubbing onto a sheet of paper on top of a textured surface by using a pencil, chalk, crayon, or other drawing material. It was a method developed by Max Ernst around 1926 when he was trying to adjust the rickety wooden floorboard at an inn where he was staying in Brittany. He was inspired by the grains of the wood board and experimented by laying paper on top and rubbing on with a pencil. He then went on to develop this technique even further, by capturing a variety of textures, such as textiles, leaves, bark, and later applied the technique to oil painting and gave it the name “grattage”.

Ernst described the process of creating imaginary worlds through this technique in the following manner:

“When I intensely stared at the drawing won in this manner, at the ‘dark spots, and others of a delicate, light, semi-darkness,’ I was by the sudden augmentation of my visionary facilities with contrasting and superimposed pictures.”

Apart from Ernst, other Surrealist painters such as Henri Michaux, Andre Bréton, and Ronald Penrose all used the frottage method.

Grattage is derived from the French word which means ‘scraping’ and was invented by surrealist artist Max Ernst as an extension of the frottage technique. It involves applying a thick layer of paint on a canvas or other flat surface placed on top of a textured object and then scraping the paint off with a spatula to create unexpected effects of textures, marks, and shapes. Ernst would use relief-like objects to produce patterns and textures on his canvas surface, which he would then rework with paint and transform them into fascinating surreal landscapes of mysterious forests and imaginary cities.

Decalcomania is a decorative transfer method that was invented in 18th-century England and used to decorate ceramics and other materials by transferring engravings and prints. The Surrealists adopted it and made it popular as a means of generating chance imagery without conscious control. This transfer technique involves applying and spreading ink or paint onto a surface, covering it while it’s still wet with something like paper, glass, or another material, and then removing it to reveal a pattern and paint stains that can be further enhanced. The surrealist artists Oscar Dominguez and Max Ernst are often associated with it since they used the technique to create imaginary landscapes from the resulting patterns and textures.

The most popular decalcomania technique used today is known as a “butterfly print,” which is frequently used by school kids where they paint on a piece of paper, fold and press it to get a mirror pattern when they unfold it.

The technique of fumage was invented by the Austrian painter Wolfgang Paalen in 1937. This technique involves the use of candle smoke to produce distinctive patterns and impressions on the surface of a piece of paper. Fumages are distinguished by ethereal, nebulous forms and mysterious patterns that evoke dreams and apparitions. Paale also applied this technique in oil painting.

Surrealists were fascinated by the idea that some objects had mystical properties, and began experimenting with the assemblages in bizarre juxtapositions that evoked the subconscious mind and defied reason. They would use the “found object” or “objet trouvé” in French, to create startling arrangements. Found object is a term that refers to art that utilizes and modifies everyday objects, (natural or man-made), to repurpose them into art while keeping them in a recognizable form.

The unexpected juxtaposition of seemingly unrelatable objects is also a characteristic of the Dada movement. Marcel Duchamp, an artist whose work is associated with Cubism, Dada, and conceptual art, was the first artist who broke down the boundaries between works of art and everyday objects, by creating his provocative ready-mades, where he appropriated mass-produced objects and elevated them to the status of art. He was one of the most respected members of the Surrealist circle and the Surrealists were inspired by his approach and began creating their  “surrealist objects”. Unlike him though, they intended that the new object would evoke symbolic connotations and an emotional response.  Additionally, some artists such as Salvador Dali embraced Sigmund Freud’s psychoanalytic theories which hypothesized that objects might function as projections of repressed sexual impulses.

Many Surrealists artists such as Salvador Dali, Andre Breton, Man Ray, Meret Oppenheim, Oscar Dominguez, and Alberto Giacometti, have experimented with this technique.

The surrealist movement invented collaborative games for recreation and investigation. The intention was to eliminate the interference of the rational mind as much as possible, and allow concepts to flow more freely and uninhibited. Exquisite corpse (Cadavre Exquis) is the most well-known of the surrealist group games and is a collaborative process involving a group of people who compose poems or drawings. It was devised by André Breton, Yves Tanguy, Jacques Prévert, and Marcel Duchamp, in 1925 in Paris and was first conceived as a word game. Each player wrote a word or phrase on a piece of paper, folded the paper to hide it, and then passed it to the next player to add his piece. This led to nonsensical phrases like “The exquisite corpse will drink the new wine” (“Le cadaver exquis boira le vin nouveau”), which is how the game got its name.

This process was then applied for drawing as well, where each participant would draw something, fold the paper to conceal the drawing, and then pass it to the following player to add his drawing. The results of this process would produce surprising juxtapositions, and fantastic, humorous creatures. Exquisite Corpse was the ideal game for the Surrealists, as it promoted chance and unpredictability, and co-creation at its best. Even to this day, this game is played with enthusiasm by young and old alike.

Max Ernst began developing the oscillation technique around 1942, after arriving in New York to escape WW2. Oscillation is a drip technique that involves tying a can of paint with a hole in the bottom to a piece of string and swinging it back and forth like a pendulum above a canvas. This results in configurations of lines and drops that resemble ellipses and planet orbits; Ernst would then experiment with free associations and rework on top of them.

Ernst’s sudden engagement with this technique may have at least two interpretations. He was fascinated by astronomy and mathematics,  and perhaps he had seen the compound pendulum exhibited in physics seminars at the University of Bonnhe, or he became aware of other artists using this device.