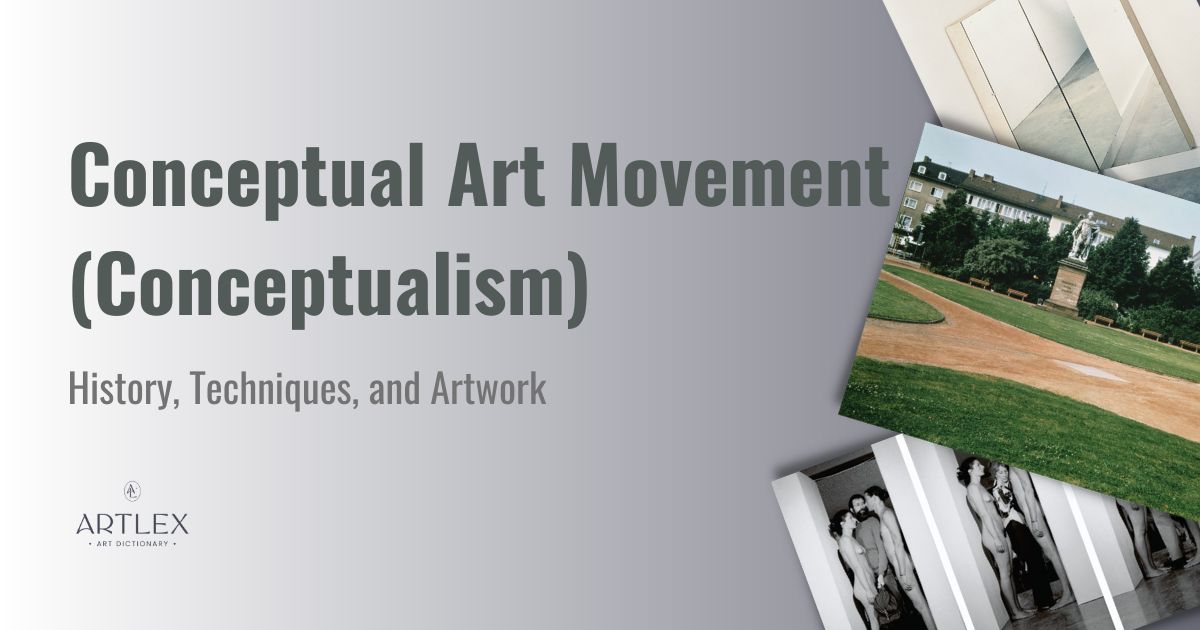 What is Conceptual Art?

The term Conceptual Art (also Conceptualism) refers to art practices where the emphasis on the concept of the work prevails over other formal or visual instances of art-making. The materials and techniques are secondary to the artwork’s idea. Andrew Wilson, Senior Curator of Modern & Contemporary British Art at Tate, clarified how Conceptual Art is not a cohesive art movement or style, but a set of strategies. Conceptual artists conceive art as an idea, not as the creation of a completed, concrete, art object.

Concept Art thus encompasses various practices, many artists, and conceptual form: site-specific installations, performances, writings, happenings, ephemeral objects, and more. However, the term conceptual art traditionally refers in art history to the tendency that emerged between the mid-1960s and mid-1970s. During that period, many artists explored the vision of a new kind of art and a new role for the artist: no longer a producer of objects, but a creator of ideas, that may be already a work of art. Their works rejected the tools of traditional art, problematizing the idea of what can and cannot be art. In this art context, many conceptual artists also critiqued the production, distribution, exhibition, and promotion structure of the art system.

Conceptual Art is not an artistic tradition or a coordinated movement, but it carries forward critical and ontological instances that had already been highlighted by 20th Century Avant-Garde movements, in particular Dadaism. Conceptualism also represents an important aspect of contemporary arts, although it is not to be confused with all artistic practices that reject traditional media such as painting and sculpture or that put the artist’s intentionality at the center of the creative process.

History of the Term “Conceptual Art”

The practices gathered under the term conceptual art were initially designated with different definitions such as idea art, information art. The origin of the term conceptual art is found in a text of 1961 by Henry Flint, Essay: Concept Art, where the artist and philosopher of the Fluxus group described his performances and artistic experience as conceptual work.

The term became even more popular thanks to the theoretical texts of the American artist Sol LeWitt Paragraphs on Conceptual Art (1967), published in the specialized magazine Artforum. LeWitt focused on the creative process: conceptual artist decisions made before the actual creation of the art object are the most important aspect, where the execution is a perfunctory affair. Finally, the expression conceptual art appeared in four important exhibitions during 1969 (see the paragraph History of Conceptual Art) and in the essay by Lucy Lippard Six Years: the dematerialization of the art object from 1966 to 1972, where the American art historian precisely describes the conceptual art movement of the period.

Precursors of Art as Idea

Conceptual Art is arbitrarily placed in the period of the 1960s and 1970s. However, there are earlier artists out of these two decades who were forerunners of the concept art trend. Marcel Duchamp was not a conceptual art artist by definition but his readymades, where everyday objects obtained the status of work of art and became subjects of aesthetic experience, are prototypes of a conceptual form. His Fountain (1917) can be considered one of the first conceptual artwork.

The artistic research of the Surrealist artist René Magritte, who at the end of the 1920s focused on the disconnection between images and words, verbal and iconic representation, is also very close to the art language of conceptual art and the British conceptual artists’ group Art&Language.

Another precursor of Conceptual Art is Robert Rauschenberg, who produced in the 1950s the work Erased De Kooning Drawing. The American artist bought a drawing by the celebrated artist De Kooning and decided to erase it; the gesture opens questions on the very nature of the work of art and the origin of the creative act, but also the artist’s social role. In 1962, also the artist Barrie Bates erased his original identity as an artist signing himself as Billy Apple, this idea explores the tendency of artworks fabricated by third parties and questions the role of the original artist’s work in creating complex objects.

Finally, early conceptual art trends include the Italian artist Piero Manzoni, who in 1961 exhibited his Merda d’artista (Artist’s Shit), a vase presumably containing his own feces, and the French artist Yves Klein, who offered Immaterial Pictorial Sensitivity, invisible spaces certified by him in exchange for gold leaf by the purchasers.

Numerous artists explored the critical and immaterial dimensions of conceptual art in the20th century, but conceptual art artists by definition theorized themselves in the second half of the 1960s, with Sol LeWitt seminal text Paragraphs on Conceptual Art. Conceptual art emerged with Joseph Kosuth’s artist series Titled (Art as Idea as Idea) in 1966-1967 and parallelly with Air Show Air/Conditioning exhibition by the British artist s Terry Atkinson and Michael Baldwin (Art&Language group).

In 1968, also the American artist John Baldessari exhibited his word paintings in Los Angeles, and in 1969 the art dealer Seth Siegelaub organized in New York the exhibition January 1-31: o Objects, o Painters, o Sculptors, opening in public spaces the new art movement in which the materials of art are themselves concepts. This represents a shift in art history because it affects not only the form and subject of work of art and art making but its very structure, too.

Conceptual Art was an uncoordinated art movement, but which acted at the international level, involving Europe, North America, and South America. The reasons for this diffusion can be found in the common artists’ intolerance to the commercialization of the art market, more and more focused on mechanisms of production of objects rather than valuable work of art. Artists reacted by refusing to create new traditional objects, paintings, or sculptures, and therefore began to sell ideas, not easily sold in conventional spaces such as art galleries and auctions. Various conceptual artworks and performances also critique society, government policies, marketability of art.

Among the reasons for Conceptual Art, there are critical and socio-political urges, but also aesthetic ones. Conceptual artists reacted against the prevailing formalism of the Abstract Expressionism artists and led by the American critic Clement Greenberg. Conceptual artists refused to focus on colors, lines, techniques, and the strictly physical form and nature of the medium.

The conceptual Art movement is associated with the 1960s and 1970s conceptual art artists, but it has continued to be present in the artistic production of many subsequent artists. Even in the 21st century, artists that do not define themselves as conceptual, are rewriting Conceptual Art. The legacy can be seen in the tendencies toward a socio-political critique of work of art, in the use of ideas, information as media to define art, or in art language like Installation Art, Performance art, Earth Art, or Digital and Video Art.

Conceptual Art has the characteristic of being able to be created through different creative processes and take on very different forms.

Among the most frequent conceptual techniques, we find performance, therefore whose artistic work is documented only through photographs, texts, videos of the event or action. Among the most famous performances, we remember Imponderabilia, by Marina Abramovic and her partner Ulay, who at the end of the 1960s performed one in front of the other naked at the entrance of a museum. The action reflected on the reactions and postures of visitors at the entrance, on the use of the public, and the role of the museum.

Another common technique, particularly in first conceptual artwork, is the research into language and the use of written texts and displayed objects. This is particularly evident in the practice of Art&Language group (Lawrence Wiener, Edward Ruscha, Joseph Kosuth, Robert Barry) who worked exclusively with linguistic tools and visual elements. This trend, according to the British philosopher Peter Osborne, could be influenced by the impact of Anglo-American analytic and structuralist philosophical theories. Written textual elements are also a medium widely used by the American John Baldessari.

Conceptual Art also takes on forms of criticism of the museum institution and its structural setting, redefining the relationship with the public and its use, but also highlighting the criticality of the artistic system. The artistic practice of conceptual artists such as Hans Haacke or Marcel Broodthaers moves in this direction and is defined under the label of art movement Institutional Critique.

One and Three Chairs by the American conceptual artist Joseph Kosuth (1965) is a seminal work to define and understand Conceptual Art. Kosuth attended the School of Visual Art of New York until 1967 but also studied anthropology and philosophy in the 1970s. This aesthetic-philosophical education, strongly linked to research on language, is reflected in the art forms that the artist creates. Kosuth wrote that ‘the actual works of art are the ideas’. In One and Three Chairs, he juxtaposes three different ways of representing (and signifying) the same object: a chair. The artist presents a physical chair, next to its 1:1 scale photographic reproduction, and the definition of the word “chair” taken from a vocabulary.

In this emblematic work of art, therefore, the material and concrete plane of the physical object and the conceptual one, of visual representation and verbal meaning, coexist. Kosuth’s research in the One and Three series investigates the relationship between image, word, and reality; he reflects on image and language and tautology and short-circuits of meaning, as the surrealist René Magritte had previously done –Treachery of Images, Ceci n’est pas une pipe (1928-1929). The conceptual artwork is also akin to what will be the theoretical research in the philosophy of language of the British art group Art&Language.