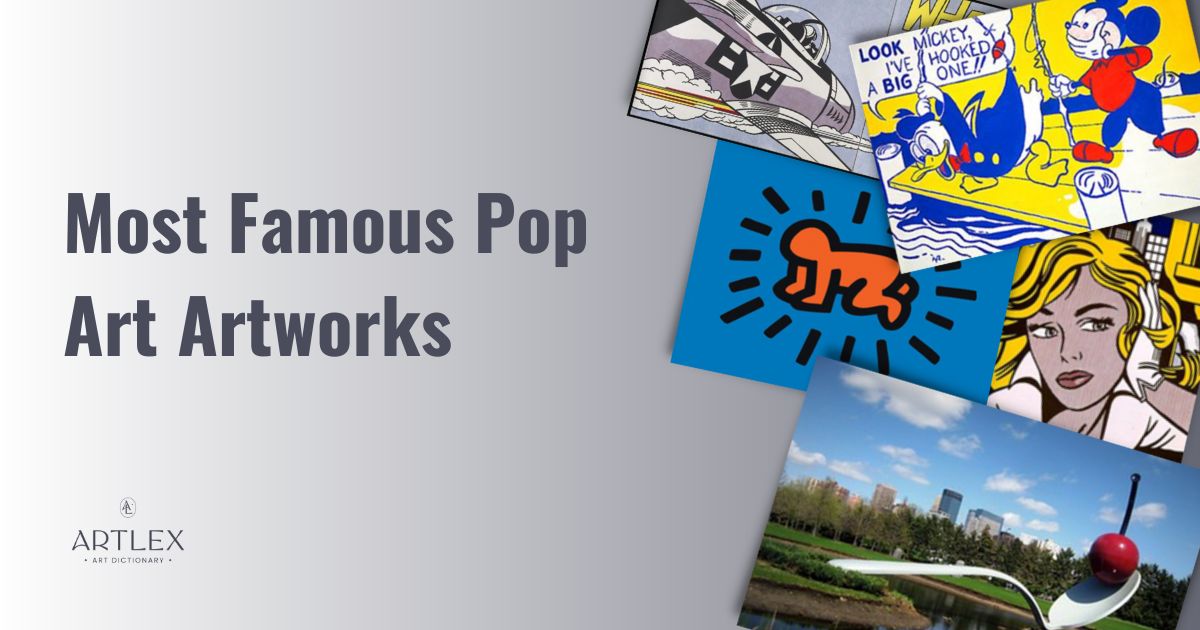 British Pop art from British artists included judgements and perceptions of American consumerism, as Britain struggled to re-establish itself after World War II. American Pop Art portrayed what it was like to live during the era. Everyday items became part of the art Pop artists created from what the public could buy in the supermarket, to new and innovative household appliances.

Pop artists became famous in the art world by combining fine art with pop culture. Pop artists were influenced by the youth culture movement and popular culture at the time. This included rock and roll singers and bands, movies, movie stars, television, and comic books. These images were incorporated into Pop art style.

Examples of famous and notable pop art artwork include:

American Pop art artist Andy Warhol’s (1928-1987) Pop art Campbell’s Soup Cans from 1962, focuses on North America’s favourite soup brand in a can. Television commercials advertised the brand as a homestyle soup, and as a healthy part of a growing child’s nutrition. Happy families were shown consuming it. Warhol said, “I used to drink it. I used to have the same lunch every day, for 20 years, I guess, the same thing over and over again.”

Warhol’s Pop art depicts the 32 flavors of the soup, using synthetic polymer paint on 32 canvases. Initially, when it was first shown to the public, it was displayed on shelves, as it would appear in a grocery aisle.

Crying Girl is the name of two Pop art works by American Pop art artist Roy Lichtenstein (1923-1997). Both are women from comic strips, with yellow, blonde hair, revealed in a full frame close-up crying. The first was painted in 1963, an offset lithograph on wove paper. It was created for a show at Leo Catelli Gallery, in New York. The subject is in distress and looks nervously sideways, while biting her hand.

The second Crying Girl was created in 1964 from porcelain enamel on steel. The inspiration was the Secret Hearts comic strip. Here the woman is dabbing her tears. Without anything else in the scene, it leaves the viewer wondering why these women are crying.

Radiant Baby (1990) Pop art artist Keith Haring’s (1958-1990) work from the Icon Series, illustrates a crawling baby. It is a simple outline that often appeared in different colors. Rays in black radiate outward, as if the child is surrounded by beams of light.

Haring said the infant, that he considered one of his favourite pieces from the series, represented  the purest and most positive experience of human existence. The symbol became part of his artwork he drew in the New York subway.

4. Just what is it that makes today’s homes so different, so appealing? (Richard Hamilton)

Just what is it that makes today’s home so different, so appealing? by English pop Art artist Peter Hamilton (1922-2011) is often called genius in the Pop art world. The collage uses glamorized images from magazines, and newspapers, with references to television and film. It shows the idealized world with all the perks of wealth and consumerism. The man hides his nakedness behind a lollipop, while the woman wears pasties. Both appear as 50s era Adam and Eve.

In this Pop art painting, comprised of oil and magna on canvas, by famous Pop art artist Roy Lichtenstein, a blonde, female comic book character contemplates why an unknown man has not shown up. Her excuse for him is “M-maybe he became ill and couldn’t leave the studio”, enclosed in a thought bubble.

Whaam! by Pop art artist Roy Lichtenstein, illustrates air force battle and carnage on two panels. The thought bubble from one pilot reads I pressed the fire control… and ahead of me rockets blazed through the sky.” The aircraft on the second panel explodes with the word Whaam! This Pop artwork using acrylic paint and oil paint on canvas, simplifies war, in comic book fashion.

Roy Lichtenstein’s Drowning Girl, created with oil and synthetic polymer paint on canvas, finds herself in a perilous situation, but refuses to ask for help from a suitor who has caused her some distress. “I don’t care! I’d rather sink—then call Brad for help!” says the thought bubble.

The original image was drawn by artist Tony Abruzzo, for a comic book entitled Secret Hearts. Lichtenstein used the image in a closely cropped reproduction, which eliminates the backstory. This causes the viewer to wonder how the woman ended up in the deep water. Today, the work hangs at MoMA, in New York.

Pop art artist Roy Lichtenstein’s 1961, oil on canvas Pop art painting entitled Look Mickey was conceived by taking an image from a Walt Disney children’s book entitled, Donald Duck: Lost and Found. The mouse and duck are fishing on a dock. Donald excitedly exclaims, “Look Mickey, I’ve hooked a big one!” The character’s words are written on the canvas. Mickey laughs behind his hand. The duck has only managed to catch his shirt above his own tail. This is an example of the type of appropriation Lichtenstein used for his Pop art, based on popular culture at the time.

Swiss born, American based Pop art artist Claes Oldenburg (1929-) crafted the sculptural pop art fountain entitled Spoonbridge and Cherry, in 1988. The work, with a large cherry, resting on the upper most curve of the spoon, permanently resides in the Minneapolis Sculpture Garden. The sculpture crosses over a small pond representing a “bridge”. Built from stainless steel and aluminum, with a coating of polyurethane enamel, the spoon weighs in at a hefty 5800 pounds, while the cherry weighs 1199 pounds. Water is emitted from the base of the cherry, as well as its stem.

Pop art artist Andy Warhol caused further controversy, challenging the public’s perception of what art is. Brillo Box (1964) is a Pop art sculpture and a copy of a consumer product. While household Brillo soap pads came in corrugated cardboard boxes, Warhol’s Pop art was constructed from wood with polyvinyl acetate and silkscreen ink.

Later, Warhol would craft other Brillo Boxes based on the original at MoMA, in New York. For example, in 1970, he produced one hundred of them for the opening of the Pasadena Art Museum, now called Norton Simon Museum.