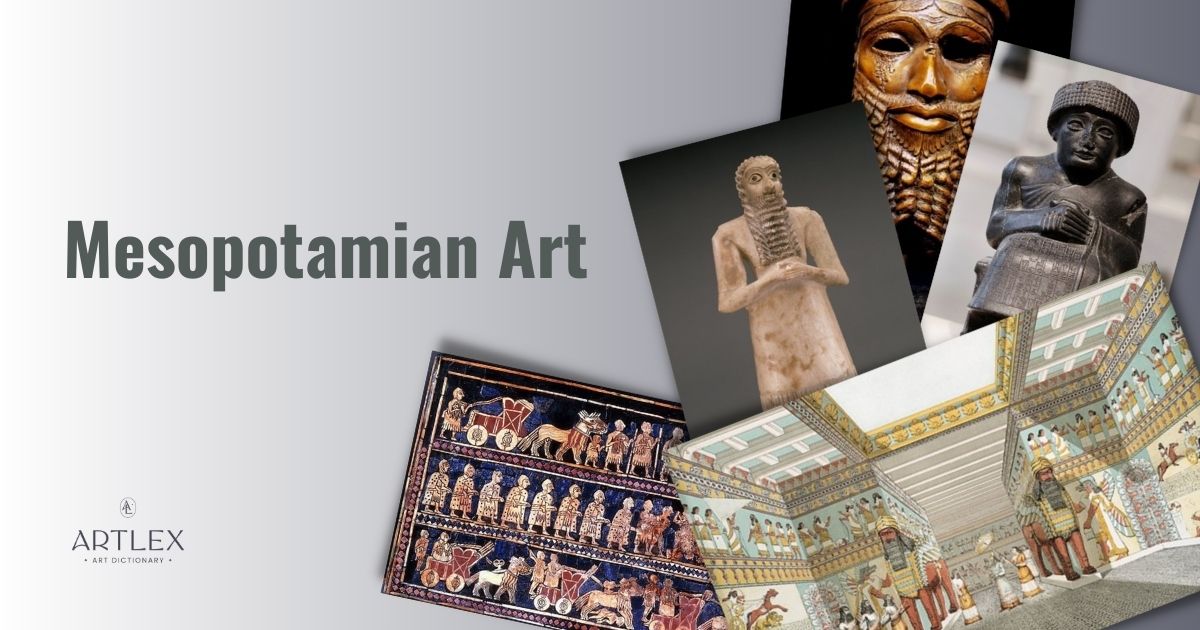 What is Mesopotamian Art?

Mesopotamian art encompasses art and architecture from the ancient Near East beginning in 3500 BCE and lasting until 331 BCE.  Mesopotamia was an area that stretched across the areas now known as Iran, Iraq, Kuwait, Lebanon, Israel, Palestine, Syria, Jordan, and Cypress. Mesopotamian art was influenced by religion, patron god or goddesses and the king.

History and Expansion of Mesopotamian Art

Art and architecture of the ancient Near East or Mesopotamia was created in regions that are today known as Iran, Iraq, Kuwait, Lebanon, Israel, Palestine, Syria, Jordan, and Cypress. It was influenced by religion, patron god or goddesses and the king. Political power changed continually.  The many groups in power provided aesthetic and cultural interchanges which furthered Mesopotamian art.

The city-states and cultures are further categorized into Sumerian, Akkadian, Neo-Sumerian, Babylonian, Assyrian, Neo-Babylonian, and Persian.  Under Persian rule during the Achaemenid dynasty, the empire reached out as far as ancient Egypt.

What are the Characteristics of Mesopotamian Art?

Painting was used as wall art, although little survives, and for creating painted pottery. Predominant colors include red, white, and blue. Themes include people, worship, animals, and geometrical patterns.

Due to a lack of stone in the region and therefore the cost, most Mesopotamian sculptures are small to medium in size.  Materials used to make sculpture includes terra cotta, limestone, alabaster, jasper, or bronze.

Human figures are strong and broad with round faces, large eyes, and bushy brows. Hair is given curls in stylized patterns. Some human figures are in profile, while others are in three-quarter view

Cylindrical seals were made of stone, glass, obsidian, lapis lazuli and other semi-precious stones. Small texts were carved in cuneiform script to indicate the owner. Many were drilled at the top and made into necklaces.

Pottery and Ceramics in Mesopotamian Art

Pottery had a utilitarian purpose and an aesthetic one. Pieces were crafted for daily use such as plates, bowls, cups, jugs, and storage containers. Larger pieces were built for carrying objects.

Ceramic pieces were designed for items that would be used in worship. Glazed bricks were even used in special architectural buildings to create beauty.

Monumental ziggurats and palaces were constructed from mud baked bricks. These architectural spaces illustrated the importance of religion and the power of the king.

The Sumerian situated themselves in the Fertile Crescent, an area rich in agricultural land for growing grains in ancient Mesopotamia.  This southern part of Mesopotamia between the Tigris and Euphrates rivers is now Iraq and Kuwait. The word Mesopotamia means land between two rivers.

An advanced civilization, experts in argriculture, canals and irrigation, the Sumerians also built ships to travel the Persian Golf for trade. They developed the very first writing system known as cuneiform during the Early Dynastic Period (2900-2350 BCE). This was a huge achievement in early Sumerian culture.

Areas were comprised of city-states, and each had its own temple dedicated to a patron god and goddesses, with priests to precede over religion and a king to rule. The religion they practiced was Animism, the belief that nature was controlled by gods.

Sumerians were the first to build ziggurats a major contribution to Mesopotamian art and architecture. These were large, tiered structures rising on four sides to raise temples upon. The oldest surviving one is White Temple and its Ziggurat, constructed in the last fourth century BCE in Uruk, which is now Iraq. Made from mud brick, as stone and wood were unavailable in the region, the base measures 40 feet across. The whitewashed façade was given its color from ground shells and bones. People could ascend the structure via a ramp or stairs.

Votive figures placed in temples, used to represent the owner of the statue in prayer, were also a Sumerian creation. The Statues of votive figures from the Square Temple of Eshnunna dating back to 2700 BCE are Mesopotamian religious offerings. Found in Tell Amar, Iraq, the objects made from gypsum, inlaid with shell and black limestone are of various heights.

Votive figures in general are often depicted as terrified, with large eyes and hands clasped in prayer. It was believed that constant prayer was always required to appease the gods.

In the Early Dynastic period, Uruk was the capital of southern Mesopotamia. Archeologist Sir Leonard Wooley uncovered the city of Uruk and the Tombs of Ur, in Tell el-Muqayyar. The 16 royal tombs were excavated during the 1920s and 1930s. Here a king and queen were found with 74 attendants. The cemetery and tombs revealed findings of great wealth including gold, silver, bronze, and semi precious stone much of which was crafted into headdresses and jewelry. There are many fine examples at the Metropolitan Museum in New York, as well as the British Museum, in London, United Kingdom.

Standard of Ur from the Royal Tombs at Ur dating to between 2600-2400 BCE is a utilitarian wooden box depicting battle and banquet scenes set in three registers  to show various classes within society. It is lavishly decorated with semi precious stones and shells gathered through trade. Today, it is housed in the collection of The British Museum.

War was always forefront in the minds of the people during the Akkadian empire. Head of Akkadian Ruler, discovered in Iraq and created between 2250-2200 BCE is a bronze sculpture of a life-sized head with a strong facial structure, and long stylized beard. The face of the sculpture which has one eye smashed out, is part of the Iraq Museum in Baghdad, Iraq.

Stele of Naram-Sin, located at the Louvre, in Paris, France, is a vertical a stone monument relief sculpture made from pink limestone, in 2250 BCE.

The Akkadian artwork commemorates their victory over the Lullubi Mountain people. Hierarchical scale is used with Naram-Sim at the top of the mountain.

While not much in the way of larger sculptures survived there are many examples of cylinder seals. Although invented by the Sumerians, cylinder seals were perfected by the Akkadians. These were crafted in stone, glass and semiprecious stone and engraved intaglio.

Cylinder seals were used to mark private property or to legally bind documents during the Akkadian empire.

Once in power again the Sumerians built the Ziggurat of Ur as a power play. Made for the moon goddess Nanna the divine goddess of the city state, it had a bedchamber at the summit. Constructed of baked mud brick, art historians estimate the building once stood between 70 and 100 feet tall. Three staircases led to the main tier in a bent axis. One staircase led to a second tier. The Ziggurat of Ur is the best-preserved example of a ziggurat.

The Statue of Gudea crafted in 2090 BCE and on view at the Metropolitan Museum of Art, in New York, is one of numerous sculptures made its ruler Gudea and his son Ur-Ningirsu who would lead after him. Gudea is depicted seated before his subjects, with his hands folded in peacefulness and prayer.

The Code of Hammurabi was the most important piece of art produced during the Babylonian period and the earliest law code ever written. This stele made from basalt and carved in relief sculpture is incised with text. There are 300 laws, inscribed in the Akkadian language, in cuneiform script.

The work also depicts images of King Hammurabi, the ruler during the Babylonian period, with the sun god and god of justice, Shamash, on his left. The figures are shown in twisted perspective with a Hierarchy of scale.

The Hittite would conquer Babylonia putting an end to the Babylonia period. Then came an era of foreign rule between 1600-1200 BCE.

Three major cities were constructed during the Assyrian empire giving rise to new Mesopotamian art. These included Kalhu, Dur Sharrukin, and Nineveh, all designed with architecture and art depicting most notably the hunting of wild animals, ceremonies, and war.

In the 1840’s celebrated archeologist Sir Austen Henry Layard made an important finding in art and architecture from the ancient Assyrian empire. In Nimud, he excavated a palace from the reign of King Ashurnasirpal II. The huge, winged bull found is a prized art object now owned by The British Museum.

This region between the Tigris and Euphrates rivers proved to be full of treasures when not far away Henry found Nineveh and the Sennacherib’s palace. He was king between 704 and 681 BCE. The intricately carved stone panels found embellished the rooms and courtyard of his home. Scenes tell the narrative of the ancient Assyrian empire. In one, workers transport the 30-ton head of a lamassu to the entrance of the palace. Other panels depict military endeavors. Many of these works can be found at The British Museum.

Most importantly numerous stone tablets with cuneiform script were important to learning more about the history of the people of Mesopotamia.

In 1988, archeologists from Iraq discovered four more tombs in the Palace of Ashurbanipal II who ruled between 883-859 BCE. The tombs were filled with gold jewelry and objects inlaid with precious stones.

The alabaster carved Lamassu from the Citadel of Sargon II were created between 720-750 BCE, were built as powerful Mesopotamian guardians. A lamassu is a mythical creature with the head of a man and the body of a winged bull. These massive stone works, each standing 14 feet tall, along with the fortress, helped to protect the city of Dur Sharrukin, now Khorsabad, Iraq. This stunning achievement of the Assyrian empire are on display at the Metropolitan Museum of Art, in New York.

Ruler Nebuchadnezzar II reconstructed Babylon to a city of grandeur. The road to the monumental blue bricked Ishtar Gate was called the Road of the Gods or Processional Way. The mudbricks were glazed in blue using glass that the Babylonians produced. This was ground into powder to which small quantities of cobalt, copper-oxide and water were added. Over 20,000 bricks make up the gate.

The Ishtar Gate and the walls leading up to it contained animal depictions of lions, dragons, and bulls, both fierce predators and sacred to the Babylonian gods. Today the structure is housed at Pergamon Museum in Berlin, Germany.

The Hanging Gardens of Babylon were one of the Seven Wonders of the World. A wife of Nebuchadnezzar II requested the mountainous garden as a way of adding life and color to the barren landscape. The garden believed to have measured over 400 feet high contained plants, flowers, and fruit trees, all kept lush by canals and water pump systems.

The Persians created the largest empire during the Achaemenid dynasty, the scope of which began in Iran and stretched to ancient Egypt. This region became multicultural, and art was influenced by both Egypt and Greece.

The capital of Persepolis flourished under two kings. Darius I ruled between 521-486 BCE and Xerxes between 485-465 BCE.

Audience hall (apadana) of Darius and Xerxes built between 520- 465 BCE, from mudbrick with a limestone facing had a raised wooden roof on 72 columns. Capitals on some of the columns contain the face of a bull. Art historians believe the Mesopotamian palace was once painted.

Alexander the Great would crush Audience hall (apadana) of Darius and Xerxes, along with Persia.