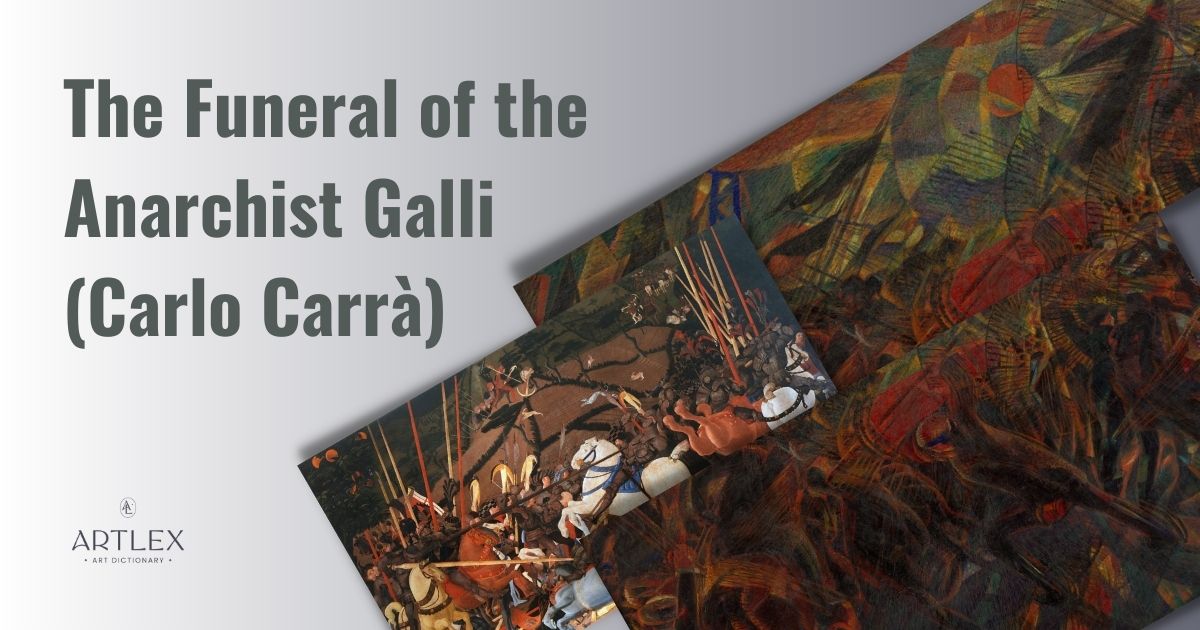 What is depicted in The Funeral of the Anarchist Galli?

In the painting, The Funeral of the Anarchist Galli, the conflict between the participants of the funeral procession of Angelo Galli and the police is presented.

The Funeral of the Anarchist Galli – Analysis

In the early years of the twentieth century, the general strike became a model of workers’ struggle in Italy. The first general strike was organized in September 1904. Police brutality was often the response of the ruling structures to this form of worker solidarity. General strikes were repeated in 1905, 1906, 1909, 1911, and 1914. The young anarchist Angelo Galli was one of the organizers of the 1906 strike. Galli was killed by security guards of the Macchi and Pessoni factory in Milan on May 10th, 1906. Galli’s funeral, held three days later, was controversial from the perspective of the authorities who feared an escalation of violence and the potential spread of unrest because the labor movement was well-networked in the north of Italy. Numerous workers, as well as supporters of anarchist ideas, gathered carrying flags and symbols of the anarchist struggle. Gendarmes on horses tried to prevent the column from entering the cemetery, but they resisted and this caused a violent confrontation. Carlo Carrà attended the funeral and wrote about it in his memoir La mia vita from 1945: I found myself unwillingly in the center of it, before me I saw the coffin, covered in red carnations, sway dangerously on the shoulders of the pallbearers; I saw horses go mad, sticks and lances clash, it seemed to me that the corpse could have fallen to the ground at any moment and the horses would have trampled it. Deeply struck, as soon as I got home I did a drawing of what I had seen.

1910 Study for The Funeral of the Anarchist Galli

Carrà’s study for the Funeral of the Anarchist Galli in 1910 is a coloristically reduced composition with elements of post-impressionist figuration. Carrà abandoned this solution after going to Paris in 1911. There he met the ideas of Cubism, which significantly influenced the second and final version of the painting the Funeral of the Anarchist Galli. The painting was presented at the first Futurist exhibition in Paris at the Galerie Bernheim-Jeune. Umberto Boccioni, Gino Severini, and Giacomo Balla also took part in the exhibition.

The Funeral of the Anarchist Galli – structure of the composition

The Funeral of the Anarchist Galli presents a clash between police and anarchists in Milan. Carrà presented the escalation of violence at the funeral by confronting the gendarmes on horseback in the left part of the picture while the defending anarchists occupy the right segment. Carrà paid great attention to the upper part of the composition and the refraction of sunlight, which dictates the color relations of the entire composition. The central part of the painting is occupied by the coffin with the body of the murdered anarchist, which is covered with a red cloth. Carrà evoked the eruptive energy of violence with a free stroke of the brush and the multiplication of horizontal and vertical lines that follow the movements of people in the crowd. The divisionist principle that Carrà applied creates the impression of a uniform tension – a tension that does not leave a point where the viewer can withdraw and observe from it but is pulled into a vortex of aggression that is present with the same intensity throughout the composition. Blue and violet-green tones followed by orange and yellow at the top of the composition are mirrored at the bottom, intertwined with the shadows of people in motion. The bearers of the conflict, the gendarmes and the anarchists, are represented in muted shades of brown, thus forming a homogeneous mass of enraged individuals. The absence of the expected dignified silence and rhythmic marching that the images of funeral processions exude is a key factor in the discomfort and horror this image deliberately causes. The central element, i.e. the coffin with the dead body, was carried by people surrounded by the police in a conflict with their comrades. The possibility of the corpse of a murdered anarchist ending up on the ground and thus being symbolically killed again forms the zenith of the uneasiness that this composition provokes. As a kind of protector or bearer of the dead anarchist’s ideas, the man in the foreground is depicted, swinging combatively at the gendarmes. It is this figure with his unwavering passion that actually stabilizes the overall scene of chaos. It stabilizes it in such a way that it brings confirmation of the certainty of the fight to the last participant. In addition to the horizontal and vertical lines that repeatedly follow the movements of conflicting people, the relations of horizontal, vertical, and diagonal lines generated by banners, lances, flagpoles, and cranes are also significant for the dynamism of the scene.

One of the most important theorists of modern art, Alfred H. Barr, Jr. linked the Funeral of the Anarchist Galli and Paolo Uccello’s Battle of San Romano triptych based on the organization of the composition, its lines, and masses. Afterward, art historians often returned to that thesis and linked this painting with the central piece from the triptych Niccolò Mauruzi da Tolentino unseats Bernardino della Carda at the Battle of San Romano, which is located in The Uffizi Gallery. It is certain that Carrà was familiar with this image, but taking into account the extremely radical position that the Futurists had in rejecting the Renaissance heritage, a deliberate reference to Uccello would not be in accordance with the positions that he expressed, among other things, in the manifestos. Along with Umberto Boccioni, Luigi Russolo, Giacomo Balla, and Gino Severini, Carlo Carrà is the author of the Manifesto of the Futurist Painters from 1910. In this manifesto, it is written

We will fight with all our might the fanatical, senseless and snobbish religion of the past, a religion encouraged by the vicious existence of museums. We rebel against that spineless worship of old canvases, old statues and old bric-a-brac, against everything which is filthy and worm-ridden and corroded by time. We consider the habitual contempt for everything which is young, new and burning with life to be unjust and even criminal. Comrades, we tell you now that the triumphant progress of science makes profound changes in humanity inevitable, changes which are hacking an abyss between those docile slaves of past tradition and us free moderns, who are confident in the radiant splendor of our future. We are sickened by the foul laziness of artists, who, ever since the sixteenth century, have endlessly exploited the glories of the ancient Romans.