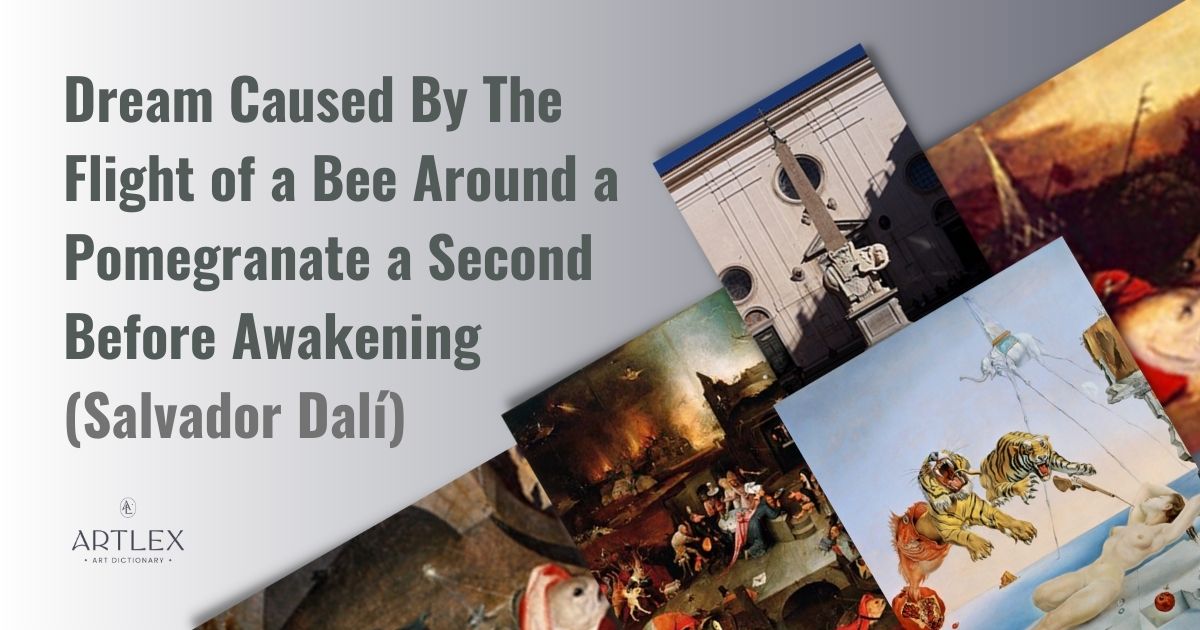 The ‘Dream Caused by the Flight of a Bee Around a Pomegranate a Second Before Awakening’ was painted by Salvador Dalí in 1944. The dimensions of the work are 51 x 41cm, and the medium used is oil paints on a wood panel. The artwork is on display at the Museo Nacional Thyssen-Bornemisza, in Madrid, Spain.

This painting depicts Gala, Dalí’s wife, in the midst of a dream. Influenced by Freud’s theories on dreams and the unconscious mind, Dalí explores in this work the complex, nonsensical and symbolic nature of dreams. According to Sigmund Freud, the unconscious mind holds material that is hidden from our conscious awareness because it is too uncomfortable to recognize and thus can get revealed in our dream state. The long title of the piece and bizarre juxtapositions in this image indicate Dalí’s intention to present a visual psychoanalytical work.

Dalí produced this painting during his stay in America, where he was more engaged in commercial art and devoted little time to painting. This work represents a return to his ‘paranoiac-critical method’ through which he would self-induce paranoia and hallucinations to create a “hand painted dream photograph”, as he often described his art. 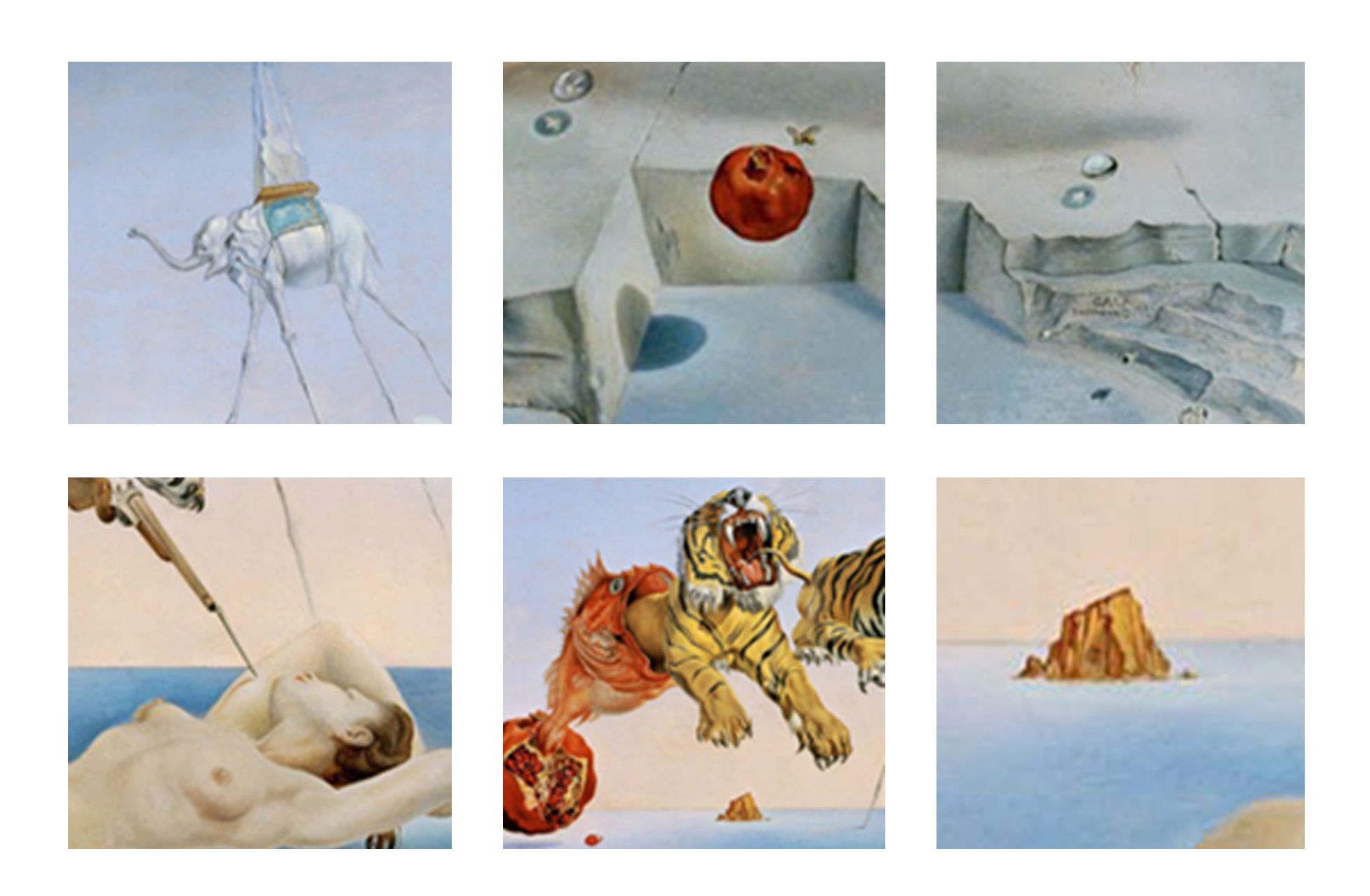 What is Depicted in the Artwork?

The piece depicts the sleeping nude figure of Gala, Dalí’s wife, and muse, levitating above a floating rock in a serene seascape with a moon and small rock islands. Beside Gala’s naked body, two suspended droplets of water, a pomegranate, and a bee are also floating in air with their shadows cast on the flat rock. In the upper part of the painting above the horizon line, Dali displays the dream of Gala, which is prompted by the buzzing bee as indicated in the title of the piece. A gigantic rockfish jumps out of a pomegranate that burst open and spews out of its mouth two menacing yellow tigers ready to attack the oblivious sleeping woman and a rifle with a bayonet about to pierce her skin. In the background, a bizarre elephant carries an obelisk on its back while walking in the sea balancing on really long and thin legs.

In this dreamlike nonsensical imagery, Salvador Dali captures a moment full of tension and terror a second right before Gala awakens from this dream, which feels more like a nightmare. According to Dali’s own words, the piece was intended “to express for the first time in images Freud’s discovery of the typical dream with a lengthy narrative, the consequence of the instantaneousness of a chance event which causes the sleeper to wake up. Thus, as a bar might fall on the neck of a sleeping person, causing them to wake up and for a long dream to end with the guillotine blade falling on them, the noise of the bee here provokes the sensation of the sting which will awaken Gala.”

In this work, Dali displays his knowledge of art history and pays homage to the Renaissance and Baroque old masters.  The elephant is a distorted version of Bernini’s Elephant and Obelisk sculpture which stands at the Piazza della Minerva in Rome, while the gigantic fish alludes to Hieronymus Bosch’s depictions of fish. The reclining female nude reminds us of classical representations of Venus, which is often associated with the symbol of fertility, the pomegranate. The casted shadow of the pomegranate on the edge of the rock takes the shape of a heart.

This piece is filled with symbolism which can have multiple meanings, and each element is carefully chosen by Dali who understood symbols. Following Freud’s theories, Dali intended to represent unconscious thoughts, motivations, and repressed sexual desires in a symbolic imagery that contained the same ambiguity of dreams.

Many elements such as the pomegranate, the tigers, the fish, the elephant, and the rifle may appear random and nonsensical at first glance, but all have a deeper meaning which is open to interpretation. The open blue space may be interpreted as the subconscious.  The bee relates to Freud’s theory of when one is in deep sleep, can be awakened by an external physical stimulus such as the stinging of a bee. According to Freud the plot in a dream can be influenced by stimuli from the external world which can trigger the subconscious of the sleeping person to transform it into an image that is comparable to the stimulus. If the external stimulus poses an actual threat, then the image in the dream may also take a threatening form that can provoke the awakening. In this case, the tigers symbolize the danger from the bee, and reflect the yellow and black colors of the insect, while the riffle’s bayonet represents the threat of the bee sting.

The nude female and aggressive tigers might also allude to the theme of sexuality, (repressed sexual desires, or aggressive and sexual instincts), a central theme that is usually explored by Salvador Dali and other artists of the Surrealist movement.

The color palette of the painting is made primarily of light pastel colors of cool blue and gray tones with contrasting warm tones of bright oranges, browns, and yellows. The painting has a subdued atmosphere with a soft gradient of blue fading into light orange, which suggests a sunrise or early evening time. The body of Gala is rendered in warm neutral skin tones, while the pomegranate, fish, and tigers pop up vividly, like a fire, in vibrant orange and yellow tones. The colors and shapes are painted in a hyperrealistic style to enhance the naturalistic qualities of the elements and blur the boundaries between dream and reality; each element is painted with meticulous refined detail while light and dark tones are used to create volume.

There is a limited use of shadow in the painting, implying a lack of direct light, except on the left bottom under the flat rock which creates the impression that the rock is floating on top of calm waters.

The texture of this piece is rendered very smooth in all elements, producing an effect of softness and a dream-like haze in the scene.

The mood of this piece is both very serene and alarming. The tranquility of the environment, however, is interrupted by a feeling of dread, that something bad is about to happen when one witnesses the two ferocious tigers looming over the sleeping woman.

The composition involves the use of perspective as indicated by the horizon line and the small rocky island in the distance. The naked female figure is positioned in the foreground just below the center of the piece, the tigers in the middle ground, and the sea and elephant in the background. The focal point of this piece is the two tigers, just off the center of the piece, which display dominance over the vulnerable naked body of Gala who is about to be preyed on. The space between the tigers and Gala intensifies the drama of the inevitable moment, which will, fortunately, be released upon the awakening of the dreamer. There is a fair amount of empty space in this piece, both in the sea and the sky which enhances the feeling of tranquility and draws attention to the depicted elements in the painting.

The sizes of the pomegranate and fish are exaggerated in size compared to the rest of the elements in the composition, which emphasizes the dreamlike quality and symbolism of the work.

Other Artwork by the Artist

Some paintings in similar style by Salvador Dali: