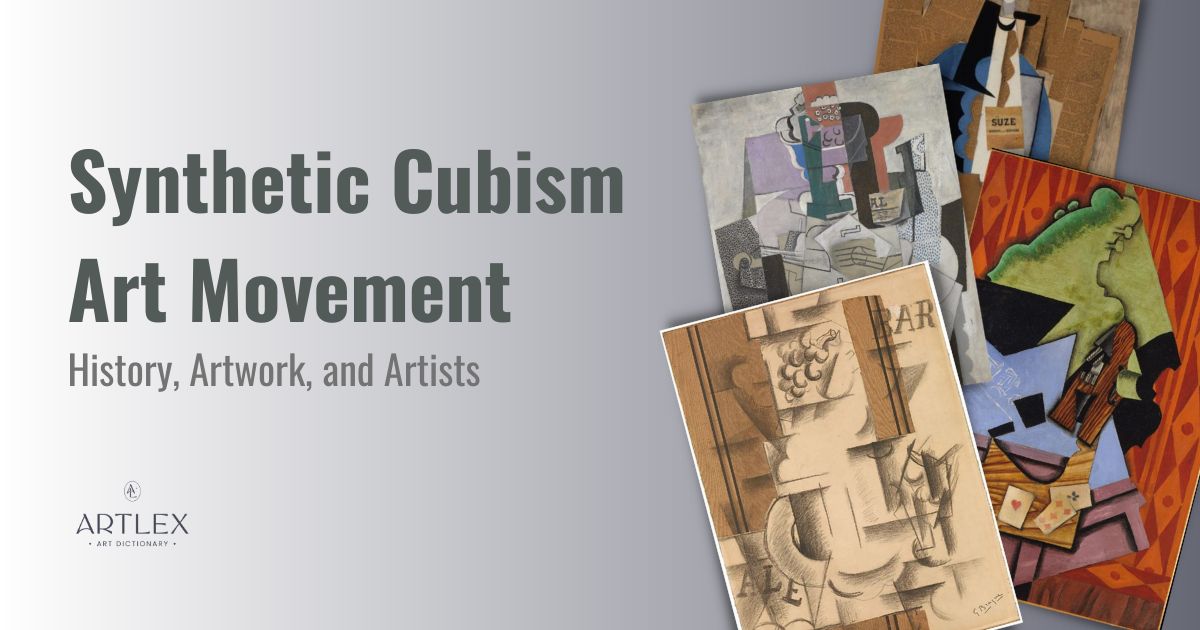 Synthetic Cubism is the second phase of the Cubism art movement that lasted from 1912 to 1914, around the time of the first world war. Led by artists Pablo Picasso and Georges Braque, Synthetic Cubism is characterised by flat depictions of everyday objects and bolder, more symbolic compositions than its antecedent, Analytical Cubism. Many art historians also acknowledge the artist Juan Gris as a key figure in Synthetic Cubism.

Unlike the deconstructive process of Analytical Cubism, artists working in the style of Synthetic Cubism represented its chosen subject matter, usually real objects and people, through a synthesis of everyday materials and oil paint. This new style of Cubist representation was highly influential and many Synthetic Cubist works are generally considered to be the earliest examples of collage art.

The original Cubist art movement emerged around 1907. Cubism rejected the use of one-point linear perspective and presented a new visual language that depicted subjects from multiple perspectives at the same time. The result of this method was a heavily abstracted composition that represented the subject from all angles. Cubism’s novel handling of form signaled a shift from the existing conventions of European modernist painting. This initial phase of Cubism would later be labelled as Analytical Cubism.

Around 1912, the second major phase of Cubism emerged: Synthetic Cubism. While Analytical Cubism favored the analysis of deconstructed forms and compositions that represented multiple perspectives in the same picture plane, many artists working in the Synthetic Cubist style preferred to flatten their subject matter entirely, creating two-dimensional depictions of objects and people. This new way of conceiving form would eventually prove the work of Pablo Picasso and Georges Braque to be influential beyond the conventions of Cubism. Many of the fine art movements that followed would embrace the many new techniques manifested in Synthetic Cubist artwork.

What is the difference between Synthetic Cubism and Analytic Cubism?

Synthetic Cubism differed from Analytical Cubism in its integration of everyday objects and simple shapes with oil paint on canvas. Mixing materials such as pasted papers, newspapers, wallpaper and bottle labels created more cohesive, yet still fragmentary, images within the Cubist style. Pablo Picasso’s Still Life with Chair-Caning from 1912 depicts and embodies a café atmosphere, as it includes an actual piece of wicker chair caning alongside oil paint, and pre-printed oil-cloth. Textual elements, typically reserved for printed media, begin to appear in these works as well. In Still Life with Chair Caning the word “JOU,” French for “game,” appears on the top left side of the piece. Synthetic Cubism’s integration of these unexpected elements reflected the new pictorial language of Cubist works that spoke through materials rather than to them.

Cubist artist Juan Gris frequently used bold colors and simple forms in his interpretations of subject matter through the methods used in Synthetic Cubism. Often considered to be a precursor to Pop Art, Synthetic Cubism simplified the visual conventions presented in Analytical Cubism by reducing the number of vantage points and shapes in a composition. Synthetic Cubists did this by using larger blocks of color and simple yet repetitive patterns. This combination of aesthetic choices worked to simplify the overall picture plane, moving the final piece further away from a heavily abstracted, yet complicated, image and toward a more expressive representation of reality. The same bold colors and repetitive patterns would be embraced by many artists throughout history.

Synthetic Cubist artists formalized the papier collé technique of pasting bits of paper onto a flat surface such as a canvas. In the early 20th century, these procedures for laying out and gluing various papers to their new surface resembled commercial design strategies more than they did the permanence and compositional unity of the fine arts. Georges Braque’s Fruit Dish and Glass from 1912 is an early example of papier collé, the pasted paper technique that we now know as collage, being used to add texture and depth to an artwork. The addition of sand, wood grain paper (faux bois in French) and wallpaper to Braque’s painting marked a turn toward a more playful approach to art-making. Rather than creating fine art to depict the illusion of reality, Synthetic Cubism used existing materials, such as wood grain paper, to confront the viewer with actual pieces of reality. Works like Fruit Dish and Glass by Georges Braque, by incorporating scraps of real world objects with traditional art materials, demonstrated how introducing physical elements into Cubist works and synthesizing them into a new style could redefine the still life convention and fine art itself. For this reason, Fruit Dish and Glass is often considered to be among the first collage works produced within the canon of Western art.

Artists working in the style of Synthetic Cubism assembled images in a way that pushed the boundary between two- and three-dimensional space while also challenging the medium-specific conventions of sculpture and painting. Through this style, multi-layered objects now existed on two-dimensional surfaces, which in turn expanded the long established tradition of sculpture as well. While Western representational sculpture was typically carved or modelled using reductive or additive methods, Pablo Picasso and Georges Braque assembled their sculptures using material cut-outs and other scraps of readily available material. Picasso and Braque were heavily influenced by African Grebo masks. One such example of this influence lies in their representation of musical instruments, like the guitar seen in Pablo Picasso’s Guitar from 1914. Picasso’s Guitar makes use of cardboard cutouts to demonstrate how forms can be represented piece-by-piece, as mere suggestions of the whole figure, and still be read and understood in the context of the entire image. Simply suggesting substance and void, rather than depicting it, built upon the symbolic representation that Synthetic Cubism readily embraced in its papiers collés.

For Picasso in particular, the faceted planes of Synthetic Cubism reflected the political turmoil of a fractured present. Picasso’s Glass and Bottle of Suze from 1912 valued the use of newspaper clippings for more than their mass produced, anti-art qualities. Picasso left the majority of the articles included in this piece in readable condition. The artist used the multi-layered, flattened picture plane to evoke not only the sense of the glass and bottle on a table, but also managed to allude to the act of socializing and discussion around that same café table. Many of the articles Picasso selected were published in 1912 and told of the war in the Balkans as well as the anti war rallies occurring in Paris at the time. In the instance of Glass and Bottle of Suze, Synthetic Cubism became an avenue for political commentary, a concept that was becoming increasingly popular among Modernists around the first and second World Wars.

The Influence of Synthetic Cubism on Modern Art

The Cubism movement, including both Analytic Cubism and Synthetic Cubism, is one of the most famous and influential Modern art movements of the twentieth century. Cubist artworks made by artists such as Picasso, Braque and Gris are housed in permanent collections at the Metropolitan Museum of Art, the Musée Picasso and other prestigious museums all over the world. Synthetic Cubism’s lasting influence on twentieth century art is evident in the continued use of collage art and textual elements throughout other art movements that began to emerge around the time of the first and second World Wars including Dada, Futurism and Surrealism. The revolutionary turn to mixed media production, collage and flattened depictions of subjects using everyday items, initiated by Pablo Picasso and Georges Braque, can be traced from Analytic and Synthetic Cubism all the way through art history to Pop Art and Contemporary Installation Art.