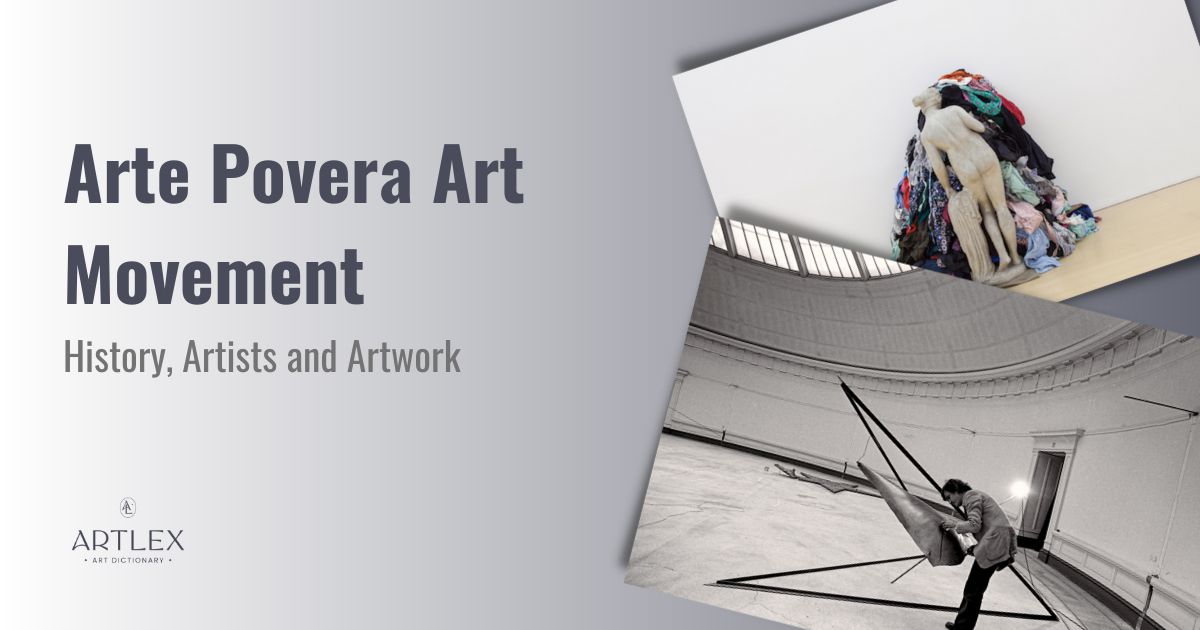 What is Arte Povera?

Arte Povera (Poor Art) is a contemporary art movement developed between the late 1960s and the 1970s in Italy. Arte Povera group had as its main center of activity the city of Turin, in Northern Italy. Arte Povera is distinguished by the use of non-conventional media and the political radicalism of the artistic practice. Italian artists often used very simple and everyday materials, far from those in vogue in the art market place and academic tradition.

The term Arte Povera literally means ‘poor art’, ‘impoverished art’, ‘inexpensive art’, to emphasize the essential and radical simplicity of its artistic research. Artists used an extended range of poor materials, such as rags, wood, iron, twigs, soil, natural elements or industrial waste, to obtain elementary and artisanal forms of expression typical of pre industrial age. The concept of Arte Povera was to make even disused materials speak for themselves, believing in the expressive possibilities of nature and vegetal world, but also of physical, chemical, or simple mental processes.

The expression Arte Povera was first used in 1967 by Italian art critic Germano Celant, during the first exhibition of the visual arts group at La Bertesca Gallery in Genoa. Celant was a key figure in promoting, theorizing and supporting the movement. Using the term ‘poor’, he did not want to identify the economic aspect of the artists. On the contrary, he wanted to highlight the attitude of the arte povera artists to challenge the commercial system of art galleries through the use of poor or impoverishing materials. An attitude that was common to all the artists involved in the movement. Celant’s critical texts were essential to establish the collective identity of the group, otherwise fragmented into autonomous artistic practices.

The countercurrent and anti-artistic spirit that united the artists of arte povera was also the result of the atmosphere of revolutionary political change that characterized the end of the 1960s in Italy. For this reason, Celant titled the article published in Flash Art in 1967, which defined arte povera, Arte Povera. Appunti per una guerriglia (Poor Art. Notes for a Guerrilla War), to underline the subversiveness and freedom from conventions of the art movement protagonists.

The Arte Povera movement is part of a broader and more established tendency towards Conceptual Art of the 1950s and 1960s. It shares some theoretical concepts and use of materials with the experiences of Pop Art, Minimal Art, and Land Art. In addition, Arte Povera’s use of simple, reused materials and its subversion of meaning also brings it closer to movements such as Fluxus and Nouveau Realism. Precursors of Arte Povera in the Italian panorama were also Piero Manzoni, Lucio Fontana, and in particular, Alberto Burri. Burri proposed in the 1950s the series Sacchi (Sacks), realized by gluing jute sacks on monochrome canvas. The Italian painter reiterated the importance and significance of poor materials, used in art not as a symbol but as veritable ‘devices of painting’.

The official starting point of Arte Povera is due to the first collective exhibition Im Spazio (The Space of Thoughts), held at the Galleria La Bertesca of Francesco Masnata in Genoa in September and October 1967. On this occasion, the curator Germano Celant, among Arte Povera‘s major proponents, coined the expression in his manifesto-article published in the fifth issue of the art magazine Flash Art. The first exhibition displayed young Italian artists such as Alighiero Boetti, Luciano Fabro, Jannis Kounellis, Giulio Paolini, Pino Pascali, and Emilio Prini.

The following year, in 1968, the artists (with the addition of Mario Merz, Ceroli, and Piero Gilardi) were the protagonists of a second collective exhibition, curated at the Galleria de Foscherari art gallery in Bologna. One of the most famous exhibitions that consecrated the movement was undoubtedly Arte povera – più azioni povere (Poor Art – poor actions), organized in October 1968 by Germano Celant with the support of the collector and publisher Marcello Rumma in the Ancient Arsenal of Amalfi. Here The artists Giovanni Anselmo, Alighiero Boetti, Luciano Fabro, Paolo Icaro, Jannis Kounellis, Gino Marotta, Mario Merz, Marisa Merz, Giulio Paolini, Pino Pascali, Gianni Piacentino, Michelangelo Pistoletto, Emilio Prini, and Gilberto Zorio were also related to relevant figures of Conceptual, Post-Minimalist, and Land Art.

The international recognition of the Arte Povera movement in the contemporary art scene of the twentieth century came in 1969, with the exhibition When Attitude Become Form curated by Harold Szemann. The exhibition was set up in the space of the Kunsthalle in Bern and presented a radically innovative curatorial setup, conceived as a linguistic medium. In this revolutionary exhibition for the curatorial structure, participated Alighiero Boetti, Pier Paolo Calzolari, Jannis Kounellis, Mario Merz, Pino Pascali, Michelangelo Pistoletto, Emilio Prini, and Gilberto Zorio. The notoriety of the art movement was also supported by Germano Celant’s pioneering texts, including the 1985 Electa Arte Povera edition.

Arte Povera influenced contemporary art, even after the 1960s. It influenced Italian conceptual art but also international currents, such as the Japanese Mono-ha group, which focused on the essentiality of materials, or the anti-form trends in the United States, which wanted to go beyond the predefined industrial formal structures, rediscovering craftsmanship and informality.