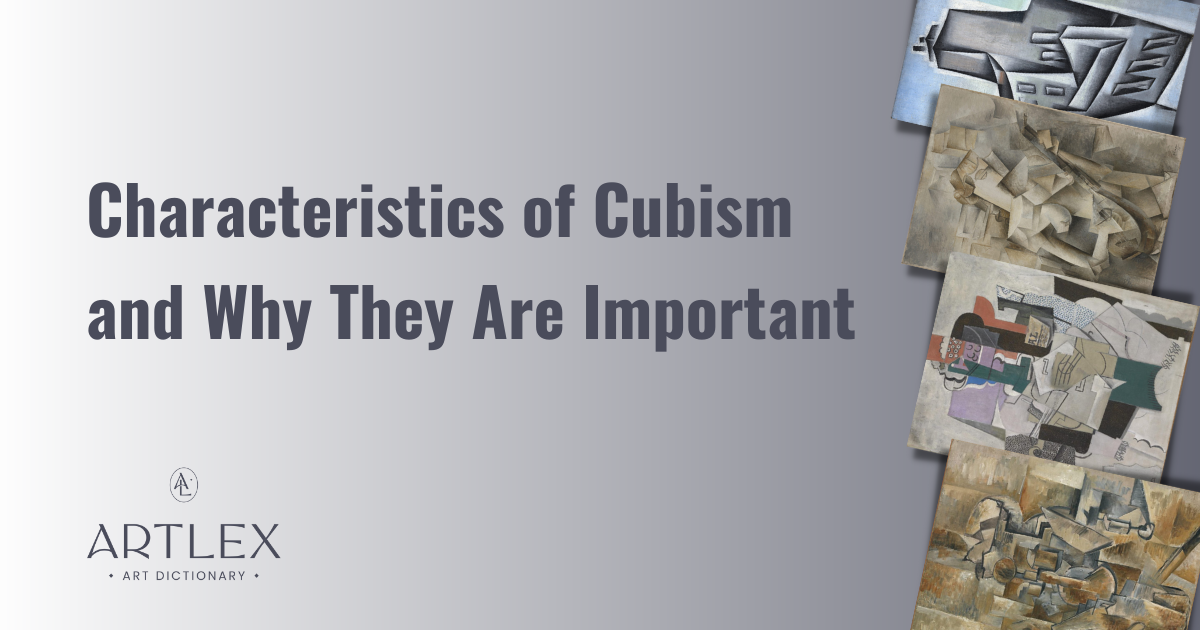 Cubism is a Modern art movement that emerged around 1907 in Paris, France. Four important characteristics of Cubism are the application of multiple perspectives, the use of geometric shapes, a monochromatic color palette, and a flattened picture plane.

Cubism’s novel handling of form, color, and perspective signaled a shift from the existing conventions of European modernist painting. Cubism reimagined the treatment of form by rejecting the traditions of perspective, modeling, and foreshortening. The result of this method was a heavily abstracted composition that represented the subject from all angles or with overlapping picture planes.

Cubists intended to depict the entire structure of objects and people in their paintings without using techniques such as perspective or graded shading to make them look realistic. They wanted to show their subjects as they really were rather than create an illusion of an object or person.

The use of linear perspective and the illusion of depth favored by the Renaissance movement were in stark contrast to the two-dimensionality that Cubists worked to define. Cubist artists depicted their subjects from multiple perspectives simultaneously, working to represent every angle of the subject on the flat surface of a canvas and within a single picture plane.

The image below depicts Juan Gris’, Houses in Paris (Maisons à Paris), (1911) where the structure seems to be visible from multiple angles at once. The result is a house that appears distorted yet still recognizable as a house.

Cube-like imagery, as well as other geometric forms like cones, spheres and cylinders often appear in early Cubist paintings and again later in the movement in Cubist sculptures. Cubists felt they could portray a subject’s form more accurately by using geometric shapes to represent its various sides and angles. The use of geometric shapes replaced techniques such as perspective and shading, which also emphasized the two-dimensional flatness of the canvas.

The image below depicts Pablo Picasso’s painting called Girl with a Mandolin (1910), where various geometric shapes come together to suggest the form of a girl playing a mandolin.

Bright colors were not typically used in Cubist paintings until much later in the movement. Early Cubist painters favored tones of muted gray, black and ochre over bold colors such as green or pink. A simplified color scheme created greater emphasis on the structure and form of the subject matter.

The image below depicts Georges Braque’s painting called Still Life (Violin and Candlestick) (1910), where shades of brown and gray are apparent. Cubists simplified their color palette to place greater emphasis on the structure of the subject matter itself.

The picture plane is commonly known as the surface of the canvas. However, before Cubism, illusionistic painting treated the picture plane as a window into a scene, where subjects were depicted representationally and painters created the illusion of reality within the work. Cubists rejected illusion and believed that all elements of a subject should be visible on the painting’s picture plane. Cubists also thought of this as a more honest depiction of reality in comparison to their more traditional or “academic” predecessors.

The image below depicts Pablo Picasso’s painting called Bowl of Fruit, Violin and Bottle (1914), which, at first glance, shows multiple pieces of different objects that seem almost unrecognizable. Upon closer observation, the bowl of fruit, violin, and bottle appear to have been disassembled and then reassembled piece by piece, with every angle represented in a two-dimensional plane.

Analytic Cubism, the first phase of Cubism lasting from 1907 to 1912, is characterized mostly by paintings that represent a subject from multiple overlapping viewpoints within a single picture plane. The resulting artworks had a fragmented, geometric, and abstracted appearance. Analytic Cubist paintings were also largely monochromatic, using earthy tones.

Analytic Cubism differs from previous art movements such as Impressionism, where the composition is also fragmented to the point of abstraction. However, Impressionist artists used vivid colors that emphasized the effects of light on nature. Cubism, on the other hand, overlapped multiple angles and picture planes that caused the subject matter to look highly unrealistic or nonrepresentational.

Around 1912, the second major phase of Cubism emerged: Synthetic Cubism. While Analytical Cubism favored the analysis of deconstructed forms and compositions that represented multiple perspectives in the same picture plane, many artists working in the Synthetic Cubist style preferred to flatten their subject matter entirely, creating two-dimensional depictions of objects and people.

This new way of conceiving form would eventually prove the work of Pablo Picasso and Georges Braque to be influential beyond the conventions of Cubism. Many of the fine art movements that followed would embrace the many new techniques manifested in Synthetic Cubist artwork.

The neutral, earthy color palette of Analytic Cubism also evolved to include more bold colors and simple shapes, while maintaining the overlapping planes already central to Cubist works. The shift to bold and unblended color seen in Synthetic Cubism is often considered to be a precursor to the simple yet vibrant artworks of the Pop Art movement.

The political commentary that was important to the later phase of Cubism also influenced the art movements that emerged during both World Wars and the post-war period. The faceted, multi-dimensional forms of Cubism directly influenced many twentieth century artists and Modern art movements such as Dadaism, Surrealism, Futurism, Suprematism, Constructivism and De Stijl.