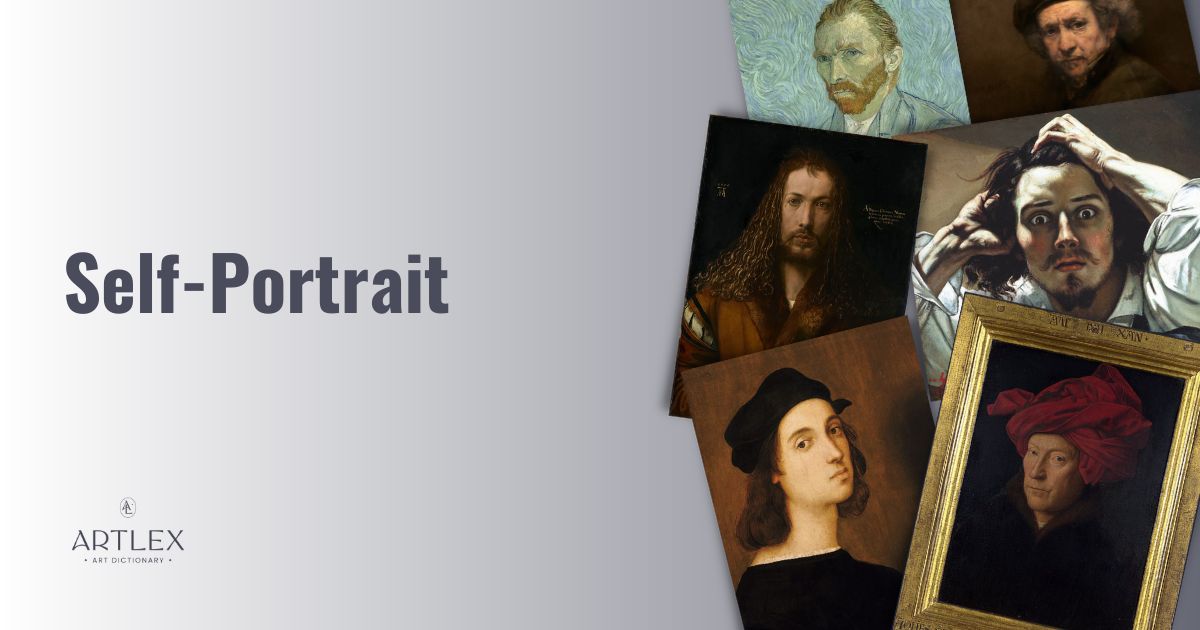 What is a Self-portrait?

Self-portraiture is a sub-category of the artistic genre of portraiture. A self-portrait is a portrait of an artist realized by the artist himself or herself, mainly through the medium of painting, drawing, sculpture or photography.  A self-portrait is hardly a mere form of recording one’s appearance: it involves very often the qualities, status, psychology, aesthetic taste of the protagonist. It is a form of analysis, self-definition and self-affirmation, and communication to the public. By extension, this genre in literature deals with the description that writers make of themselves and their vicissitudes and characteristics.

Self-portraits have existed since ancient times, in Ancient Egypt and Ancient Greece. However, self-portraiture developed as an autonomous genre during the mid-15th century and the advent of the Renaissance.

There are different kinds of classifiable self-portraits. They can be professional portraits of artists depicted while at work busy painting, psychological self-portraits that communicate moral and inner qualities of the protagonist, symbolic, allegorical, and not-literal ones, and even disguised self-depictions, where the artist illustrate himself or herself as a historical or religious figure. Insertable self-portraits are another frequent category,  where the portrait of the artist is hidden in a group of characters or a more complex scene.

A self-portrait is an art form that can be direct and explicit, but also allusive and symbolic. In both cases, it requires self-analysis by the artist and the desire to place oneself in a precise canon to affirm his or her own identity.

Scholars do not agree on defining the first self-portrait in art history. The subject of the artist at work was already widespread on Ancient Greek vases and in Ancient Egyptian paintings and depictions. However, the first self-portraits as an autonomous genre developed during the 1450s and they flourished during the Renaissance. The Portrait of a Man in a Turban by the Early Netherlandish painter Jan van Eyck, realized in 1433 and attested as a probable self-portrait of the artist, could be considered one of the earliest examples of the genre. Another prolific creator is the German painter and printmaker Albrecht Dürer, that during the Northern Renaissance dedicated several canvases to formal self-portraits and self-study.

The reasons for the popularity of the genre of self-portraiture in the Renaissance are to be found in the cultural climate of the period. During the Renaissance and Humanism, the interest in the individuality of human beings particularly flourished. The human genre began to become a subject of study for its psychological characteristics, spreading in art both the genre of commissioned portraits and the more experimental self-portraits.

However, in the 15th and 16th centuries the most common self-portraits were not formally recognized, but often inserted into a more complex painting. They were a way of creating a bond with the patron who commissioned the painting or, more simply, the artist served as a model for his/her characters. Among the most popular inserted self-portraits are the Arnolfini Portrait (1434), where the artist Jan van Eyck hidden in a mirror, Diego Velázquez in his Las Meninas (1656),  Sandro Botticelli depicted as a spectator in his Adoration of the Magi (1475), Masaccio who represented himself as an apostle in the Brancacci Chapel cycle, and even Raphael, who realized his self-portraits in the right margin of The School of Athens (1511). Italian masters of the Renaissance like Leonardo da Vinci also used self-portraits for psychological and physiognomic investigation: his famous Mona Lisa could be based on a self-portrait of the artist. Self-portraiture could also have allegorical purposes, such as Artemisia Gentileschi’s La Pittura (Self-portrait as the allegory of painting). The Mannerists, on the other hand, grasped the potential for artifice and illusion, as evidenced for example by Parmigianino’s Self-portrait in a Convex Mirror (1524).

During the 18th century, self-portraiture became particularly popular in the Dutch Golden Age, often combined with the concept of vanitas or as a form of status celebration. Among the most famous are the numerous self-portraits realized by Rembrandt at all ages.

In the 19th  and 20th  centuries, the genre of the self-portrait still took on different nuances and purposes. Many artists, such as Vincent Van Gogh, accentuated the narrative component by recounting moments from their lives, for example Self-Portrait with Bandaged Ear, and the symbolic component through the use of color.

In the 20th century, artists used the self-portrait in a psychological and self-diagnostic key, accentuating expressionistic deformations (such as Edvard Munch, Egon Schiele) or optical illusions (as in the case of Maurits Cornelis Escher). In 20th -century art, the self-portrait is still an instrument of self-discovery, personal mythmaking (Andy Warhol), and self-definition within a specific culture (such as Frida Kahlo’s Mexican culture).

The self-portrait in contemporary art is no longer necessarily representational but it can also be abstract. Moreover, with the invention of photography, it lost its characteristic static nature, exploring dynamism and experimentation, as in the photographic self-portraits of Nadar or Eadweard Muybridge. The practice of the selfie, a field of sociological and aesthetic investigation also for contemporary artists, is another common declination of the genre of self-portrait.