Mannerism is an art style and movement of that emerged first in Florence and Rome, at the end of the High Renaissance, between 1520 and 1600, before Baroque style emerged. The popularity of Mannerist art spread to become an international artistic style. It wasn’t until the late 18th century however that archeologist Luigi Lanzi used the word to categorize the 16th century artists who came after the great Renaissance Masters.

Why is it Called Mannerist Art?

In Italian maniera means style or manner. Mannerism was the term that referred to painting “in the manor of”. Mannerism initially was not considered a style, so the label was viewed a derogatory term. As Mannerism art developed, artworks from this movement were requested by royalty.

What are the characteristics of Mannerism art?

Mannerism art differed from Renaissance art in that in moved away from balanced compositions and idealized humanistic forms. A sense of movement came from all directions. Pyramidal composition was abandoned, along with linear perspective.  The Venetian School’s use of mythology and landscapes filled with architectural elements. Pastural scenes continued with art imitating nature.

Mannerist artists were free to be expressive when illustrating both life and nature. Most notably figures became elongated and thin, often non-weight baring. Mannerist artist used figura serpentina of twisted poses that appeared unnatural. The color palette was vividly artificial. Works were decorated elaborately. Human figures were densely packed into the works  and artists could create a highly artificial composition.

The End of High Renaissance

High Renaissance was at its peak in Rome between 1496-1527 with influential artists including Leonardo da Vinci, Raphael, and Michelangelo. Then the course of history shifted through several events.

The great patron of High Renaissance art, Pope Julius II died in 1513. Michelangelo spent much of his time sculpting the pope’s tomb, before finally heading back to Florence to work for the Medici family.

In the year 1517 Martin Luther took his 95 Theses and pinned it to the door of the Castle Church, in Wittenberg, Germany. He questioned the ways Pope Leo X was raising money to build the new High Renaissance designed St. Peter’s Basilica. Religious battles would ensue. The lives of High Renaissance artist changed and some ended.

Leonardo da Vinci spent the remainder of his life perfecting the Mona Lisa. The High Renaissance artist worked on numerous projects simultaneously, but most remained unfinished. He died while living in France, in 1519.

Raphael was busy working on St. Peter’s Basilica, when he died suddenly at the age of 37, in 1520. This was devastating to his school, students, and artist of the High Renaissance.

Finally, Rome was sacked by Charles V, the Holy Roman Empire and King of Spain, in 1527.

Mannerism art emerged due to the political upheaval and the lose of great artists and patrons. Mannerist artists wanted a chance to express themselves fully without the constraints of High Renaissance art and its perfection. There was also a collective realization among the earliest Mannerists artists that they would never compare to the masterful trinity of Leonardo da Vinci, Michelangelo, and Raphael and the High Renaissance.

The earliest Mannerist artist was Jacopo da Pontormo (1494-1557) known as Pontormo. The Mannerist painter was from Florence and trained with Leonardo da Vinci from whom he would take the techniques of both chiaroscuro and sfumato.

Originally a High Renaissance painter, Pontormo changed art history when he experimented with Mannerist painting. The painter worked on both religious pieces as well as portraits, including those of the Medici family. Pontormo was an inspiration to the earliest Mannerist artists.

Entombment of the Christ (1525-1528 ) bright with saturated colours, depicts a gray Christ in a serpentine pose, gently supported by two other weightless figures, seemingly with great ease. Others try to surround him in a densely constructed scene that appears almost swirling. This large alter painting for the private chapel of the Capponi family, at the church of Santa Felicita, in Florence,  added novelty to what was usually traditional. It was the first Mannerist painting to use such an unusual palette of color.

Another of Pontormo’s colorful works is The Visitation (1528-1529) depicting the Virgin Mary, and St. Elizabeth, both heavily pregnant, standing with two other women. The brightly garbed figures dominate the entire Mannerist painting in a tightly packed composition.

When  Italian artists Leonardo da Vinci, Raphael and Michelangelo moved away to Rome, Andrea Del Sarto ( 1486-1530) was lauded as the leading Florentine painter. Known for his depth of color, he had the ability to illustrate beautiful textiles, using texture, folds, and drapery, possibly because his father was a tailor. His masterpiece is considered The Last Supper of San Salvi (1519-1527) a fresco painting in Vallombrosan Abbey just outside of Florence. Jesus and his disciples sit in front of a white tablecloth, wearing robes of turquoise, orange, green and purple. Three windows above with foreshortened balconies allow two people to witness the event.

In 1524, Italian Mannerist artist Parmigianino (1503-1540) painted Convex Mirror, on a convex panel, using his circular 21-year-old image. This work of self reflection uses an angelic, idealized face, but with a distorted lens. The hand is especially elongated and enlarged in this Mannerist painting.

Madonna with the Long Neck or Madonna and Child with Angels and St. Jerome (1535-1540) is an extremely stylized version of the Madonna with her lengthy neck, with her elongated, naked son and a crowd of angels. Parmigianino had been commissioned to paint the oil, in 1534,  for Francesco Tagliaferri’s funeral chapel in Parma. Instead, the artists kept this Mannerist painting with him until his death in 1940.

Italian Mannerist artists Rosso Fiorentino (1494/1495-1540), painted works such as The Playing Putto (1518) or Angel Playing the Lute.  This closeup  shows a red haired, child angel playing the large yellow instrument against a black backdrop. Other Mannerist paintings by the artist include Deposition from the Cross (1521) and Moses Defending the Daughters of Jethro (1523).

Florence born, Mannerist painter, Agnolo di Cosimo (1503-1572) known as Brozino, painted Elenore of Toledo, the Spanish wife of Cosimo I de’ Medici, with one of their sons. Elenore’s dress carries the pattern of pomegranates, the symbol of motherhood. The dress in silk and brocade so dominates the painting that it becomes a work more stylized than idealized.  Bronzino’s  Allegory of Cupid (1545) is a risqué work, depicting  the mythical Venus and her son Cupid as lovers.

In Giuseppe Arcimboldo’ s (1527-1593) playful series of four works entitled Four Seasons the Mannerist painter merges humankind with nature, in the form of plant life and its harvest. Emperor Maximilian II commissioned the original set painted between 1563-1573. Today two of these Mannerist paintings are missing today. He commissioned a second set shortly after as a gift for Augustus, the Elector of Saxony which have remained together as a collection.

The Greek born El Greco (1541-1614) first moved to Rome and then Spain. Deeply religious he portrayed these scenes in his art. The Holy Trinity (1577-1579), an oil of canvas work shows Mannerist style with elongated figures, cast in heavy shadows and thick blank outlines.

The  colorful work shows the Heavenly Father holding the body of Christ. The Holy Ghost appears in the form of a dove. Angels stand behind, while tiny cherubs rest in the clouds at Jesus’ feet. The artist based this work on an engraving by Albrecht Dürer.

Michelangelo and Mannerist Painting in the Sistine Chapel

Last Judgement, (1534–1541) a Mannerist style fresco painted behind the alter of the Sistine Chapel was a departure from the previous works by Italian artist Michelangelo (1475-1564) had created there 25 years prior. Michelangelo once again proved he was a master of the human body by adding 300 figures to his composition all densely packed together. The figures here while showing perfect musculature are more stylized, twisted and elongated. The colors are more vibrant. Last Judgement is a feat of artistic virtuosity.

Christ and Mary are pictured in the center, with the damned on his left and the blessed on his right.

The work was commissioned by Pope Paul III after his election in 1534. The pope sought to legitimize the Catholic Church after the Sack of Rome in 1527, and to address the issues that led to the Protestant Reformation.

Following the similarly stylized aesthetic direction Mannerist paintings, the figures in Mannerist sculpture were elongated, elegant, and often intertwined. Works from this time were highly detailed.

Ancient Greek mythology is the topic of master sculptor Benvenuto Cellini’s (1500- 1571) Perseus with the head of Medusa (1545–1554). It stands in Loggia dei Lanzi, a building in Piazza della Signoria, in Florence, along with other sculptures including a copy of Michelangelo’s David.

The long and elegant body of Persus holds up the head of Medusa, who was known for turning anyone who looked at her to stone. The highly detailed and polished, Perseus with the head of Medusa, is made of bronze using the ancient technique known as the lost-wax casting method. It is a fine example of sculpture in the Mannerist period.

Giambologna (1529-1608) a Flemish sculptor based in Italy was a favorite of the Medici clan and commissioned him to make works such as Samson Slaying a Philistine (1562) and Rape of the Sabine Women (1583). His students another Flemish born sculptor Pietro Francavilla (1548-1615) would create extraordinary Mannerist sculptures including the mythology-based Apollo Victorious over the Python (1591).

The Cellini Salt Cellar is a gold table sculpture with enamel, ebony and ivory created in the Mannerist style by Cellini between 1540 to 1543 for Francis I of France. This is the only surviving example of his work in gold. The mythological theme features Neptune of the Sea and Tellus of the earth. It is a unique sculpture from the Mannerist period.

In 1524, The Medici family commissioned Michelangelo to build the Laurentian Library vestibule in the Monastery of San Lorenzo in Florence. The Mannerist architecture was a departure for the artists as it disregards classical antiquity and Renaissance classicism.

In 1527, Italian painter and architect Giulio Romano (1492/99-1546) who had apprenticed to Raphael, fled Rome. Duke Federigo Gonzaga commissioned him and his team to expand his hunting lodge. This soon became Palazzo del Te, a square blocked building with a central courtyard and garden, considered one of the finest examples of Mannerist architecture. The exterior was left rustic.  There is an obvious lack is symmetry, which was intentionally, in opposition to Renaissance style.

The Duke requested that the walls be decorated with mythological themes. The most lavish is the Chamber of Cupid and Psyche, with the full narrative depicted in frescos, alongside a red Verona marble fireplace.

German artist Hans von Aachen (1522-1615) painted portraits in Italy and was a court artist who received commissions from the Duke of Bavaria in Munich, before becoming a court painter to Emperor Rudolf II in Prague. He combined Venetian color with the disegno of Mannerism and was known for his luminous nude paintings.

The School of Fontainebleau was led by an Italian Mannerist Rosso Fiorentino, who was invited by Francis I to decorate the Palace of Fontainebleau, located 40 miles from Paris, in 1530

Mannerism and The Palace of Fountainebleau 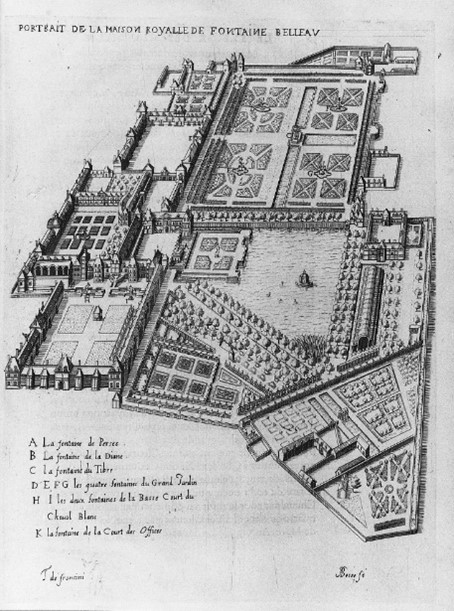 The Gallery of Francis I was built to connect the royal palace to the monastery. Between 1533 to 1540, Fiorentino was charged with designing and supervising artists who filled the space with frescos, elaborate woodwork and gilding all in the Mannerist style.

Frescos with stucco frames, bend, and curve into embellishments such as nymphs, putties, garlands, baskets and fruits: 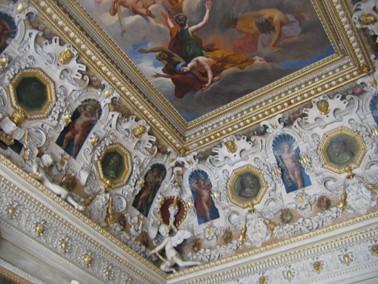 The End of Mannerism Art

Mannerism art began to fade in the beginning of the 1600s. A new highly decorative and dramatic period of Baroque art began. Mannerism had naturally evolved and gained its place in art history.