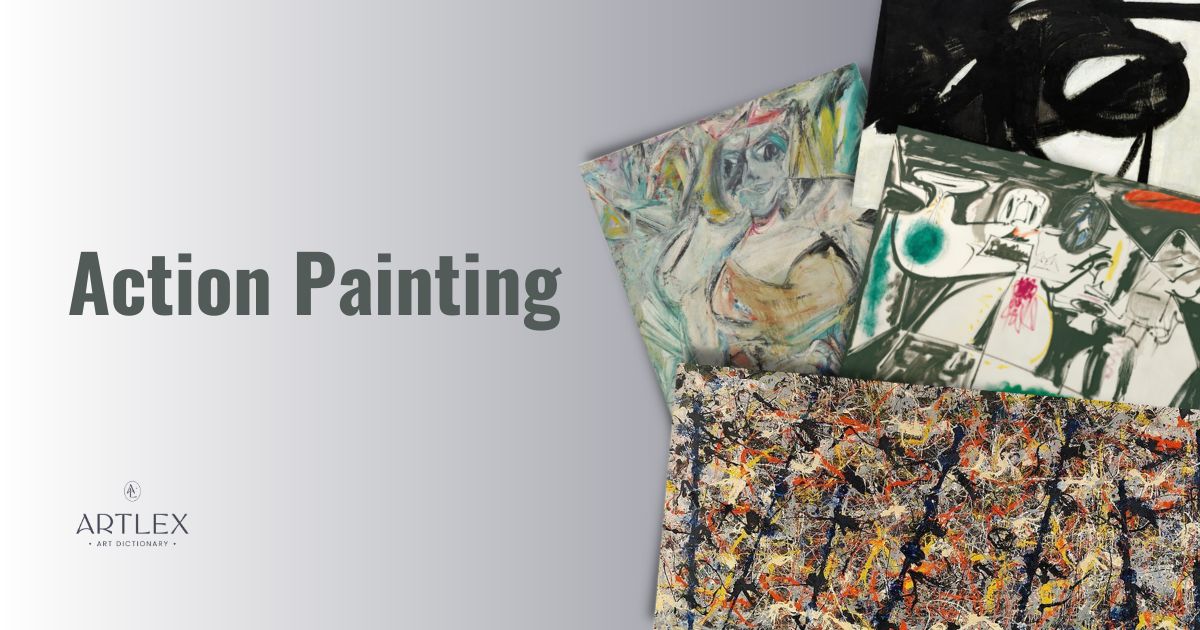 What is Action Painting?

The action painting, also known as “gestural painting,” is a style of abstract painting in which paint is spontaneously dripped, smeared, splashed, or poured directly onto the canvas. It emerged in the 1940s in the US among a group of artists belonging to Abstract Expressionism, including Willem de Kooning (1904 -1997), Franz Kline (1910 – 1962), and Jackson Pollock (1912 – 1956), lasting until the early 1960s. The nearest European equivalent to Action painting is Tachisme.

The Context of Action Painting

The action painting evolved at a time of unrest and anxiety after the end of World War II and at the onset of the Cold War. It was also a time when psychoanalysis began to flourish, changing people’s understanding of the world through self-consciousness. Action painters were absorbed by Carl Jung’s theory of the Collective Unconscious and were very much interested in the philosophy of Existentialism, especially Jean Paul Sartre’s description of human action as the foundation for identity. The action painting reflected all this: humankind in serious crisis, post-war feelings of anxiety and anguish, and the desire of expressing an authentic inner-self in a direct, unconstrained way.

Characteristics of Action Painting: Canvas as an Arena

The action painting is a highly impulsive, spontaneous, and intuitive painting technique producing abstract work characterized by vigorous and sweeping brushstrokes, drips, or direct pours of paint onto the canvas, often placed face-up on the floor. Some action painters, especially Jackson Pollock, used sticks and even syringes as paint applicators.

The term was first introduced by the American art critic Harold Rosenberg in his essay “The American Action Painters,” published in the December edition of Art News in 1952, to describe the work of a group of Abstract Expressionists who utilized the technique since the 1940s. In Action painting, the canvas is the arena in which the artist acts, painting not what he sees but what he feels. The resulting work represents a record, a gestural index of the artist’s physical act of painting, or according to Rosenberg, “not a picture but an event.” For action painters, the creative process was more important than the final result of that process.

The main difference between works made in the style of action painting and preceding abstract art, or contemporary “color-field” painters, is that the former were not preconceived works and represent an absolutely unfettered and spontaneous expression of raw emotions and energy of the artist. As told by Franz Kline in an interview with Katherine Kuh, “I don’t decide in advance that I’m going to paint a definite experience, but in the act of painting, it becomes a genuine experience for me… “[1]

Influenced by psychoanalysis, notably Carl Jung’s work and his theory of Collective Unconscious, action painters took the art of Kandinsky and Paul Klee further. They created a form of abstract art characterized by uncontrolled expression of the artist’s feelings, thoughts, inner impulses, and archetypal images stored in the unconscious mind. Pollock once explained his creative process with the following words: “When I am in my painting, I am not aware of what I’m doing.”[2] The Surrealists, many of whom emigrated from Europe to the US in the wake of World War II, and their fascination with automatic drawing as a way to liberate the psyche and reveal the subconscious mind also influenced action painting. The improvisation of Bebop and free jazz are some of the associations with action painting that art scholars cite.

The Impact of Action Painting

When it first appeared, action painting was fiercely criticized by art critics.  However, it turned out to be the first exclusively American art movement to achieve international acclaim and influence, placing New York at the center of the Western art world. Action painters inspired a significant change in understanding what art is and can be by emphasizing and valuing the creative act over the final product. Their revolutionary approach to the creative process influenced many art movements that emerged after action painting, such as Happenings, Fluxus, Conceptual Art, Performance Art, and Earth Art.